The Warrior/Goddess Dichotomy and the Eternal Feminine.

The unholy marriage of alien and cucumber 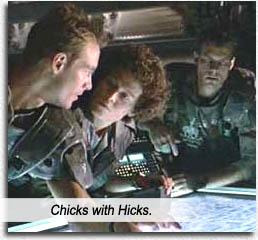 Writer-Director James Cameron helms this sequel to one of the landmark space/horror films of our time, ALIEN (1979). And it shows. Not one for subtlety, Cameron creates a script (with David Giler and Walter Hill) that bluntly screams “More is Better” – more aliens, more victims, more explosions and incredible amounts of more mucus. Surprisingly – he gets away with it.

A colony of humans on a remote planet has lost contact with Earth. [Director’s Cut scenes show the crashed “horseshoe” spaceship from ALIEN and a local family that goes to investigate. Bad idea. We see the father overcome by a “face-hugger” at the base of the horseshoe. We would realize later that the little daughter is Newt – the lone survivor that the Marines discover.] The military sends a reconnoiter mission, along with Ripley (Sigourney Weaver, recently rescued from suspended animation in a drifting escape pod some sixty years after blowing up the Nostromo in ALIEN). She is more than miffed that the planet she is forced to return to is the one she just escaped from.

Sho’ nuff, send the Marines in anywhere and everything gets pear-shaped. After aliens en masse peel from the mucused walls of the space colony corridors and decimate the grunts, the remaining Marines (under Ripley’s ad hoc supervision) must find a way to leave the planet and nuke it.

There are so many factors that make the ALIEN series so much more than just Running-and-Screaming debacles. A major factor was Swiss surrealist, H.R. Giger’s alien design, overseen in this movie by legendary creature-creator Stan Winston. The life-cycle of the aliens was also well thought out, which gave them an organic depth that simple zombies or big-eyed beige beings lacked. Like some interesting insect species here on Earth, the alien warriors do not simply eat or kill all their captives, but cocoon them to serve as host bodies for their hatchling stage (the face-huggers), which impregnate the captive with the seed that grows into the chest-burster (which John Hurt will never forget).

Cameron, who is renowned for his Wham-Bam, actually cleverly inserts major Thank-You-Ma’am into this movie. At first blush, ALIENS looks like any summer Boy’s Movie, but look closer and you’ll notice that it is actually a homage to the Eternal Feminine! All the males are either emasculated or ineffectual: Apone the Marine captain (Al Mathews) is dispatched in the first battle, Gorman the coordinator (William Hope) is bitchslapped by Ripley when he crumbles during a skirmish, Hudson the grunt (Bill Paxton, in an immortal sissy role which will haunt him for life) takes girlie whining to a truly vaginal level (“Game over, man! Game over!”) and Paul Reiser is perfectly cast as a corporate weasel. The most masculine Marine is Vasquez (Jenette Goldstein), a dirt-talkin’ hussy who has bigger guns on her arms and around her neck than any actual male Marine.

The only male worth his cahonnes is Hicks (Michael Biehn) – and even he ended up taking orders from Ripley. The other male of any note is Bishop the cyborg (Lance Henriksen, as a “synthetic person” who is ironically the most empathetic of the group) – and he gets torn in half. All the other male Marines were like those nameless Star Trek crewmen who beamed down to a planet with a different-colored titty-shirt than the principals…

Cameron boldly brings us Sexy Dangerous with Ripley: whereas in ALIEN she was an innocent youth who grew into her formidable anti-alien role (with a wink-wink end-scene that stripped her down to panties to remind us of her femininity), here she is the vetted warrior, tougher than Marines, yet maternal enough to dote on a surrogate child; she may slam the corporate weasel against the wall, but when Hicks gives her a location bracelet (“Doesn’t mean we’re engaged or nothing”) her alluring smile is radiant. Cameron has brilliantly created what every man craves – a woman powerful enough to stand on her own feet, yet beautiful enough to attract you into sweeping her off them. The Warrior/Goddess dichotomy. (If it weren’t for that soccer mom ‘do, she’d be perfect!) And he does it in such an artful way that we don’t feel threatened or repulsed by it. 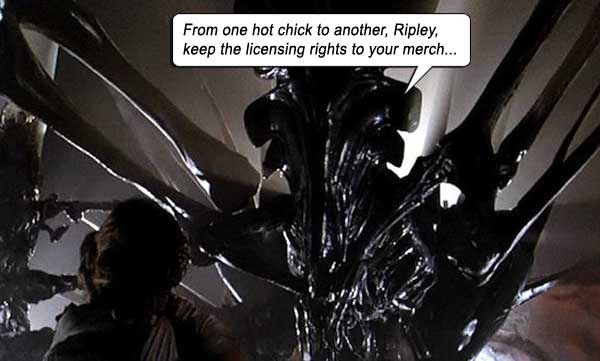 Even the final battle is between Ripley and the alien queen, as the queen chases Newt (young Carrie Henn, who never made another movie; although I really wish she would stop that insufferable, high-pitched screaming). Ripley interjects with the now-famous, “Get away from her, you BITCH!” – a female going after a female, being stopped by a female.

ALIENS is a thunderous movie, fulfilling our every craving to see bigger, badder, madder aliens and see them in full action, in full view. Boldly directed and edited, with incredible detail paid to the species that spawned so many inferior copycats. The egg-laying scene, in the cavern with the queen alien, is still a disturbing piece of icky cinema.

And in the film’s final minutes – even WITH all the female empowerment flying at our testicles – Our Man James Cameron somehow manages to get Ripley down to her panties again!…