These Boots Are Made For Stalkin.’ 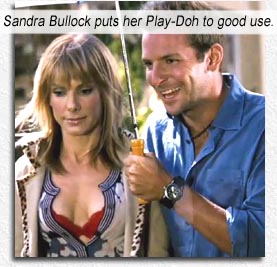 Sandra Bullock is sexually frustrated, lonely and crazy. Oh, and in this movie, she plays a sexually frustrated, lonely, crazy spinster named Mary Horowitz, a cruciverbalist (crossword puzzle creator) for a local paper, with a penchant for red leather fuck-me boots, so anal-retentive and uptight that when her editor tells her to be normal, she has to write it down as a reminder. Mary latches onto a cameraman named Steve (Bradley Cooper), who shuns her motor-mouthed advances. And then nothing happens.

In ALL ABOUT STEVE we are told the three criteria that make a good crossword puzzle: Is it solvable? Is it entertaining? Does it sparkle? Funniest thing about the movie is – the filmmakers think it describes this movie!

Which made me laugh. So I guess the movie achieved its goal of making me laugh.

Though Sandra Bullock stars and produces, though Bradley Cooper is the eponymous Steve (for which infatuated, attention-starved Mary creates a crossword with clues All About Steve after their first hasty date), the movie belongs to Thomas Haden Church, as on-site reporter Hartman Hughes. His narcissistic, mugging, deceitful, perfect-haired, chisel-faced reporter is so close to the real thing it is hardly a satire at all.

I expected more from Cooper, who does nothing here to distinguish himself; he is merely the hunky prop, not the dynamic masculine force he displayed in THE HANGOVER (released just three months before STEVE). In the end, we realize even his “good looks” had nothing to do with Mary’s clinginess. She is a shuttered, hopelessly lonely mental-case who just needs to have a wide circle of friends in order to vent her yammering; a wide circle because every one of those people would need to palm her off onto someone else very quickly.

Writer Kim Barker desperately ensures that Mary’s neurosis is palliated by making her pursuit of Steve a series of misunderstandings – as when Hughes lies to Mary that shy Steve really likes her only to set up a stalker situation for a good story. Which goes nowhere.

Even the resolution of Mary’s neurosis – when she garners a whole bunch of new hippie friends – is gutless. If she had planted a big one on D.J. Qualls‘s hideous lips at movie’s end (whom the movie spent time setting up as her mental equal) we might have excused it, but from the way she hugged him into The Friend Zone and cheered with the hippies, it seems she’s just an attention whore, needy and demanding that many people surround her at all times so that she doesn’t do something crazy like star in this movie.

Being a crossword creator, Mary is brimming, nay overflowing with useless trivia and can’t stop flapping her yap. At one point, a bus driver kicks her off the bus for her non-stop verbal diarrhea. Any man who would find this cute or endearing – is not a man. Now stay with me, people: Mary complains – as most women do – that “men don’t like smart women” (I guess she’s referring to herself as smart), but men and cucumbers alike love smart women. However, a woman who continually flaps her yap about inanities – believing that merely the act of talking makes her “smart” – we don’t like.

Mary complains that people ask her, “Where do you get all that stupid information?” Please, ladies, get this through that skull you purport to be smart under: the INFORMATION is not stupid. It’s what you do with it. It is excellent to be knowledgeable, or autodidactic, but to shove it arbitrarily in people’s faces – as Mary does – doesn’t display intelligence, but rather no social filters, inappropriateness, or just plain incognizance.

Jason Jones (from THE DAILY SHOW) is Hartman’s competitor reporter; Ken Jeong does a straight man turn as Steve and Hartman’s producer.

For those old enough to remember when movies came with actors and storylines, there is a tenuous allusion to ALL ABOUT EVE, the 1950 drama starring Bette Davis and Anne Baxter, in which Baxter’s fan becomes a rival to Davis’s aging actress. It’s clingy in another sense. In that it was a good movie.

And by the way, the answer to all those above questions – is no.