Man versus Ocean in a battle to the wet.

In the grand tradition of single-actor movies, ALL IS LOST fearlessly gives us Robert Redford (credited simply as Our Man) alone onscreen for the whole movie, an intrepid sailor, adrift on a boundless ocean after his yacht sinks, battling some fresh hell every moment to stay alive.

Our Man wakes on his small yacht, to the sound of water gushing into his cabin. He examines the wound in his boat, seawater cascading in, drenching the radio, phone, charts. Topside, he sees the cause: a floating shipping container has collided with his yacht and is stuck in the hole. He is calm as stones.

The water pours in every time the yacht lists to that side. With a watchmaker’s precision, he goes about clearing the damaged area, mixing sealant, then slowly but sure-handedly patching the hole, inside and out. And we live every arduous moment with him. As he manually pumps the sea from his domicile, dries his equipment, rigs a sling to patch the outside, climbs the rigging to fix the antenna, and sees in the distance… an approaching storm. Though Our Man regards his plight with startling equanimity, in our chests – immortal despair. Put yourself in this man’s place: the knowledge that you do not sleep cozy again until you work your way through this setback; that so much has to be done to get back up to zero. Eventually, he does sleep – in a makeshift hammock slung above the pond that is his lower deck.

Movie opens with the man’s dire voiceover: “I’m sorry. I know that means little at this point, but I am. I tried. We all agree that I tried. To be true, to be strong, to be kind, to love, to be right, but I wasn’t, and I know you knew this in each of your ways, and I am sorry. All is lost here. Except for soul and body – that is what’s left of me – and a half day’s ration…”

We imagine he’s on some kind of solo sailing mission. The type that begs the question in landlubber’s minds, “Why do people DO this?!” They must love the constant battle with the elements and adversity. We know the type, but we only hear of these wanderlusters on the news only when something goes terribly wrong and taxpayer time and resources are wasted trying to rescue their dumb asses.

Like Darren Aronofsky taking us into the skin of his protagonist, writer-director J.C. Chandor strands us in Redford’s mackintosh, out at sea and wounded. We are with Our Man as he tries to dry his phones and computers in the tepid sun, as he tries to call Mayday, as he realizes the storm is rising to meet him like a priapic lion and battens down the hatches, praying to whatever nonexistent god that his makeshift patchwork weathers the weather. It is exhilarating and terrifying.

I’m not a sailor, so I cannot tell whether Redford is battling the storm convincingly or inauthentically. All I know is, everything he does seems to come naturally and has a purpose, and his calm resolve is a welcome change from screaming and shouting, as many movies might have devolved to at this stage (and, of course, sparks coming out of equipment to denote malfunction.) Through the harrowing storm sequence, there are some beautiful underwater shots, at one point, his yacht going POSEIDON, tipping upside down, and we see him underwater just managing to grab a mast as the yacht rights itself, wrenching him up from the sea.

I hope someone gave an award to the sound designers – because when you close your eyes you are RIGHT THERE in this floundering boat; every creak every crack, every trickle, every deluge, every wind howl, every mast slam – we are there! Wet, shivering, hopeless. All is lost. 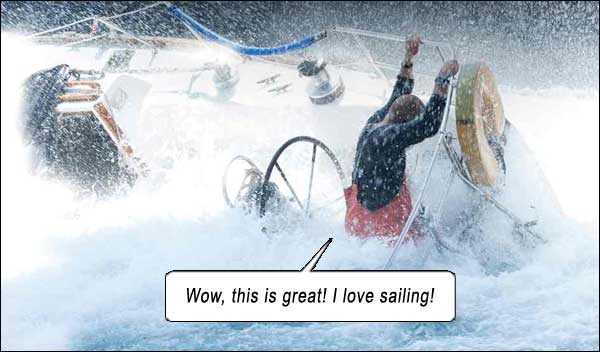 This movie might be saying something about the tenacity of the human spirit or the resiliency of the human body, or the bravery of the human soul – I don’t care. What affects me most in this movie – is the WATER. Although ALL IS LOST never conveys that Our Man is suffering inordinately due to wading in so much water, every time he has to do it, it just rattles my bones. All I’m thinking is: no place warm to sleep, no place to relax, water water everywhere. When his yacht dies, it doesn’t sink right away, and he must wade below the flooded deck to retrieve his drinking water and supplies. Again, we are with him through every mundane action, every moment a threat that the yacht will be sucked under. And this is not wading into your body-heated community pool. It’s the OCEAN. It’s the type of cold that they use to freeze dead bodies. It’s the type of cold that, if exposed to it for more than five solid minutes, you would suffer brain death. It’s not just freezing; it’s beyond the iciness you can conjure in your landlocked imagination sitting in that comfy chair.

Later, when he wakes in his last citadel of survival, his life-raft, we know he has only slept through pure exhaustion, and that it is not even a “cozy awakening,” but a “coming to” in dampness, in dankness; wet clothes, wet hair, wet socks, in an environment that IS only… wet. Horrible. My mind bends out of shape just imagining how any man could psychologically handle this. But Our Man is a true survivor. He consults the few charts he has retrieved from his sunken yacht and discovers he is in a shipping lane. But that ends up no help at all. This is, after all, not The Movies. So when a loaded freighter sails right by him, there is no joyous pointing and waving and orchestra swell and rescue. It just blares by on unheeding waves, no one on deck, no one in sight on the whole computer-driven, football-field long behemoth.

Unlike many One-Actor movies (GRAVITY, LIFE OF PI, CAST AWAY, 127 HOURS), ALL IS LOST actually is just one actor, with no peripheral characters at all. They tell us he is 1700 nautical miles from the Sumatra Straits, but this can be Any Ocean, planet Earth. And the most amazing fact is how Chandor (renowned for the wordy MARGIN CALL, now creating the exact opposite) sustains this thought experiment for an hour and forty minutes without drowning us in boredom.