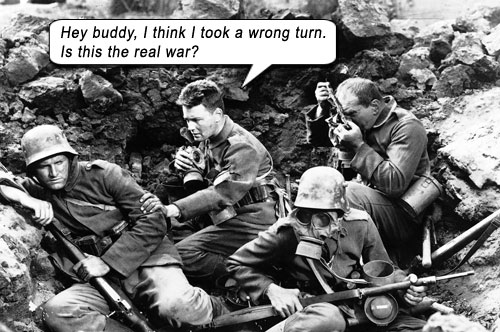 All quiet when it comes to war.

ALL QUIET ON THE WESTERN FRONT is arguably the first true anti-war film. An American production that follows a young German soldier through senseless World War I trenches, it is epic in scope, yet intimate in its emotional impact.

From a book by German Erich Maria Remarque outlining his experiences in WWI, director Lewis Milestone crafts a parable of horror that the human species still hasn’t learned from. Following the fortunes of young German high school boy Paul (Lew Ayres), movie takes us through the rhetoric of the marketers (“You are the life of the Fatherland! You are the iron men of Germany!”), the camaraderie of training camp, the outright fear and futility of the front lines, the isolation of hospital, the alienation of returning home, then the ultimate pointlessness of returning to the front again.

Filmed in stark black and white, the scenes of troop movements and large scale battles are as good as any today, and “uncommonly graphic for that era.” Apparently the censors of the day allowed the extra gore due to the “important” subject matter. Spielberg himself cites ALL QUIET as an influence on his own highly-copied, influential style in SAVING PRIVATE RYAN.

It must be qualified that ALL QUIET is an American production, with an all-American cast and crew. So it’s not like we should credit Germany for being so introspective; if anything, credit should go to Remarque for his singular tome. At that point in history, the tenor in Germany must have still been one of wary suspicion towards their victors – the Western Alliance (Britain, America, Russia, etc.). As with PATHS OF GLORY (1957, an American production that made the French look like war imbeciles), how hard could it be for a winning country to portray a defeated country as knobs? So though ALL QUIET is a remarkable film that does NOT glorify war, it is Americans not glorifying war from the point of view of the country they defeated. There is something petty and disturbing there that is never addressed in all discussions of this movie.

With this in mind, knowing that the human animal is a contradictory, self-serving, short-sighted swine, we continue… 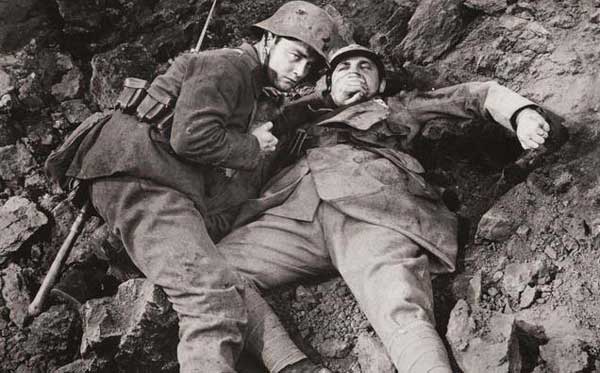 The horrors of war: someone who won’t shut up when you’re playing Hide and Seek.

Remarque opened his narrative with: “This story is neither an accusation nor a confession, and least of all an adventure, for death is not an adventure to those who stand face to face with it. It will try simply to tell of a generation of men who, even though they may have escaped its shells, were destroyed by the war…”

We are taken through every stage of how war affects men (except the political machinations that cause these conflicts in the first place). In a schoolroom, Professor Kantorek (Arnold Lucy, wide-eyed and crazy-haired), flies into jingoistic rhetoric inspiring the youth of Germany to enlist. The boys break out in fervent song, trample their books and march out the door – learning goes underfoot in favor of killing. The intensity and fervor is terrifying; Kantorek even chides Paul for having aspirations of being a writer: “Personal ambition must be thrown aside in the one great sacrifice for our country!”

John Wray is Himmelstoss, the local postman, who becomes a high ranking officer, harshly taking the boys through training. They disrespect him until his masochism strikes fear into them. At this boot camp stage though, it is still light-hearted, as the boys accost Himmelstoss and beat him in return. On the battlefield much later, Paul would see this torturer of young boys become a screaming coward.

Louis Wolheim is Kat, a veteran who shows the boys the art of survival amongst the trenches, how to recognize bombs, how to get food, how to handle loss. Paul’s own loss of innocence would come with the tragic fate of Kat.

In the trenches, as exploding bombs provide a constant drumbeat in the background, Paul’s unit sits out a long night trying to stay sane, enduring cave-ins, swarming rats, stir crazy boys and the thunder of war overhead. At some point in this interminable scene, we start to realize war is not about glamour and patriotism any more; it’s hardly even about fighting an enemy. It’s sweat and stench and neck-deep muck; it’s playing cards while the world falls in around you; it’s minutes that stretch into days and months and eternity.

Sudden action, as they must face the oncoming enemy in the trenches; awaiting bombs that screee through the blackened skies, crashing and breaking their fortifications, dust thrown up like choking curtains, advancing enemy soldiers overrunning their trench positions, then retreating again. (And keep in mind the advancing enemy – is “us,” the Western allies!) ALL QUIET is one of those movies that awakens the question: “How did it ever get to this state?” With men chasing each other back and forth over a muddied patch of ground, bayoneting each other, dying of horrifying wounds, kidneys stabbed, eyes shot out, hands broken, legs shattered by mines, faces torn by barbed wire… What the fuck is this all for? Because other men had disagreements. We can feel the insanity, the futility, the stupidity behind the decisions of the men with disagreements. It’s one of the first movies to capture and portray this. 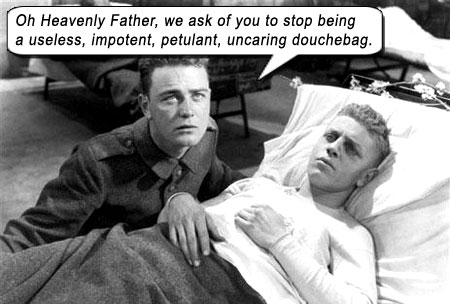 In lieu of the political machinations, we are given a snapshot of how the trenches regard those machinations. Thousands of war movies would come after ALL QUIET, and so few protagonists would question why they are in the midst of their culturally-created and wholly unnatural mêlée:
“How DO they start a war?”
“One people offends another–”
“I don’t feel offended.”
“Somebody must’ve wanted it.”
“Maybe it was the English?”
“I don’t want to shoot any Englishmen. I never even saw one until I came up here. I suppose most of them never saw a German until they came up here.”
“Well, it must be doing somebody some good. Like the Kaiser.”
“Well, he never had a war before. Every full-grown emperor needs one war to make him famous. That’s history.”

Kat offers a solution, and as childish as it sounds, it could have saved humanity a lot of blood and bone over the millennia: “They should rope off a big field and take all the kings and their cabinets and their generals, put ’em in the center dressed in their underpants, and let ’em fight it out with clubs. The best country wins.”

Then the scene that would seal ALL QUIET ON THE WESTERN FRONT as one of the firmest anti-war films of all time – the trench scene, where Paul, taking cover, stabs a French soldier, then spends two days and nights trapped with the dying man. A case study in human nature, as Paul goes through the stages of regret, remorse, trying to comfort the dying man, as shells rage above them. Paul tries to feed the spasming soldier some water, stagnant from the bottom of the trench; hours later, screaming at the silent, dying man in anger, “Don’t look at me like that – you’re going to die!” Hours pass, emotions rage across Paul’s face: anger, denial, guilt. Then the soldier dies, eyes open, in a half-sitting position. Paul: “If I could do it again, I wouldn’t do it!” He asks the dead soldier forgiveness. This scene is anything but heroic. It brings all the history lessons and high-minded political debates and nationalism and amorphous treaties down to the level of what “war” really is: people that don’t know each other killing each other for no apparent reason.

CITIZEN KANE is given its due amount of credit for so many pioneering filmic techniques, but movies like ALL QUIET remain at the forefront of our consciousness because they also revealed new cinematic techniques that live with us to this day. Was this one of the earliest uses of the tracking shot, as a camera follows the running soldiers across No Man’s Land, while bombs explode around them? All the actors veer onto the knife edge of theatrical overacting, but somehow redeem themselves by being in the moment as young and naïve.

Even as cries of “For the fatherland!” are replaced with disillusionment, the boys find small pockets of joy when they get a hot meal or a new pair of boots taken from a dead comrade. The inevitable meeting with farmhouse chicks – kept innocent for 1930s standards (but even broaching this subject was brave back in the day). 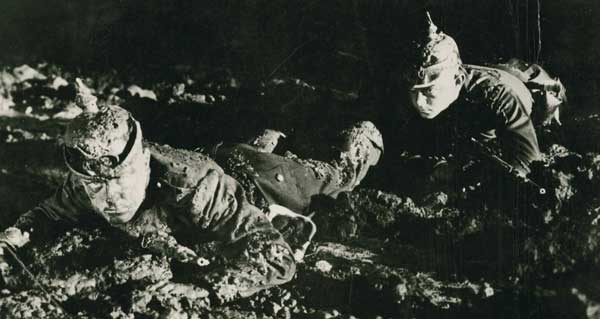 “Tell me seriously sergeant: When naked women roll around like this –
what have they got that I haven’t got?”

Paul is injured, sent home on leave, where he runs headfirst into the brick wall of ignorance. Ignorance of people who cannot possibly know what he has been through. If we thought the concept of the alienated soldier started only recently with PTSD (back then, called shell shock), here it is perfectly encapsulated. He visits his mother, who does not understand; he sits with old men and a map of Europe who do not understand, and finally, he visits his schoolhouse, where the same professor is spewing the same rhetoric to different impressionable young boys. Neither the professor nor the boys will ever understand…

Paul tries to humbly squirm out of making a statement, but the professor goads him into speech, and he rages almost uncontrollably: “…You still think it’s beautiful and sweet to die for your country, well, we used to think we knew. The first bombardment taught us better. It’s dirty and painful to die for your country! When it comes to dying for your country, it’s better not to die at all!…” The class is outraged at what seems like treason coming from Paul, but if the seed of truth is planted in just one of them – Paul has succeeded.

The final scenes are tragedy multiplied by tragedy, as Paul requests to be sent back to the front, the only “home” he knows. The final iconic shot shows his arm reaching for a butterfly – and a bullet claiming his life.

Like many war movies that rail against the horrors of war, ALL QUIET finds it hard to vocalize the reason why Paul felt at home when he was living on knife-edge in the trenches: because a soldier’s humanity is leached from him in training, in order to follow orders to murder effectively. With that leaching comes alienation from the human culture that they were once a part of. So they cannot rotate back into society. It’s a one-way street, grunt! But your very decision to join in the first place disallowed you to see that angle.

All may be quiet, but in the wrong way. Sanity is never heard from when it comes to war. All quiet on the sanity front, all the time.