…couldn’t put this movie together again.

At least Sean Penn doesn’t use ALL THE KING’S MEN as another vehicle to showcase his talent for crying on cue.

With a down-home accent that needs subtitles more desperately than Mel Gibson’s ocker in MAD MAX needed overdubbing, Penn plays Louisiana politician Willie Stark, a rambunctious gadfly who attempts to usurp power from government corporations and place it back in the hands of the people. 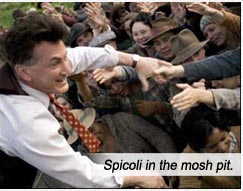 Written and directed by Steven Zaillian, ALL THE KING’S MEN is not exactly a remake of the 1949 Oscar-winning Robert Rossen-directed film of the same name (starring Broderick Crawford), for Zaillian consulted only Robert Penn Warren’s Pulitzer Prize-winning source book to craft this film. But that’s neither here nor there. I suspect that the original film, book, and real life person whom Willie Stark is modeled after – Southern populist politician, Huey P. Long – would mean nothing to moviegoers of this generation.

Which is why this film is so exhaustingly dull, despite its quality film-making, stupendous performances and sober messages. Cinematography is lush, soundtrack is overbearing and manipulative, and the period evocation (between the 1930s and 1950s) is ambitious, yet the film’s attempts to inveigle relevancy with the political climate of today and coerce a compelling drama from the power struggles of a man none of us particularly care about comes off as futile.

In reaching for the stars, the movie lands somewhere in pseudo-Louisiana by way of Britain. Three of the A-Listers – Jude Law, Anthony Hopkins and Kate Winslet – are too ingrown British to convey a sense of Southern ancestry… and let’s not even speak of James Gandolfini’s New-Orleans-by-way-of-New-Jersey accent…

Stark is a small-time politician, pawned into running for Louisiana Governor by Tiny Duffy (Gandolfini, playing some kind of political – er, gangster) to split votes between the real runners. When Stark realizes this, he goes from apologetic podium patsy to Joe Cocker Gone Wild, appealing enough to the hick demographic with his scared hair and mad dog gesticulations to actually win the gubernatorial seat in a landslide.Stark’s “promises to the poor were a declaration of war on the rich” (which is echoed in Michael Moore’s FAHRENHEIT 9/11, when he delineates the opposing sides in the “war on terror” as the wealthy leaders of both countries and their own poor), but instead of pursuing this thread, the movie unaccountably shifts focus to Jack Burden (Jude Law, as Stark’s unprincipled right-hand man).

Law’s character did indeed open the film, narrating voiceover, questioning the worth of exposed secrets, so though he is subsumed in the film’s first half by Penn’s overwhelming charisma, in eventually focusing on him, the film was, in fact, taking the direction it originally foreshadowed.

The junkets tell us that Stark becomes the type of elected official he rails against, self-serving and fascist; maybe it was the fact that the movie leaned on us to ally with Stark initially (as James Horner’s manipulative score informed us that his early speeches were inspirational rather than raving bonkers) that confuses us into not seeing the change in the man, for suddenly – he is up for impeachment. Besides the political reasons of funneling too much money out of corporate coffers towards public works (which is not a crime, and only lands Stark in trouble by annoying the politicians whose hedonism has been breached), there seems to be nothing criminal about Stark, except his overtly-gun-wielding bodyguard named Sugar.

By the time the movie has ignored Stark out of the leading man role, the eternal war between the enabled and downtrodden has been replaced by the eternal conflict between relevant and inane, as we find ourselves battling through tar to extract any kind of visceral enjoyment from what seem like extraneous sub-plots (Jack Burden blackmailing his own godfather (Hopkins); Patricia Clarkson as Stark’s jealous mistress, puling over Stark’s other affairs; Burden’s unconsummated love affair with Winslet’s character, Mark Ruffalo as some kind of meager-living, mourning-faced medical supervisor who allies with Stark against his will). Though all these characters are kept in motion by Stark’s megalomania, Stark himself is off somewhere practicing crying on cue.

Also distracting were impact noises inserted so gratuitously (to accompany passing cars or simple scene changes) that they were a dead giveaway that Zaillian lacked confidence in his story alone keeping audiences awake.

“Politician” has become shorthand for “bad guy,” but I found myself wondering whether the actual Huey Long started out as such an inspirational hurricane, openly decrying his opposition’s lies against himself and the public, as Stark does, whilst swearing and calling them sons of bitches. I found it hard to believe that American politics EVER retained that much honesty in its leaders, as modern American politics has become synonymous with duplicity. Does Stark naively discover that in order to do any kind of good, he must dirty his hands? “Ain’t nothing a man can do and keep his dignity. The human frame just ain’t built that way.” Or does he actively seize unwarranted power and exploit people to “rise above their principles” because he is inherently evil?

I didn’t seem to care either way, my credo always being, Politicians Be Damned. And never trust anyone who can cry on cue.

This movie may not “suck” in the traditional sense (JOHNSON FAMILY VACATION, HOUSE OF THE DEAD, THE PARENT TRAP, et al). It is just not everyone’s cup of tea. And I don’t drink tea.