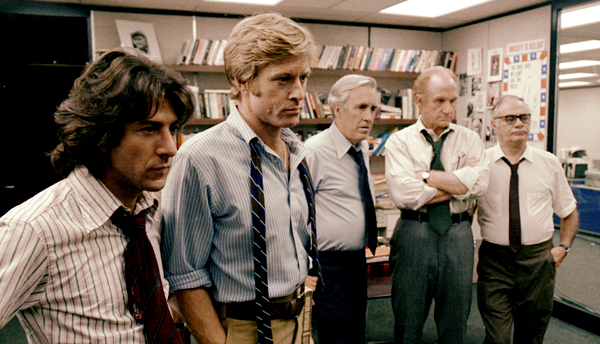 How many superb actors does it take to impeach a president?

Fall of the Imperial Presidency.

Watergate. Conspiracy. Burglary. Perjury. Courtesy of the 37th President of the United States.

Over the years, I’ve called Richard Milhous Nixon a “hellspawn from Satan’s own vagina”… and I see no reason to stop.

ALL THE PRESIDENT’S MEN is a powerful recount of specifically one event in Satan’s Vagina’s presidency that would define not just his wretched life and character, but ultimately the Republican presidential idiom – the Watergate Scandal.

Dick Cheney must hate this film. This is the tale of how that imperial presidency he has tried all his life to restore was lopped off at the knees. The story of ALL THE PRESIDENT’S MEN was the catalyst that created the cowardly thug Dick Cheney.

The 1972 exposés from the pages of the Washington Post newspaper (by young reporters Bob Woodward and Carl Bernstein) are breathed life on the big screen by screenwriter William Goldman and director Alan J. Pakula. Full credit to Pakula for making a dry political felony play like a mystery thriller, as Woodward (Robert Redford) and Bernstein (Dustin Hoffman) research the story behind the Watergate Hotel break-in by some of the president’s men, tracing it up the withered tree of liberty to the Oval Egg itself, indicting ALL the president’s men.

As Woodward and Bernstein knock on doors, make endless phone calls, meet, trick, cajole people to verify sources and information, we get lost sometimes amongst all the felons, because there are so many; this is real life and it is not a case of one Batman Villain and a coterie of faceless henchmen – each of the unethical, amoral, interconnected criminals contributed equally to the collusion and conspiracy that led to the burglary and illegal wiretapping of the Democratic National Committee’s headquarters in the Watergate Hotel in 1972. Even when reading the book (of the same name, by Woodward and Bernstein), you find yourself always turning to the Dramatis Personae to discern the players and their involvement – a bit like LORD OF THE RINGS, except in this drama, the evil characters are much more depraved, deformed and malevolent.

All overlorded by Satan’s Vagina.

Thankfully, the filmmakers did not portray the character of Nixon in the film (a shoddy lookalike or caricatured impersonation at best, which would have diluted the film); all we see of Nixon are a few real television appearances on news footage.

Set back in the day when telephones were rotary dial, when the irritating clack of typewriters had not yet been replaced by the annoying hum of word processors; back when Robert Redford’s feathered hair caused women unsuspecting panty accidents; back in the day when Dick Cheney used to skulk the halls of the Nixon administration as merely a staff member (no kidding!), waiting for the day he could push the imperial presidency further than the state of abuse it had escalated to back then. (He succeeded beyond his wildest craven desires with the Ku Bush Klan 30 years later.)

ALL THE PRESIDENT’S MEN is not about the investigation of the Nixon administration, nor about the 18 minutes of blank tape, or the forced, shameful resignation of Satan’s Vagina; it is not even about the hundreds of other unethical, malevolent deeds the president blast-farted onto American society (illegal Cambodia coverup of 1970, The HMO Act of 1973) – it is about the two men who exposed the scandal that would lead to that investigation.

Everything was on the line: Woodward and Bernstein’s reputations, the reputation of the Post newspaper, their jobs, ultimately their lives, the freedom of the press, and the Constitution of the United States. 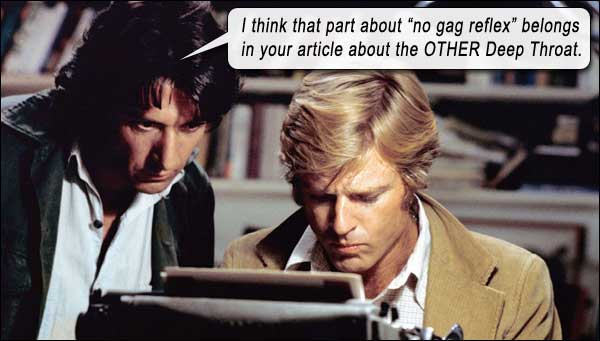 Woodward and Bernstein’s best source was the secretive informant known as Deep Throat (Hal Holbrook, eternally in darkness in the parking garage rendezvous point – thank Gordon Willis, the same cinematographer who notoriously “lighted” the dark, moody GODFATHER films). Which raised the eternal question: which came first, the presidential informant or the whore? Turns out there was no distinction. Linda Lovelace (DEEP THROAT, 1972) could have just as easily abrogated the duties of president and the president was overqualified to be a whore. We would learn over three decades later that Deep Throat was W. Mark Felt (revealed 2005, died 2008), the second highest officer in J. Edgar Hoover’s FBI.

Woodward and Bernstein worked so intently together on the Watergate scandal that their superiors took to calling them “Woodstein.”

Incredibly realistic acting makes this look like a documentary at times, from every supporting player, to the major stars at the Post: Jack Warden, Martin Balsam and Jason Robards (as editor Ben Bradlee).

the irony of evil

Nixon was the man who proved to the United States of America and the world that the post of American President was, in fact, “just a job.” Though we suspect that of all politicians, there was always that façade of altruism – that Brylcreemed lie of service to the people.

With Nixon, the facade was hosed off, the curtain was pulled aside, no shred of altruism left to disguise. It was suddenly crystal clear that a person in public office was only there to benefit themselves; it was purely and simply about retaining The Job at absolutely any cost, be it immoral, unethical or utterly criminal. Most of us would do the same to retain our livelihoods.

No more whitewashing the public with platitudes. By the end of his ignominious term and a half, Nixon had stolen the innocence of America. He stank of duplicity, dishonor, death, unquenchable evil. That’s why Republicans love him.

The irony is astounding: the man who most convinced the world to retaliate against the Nazis – was Hitler himself. Just as the man most responsible for America voting a Democratic president into office in 2008 – was Republican George W. Bush! So too, the man most responsible for losing the American public’s faith in high office was – the man who inhabited the highest office in America, Richard Milhous Satan’s Vagina Nixon.

In his infamous David Frost interviews in 1977, Nixon shocked the world by proclaiming, “If the president does it, it’s not illegal.” In 1980, he would testify as a character witness to Mark Felt himself, regarding White House leaks, maintaining that his presidential authorization to Felt meant that what would otherwise be unlawful or illegal becomes legal. The exact same apologist stance that spineless Ku Bush Klan mannequin Condoleeza Rice would take in 2009 for the imbecile boss for whom she somehow had a girlie crush.

ALL THE PRESIDENT’S MEN ends with Nixon being sworn in to his second term, on a television in the foreground, while in the background, Woodward and Bernstein type up the damning information which would bring down the administration and change the course of the blood red river of American politics forever.

Well, at least until Dick Cheney got his stinking hands on the presidency.