In ALONG CAME POLLY, Ben Stiller is yet another dweeby nebbish, Jennifer Aniston, yet another luminous man-toy, carnal love muscle. How do writers squeeze any further substance from these same drop-dead-boring characters? 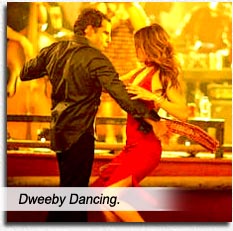 But along came Philip Seymour Hoffman; though regarded as a sober Actor’s Actor, injecting a scathing hilarity to this rotted roadkill of a film. Playing the Hero’s Best Friend, Sandy, Hoffman uses his disheveled pariah character like a wrecking ball on this milky-vanilla story, outshining the stars (Aniston and Stiller), the veterans (Alec Baldwin as an insurance company head, Bryan Brown as a dicey insurance prospect) and the relative newcomer (the insipid, underweight and overpaid spinner, Messing, of WILL AND GRACE “fame”).

Hank Azaria must also warrant mention, as a buff scuba instructor with a silver-tongued “Movie French” accent (responsible for breaking up Reuben’s marriage) – but this is unequivocally Hoffman’s movie.

Ironically, Hoffman’s Sandy is a struggling actor, living on laurels twenty years old (when everyone knew him as “The Kid from CROCODILE TEARS”), taking on the roles of both Jesus and Judas in a community theater production of JESUS CHRIST SUPERSTAR, and playing basketball with an ineptness that would send most wiggas to the bench for life – if it weren’t for his delusional “white chocolate” fury. His dialogue is gold, not least because of its delivery: “Raindance!” “I sharted!” “His art sucks, but he used to sell me really good pot”; and he even Saves The Day in a subplot which sees him take on his most challenging acting role – that of stand-in insurance salesman for Reuben while Reuben conforms to Romantic Comedy protocol by Running Through Streets To Stop His Girl Leaving Town.

Hoffman gets 8 stars. The movie gets only one – Philip Seymour Hoffman.