In ALTERED STATES, Eddie (William Hurt) and Arthur (Bob Balaban) are two university scientists experimenting on human regression (mentally reverting to a primitive state) using an isolation tank and sensational drugs, with Blair Brown (the Rene Russo of her day) as Eddie’s supportive yet doubting wife. Back in the day when university professors could drop LSD scored from Peruvian tribes and sleep with their college students without Jesus Christ making a big stink on national TV. 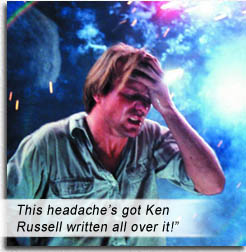 Eddie uses himself as the subject in the iso tank, driving ever deeper into sensory deprivation until director Ken Russell has to invest in extra creamy special effects to emulate the sensory overload a la 2001: A SPACE ODYSSEY meets TRON. When a Primal Man eventually pops out of the iso tank, everything – as they say – goes ape.

Loaded with intelligent dialogue (often in well-executed overlapping arguments) and thought-provoking concepts, such as psychosomatic regression, expansion of unused brain lobes, ALTERED STATES almost attains that classic “disturbing” movie state (shots of regression back to cellular states, shots of organs functioning within the body, the Dune Worm state – !), but the Primal Man brought the movie to a screeching fourth-grade halt.

It is, after all, just someone in an ape suit.

Wacky psychedelia fireworks the movie’s last sequences and we envy Eddie’s LSD – musta be some deluxe shit he scored from those tribespeople for it to short out the electricity in the university with Movie Sparks, crush all the pipes, blow out the windows and turn the isolation tank into a whirlpool…

The greatest gift of this movie is that Balaban and Hurt can take the characters they play here – intelligent, clinical overdork scientists – and insert them unflinchingly into every single movie they make (from Balaban’s 2010: ODYSSEY TWO to Christopher Guest’s comedy oeuvre; from Hurt’s THE BIG CHILL to MR. BROOKS), and never alter their state!