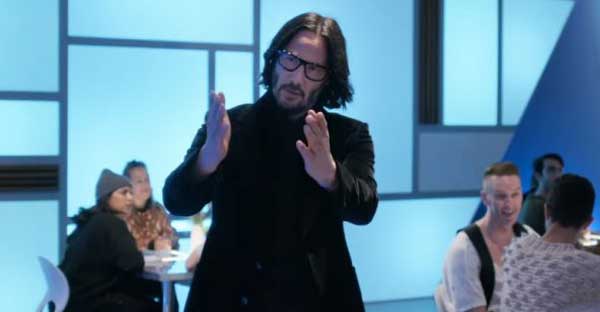 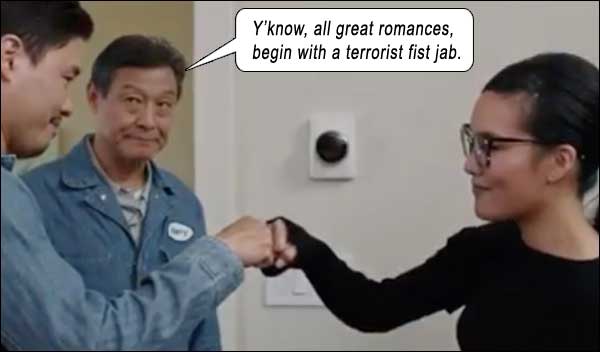 Alright, Hollywood, we get it: POVERTY IS NOBLE! How many times must you beat us across the ‘nads with this demonstrably fallacious message?

ALWAYS BE MY MAYBE follows a young girl and guy couple from their middle-class friendship in grade school to their adult lives in two very different social classes, constantly pounding pounding POUNDING the lie that the rich person (Ali Wong as Sasha) – with the beautiful home, the globetrotting chef career, the ambition and the expertise to back it up – is miserable. For one reason alone. Because she is not with the poor person (Randall Park as Marcus), who has never left town, and still retains all the same elements of their middle-class youth into adulthood – his car, his band, his friends, his room at his parents’ house, etc. Make no mistake: the poor person is painted as the stable, happy one.

Movie constantly portrays rich Sasha as secretly despising her upper-class lifestyle (opening restaurants, attending press junkets and catering wrap parties), while poor Marcus is the steadying force in her life; he might seem awkward, but is more at peace with himself than Sasha, who is only playing a role (i.e. the scene where Marcus pinpoints Sasha’s fake “telephone voice”). Marcus just loves his lower-class life (Sasha: “So you never want to step outside of this community, like, ever?” Marcus: “San Francisco’s my home. These people are my family. I’m good”). Thus, he is among family while she is among strangers (“When I want to fart I have to go to another room”).

Like every romantic comedy— [oouweh!… sorry, I just threw up in my mouth a little] the contradictions fly at us with the thrust of virgin sperm. Why does Marcus even want to be with her at this point? She’s been wooed by so many dollar-masculine partners and sullied by so much high-class penis, how could he hope to win her over with his repairman salary and Axe bodyspray?

Now let’s get this straight: being rich didn’t make Sasha shallow – she is shallow to begin with, and rich because she made the right career choices. Proof? Why else would she stay with her callous, unloving fiancé (Daniel Dae Kim) if not for the fact he is a chiseled billionaire who helps her career? She says she loves him. But, Movie, do you really want us to root for a character who is that stupid; that can’t see through the façade of her loveless relationship?

To drive home the point that Marcus and Sasha will be an item by film’s end – like we couldn’t tell that from the trailer 3 months ago – they set each of them up with airhead partners, easily disposable. But those partners are also revealing a truth about the protagonists, no? It means they were with those partners for the Wrong Reasons. Which makes them shallow themselves, right?

Sasha will admit later that she had a crush on Marcus for 18 years, which prompts Marcus to fall toward her in the final act—but record-scratch that! When they had hormonal sex as 18-year-olds, she walked out on him for the barest of Movie Reasons. Now, 16 years later, she is a rockstar and he is a repairman. And after traveling the world as a rich businesswoman, she hasn’t met anyone of her status that drives her juices the way an incompetent 18-year-old did in the back of his car? 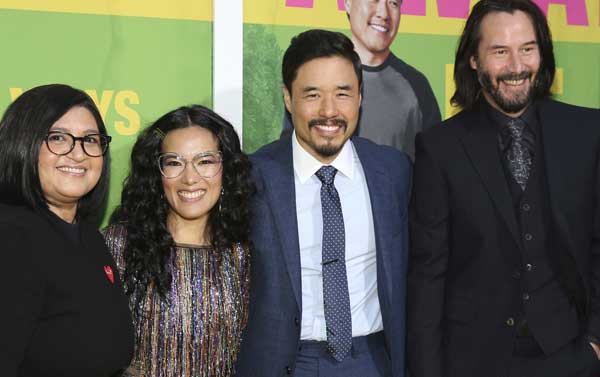 This dreck is only considered a romantic movie because the filmmakers tell us it is.

After spending a day in the ghetto:
She: “Thanks for reminding me how it feels.”
He: “How what feels?”
She: “Home.”

Don’t you mean “poverty”? Because only poverty can make you truly happy. Marcus even has a beige hip hop band that he refuses to expand out of his neighborhood and take on a world tour (as if that’s a choice that HE can make) because he decries the fame and fortune. Because that’s NOBLE. Sez Hollywood, preaching from its golden altar of hypocrisy.

Even when they become an item, Marcus and Sasha are at constant loggerheads on their differing lifestyles. They have The Sex (as adults) early in the third act, so even though they coo at each other as boyfriend and girlfriend for a short montage, we know there is adversity to come before the conclusion. Yet, the adversity is false, and the resolution is even more false, with an execrable happy ending that stinks of crow-barring in life situations to make everyone happy and successful.

At movie’s end, the couple is slyly paired, with no one mentioning how her wealth is contributing to their happiness (i.e. she’s opened another successful restaurant). But they don’t mention the wealth because they are STILL PUSHING THE NOTION THAT POVERTY IS BETTER. You see, she proudly shows off this restaurant’s menu as authentic Chinese food like their parents used to make. Because POVERTY RECIPES are better than all those richie recipes that leave you hungry (that they’ve experienced many times throughout the film).

How much is she charging for that food? Well, that will depend on how much her rent is, and cost of materials and salaries and utilities and a million other expenses – but I bet, with her world-renowned reputation, she is charging way more than poor people can afford – the same class of poor people whose recipes she stole.

And then – Keanu. Someone somewhere had a phone number, a chance meeting, some six-degree coup…  and Keanu Reeves takes time off from his killing schedule to saunter onscreen in slomo, garbed in all-black, as we imagined he would be, in an absurdist take, playing himself, as one of Sasha’s self-absorbed boyfriends. In the only truly funny segment of the film, Keanu lets his mythic hippie freak flag fly: “Do you have any dishes that play with the concept of time?” His Q off the charts at this point in Earthdom, so movie takes the opportunity to put the Noble Poverty shtick even in his sensual vocal fry: “That’s what it’s all about. Laboring in obscurity, struggling and starving.” Royt. But for the greater goal of selling your product wickedly, right? Keanu himself is a testament to this. He labored in obscurity, struggled and starved, but with a goal to become exactly the opposite. To escape THE MATRIX, not let it fill your head with its gelatinous bullshit.

The cretinous poverty-loving message of ALWAYS BE MY MAYBE outshines its underlying achievements. Crowding through the door that CRAZY RICH ASIANS kicked down, Randall Park and Ali Wong co-write, co-produce and co-star in this film where Asians play all the lead roles, with Park even contributing to his movie band’s shit hip hop songs, which he performs vocals on quite authentically. Despite the movie being so callously cookie-cutter and formulaic and wrong-headed, I have unbounded respect for filmmakers who bring their product to completion through the stultifying ignorant hell ride called the American Film Industry. And with the added adversity of promoting a niche demographic that Whitey Hollywood doesn’t see as bankable. All with a director making her feature film debut (Nahnatchka Khan). Power!

So I guess Park and Wong couldn’t get their film funded any other way. Isn’t it ironic how the avaricious rich people in charge will only allow your movie to be made by making you scream at the top of your lungs how it’s so goddamned beautiful to be poor?