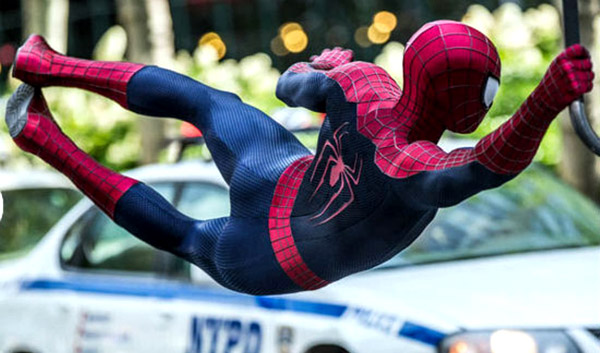 “The last time I was in this position, I had to go to confession afterwards.”

In THE AMAZING SPIDER-MAN 2, Peter Parker/Spider-Man discovers his lost father’s work has come back to… bite his amazing ass. As Spider-Man faces off against a new antagonist created by electricity (Electro), a more familiar antagonist (the Green Goblin) seeks his blood – literally – for a transfusion to save his own life. 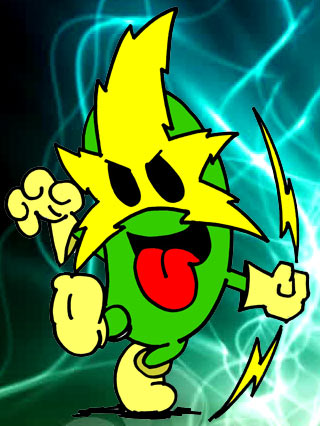 In a blaze of quipping and thwipping, we meet Spider-Man (Andrew Garfield) thwarting an armored truck robbery. Immediately we are privy to his goals: this crime-stopping gig is making him late to his own graduation ceremony, as his girlfriend calls him while he’s stuck to the grille of a speeding villain’s truck trying to shake him loose. “I’m stuck in traffic!” he tells her. His manner is devil-may-care, his virtuosity is astounding, as he acrobatically webs and words his way through the criminals. Spider-Man’s ethos has always been one of loose play-fighting, rather than powerful smashing; avoidance, and using the opponent’s excitability against them. Garfield pulls this off much better than Tobey Maguire.

These first ten minutes fantastically capture Spidey from the comics: a person who doesn’t take crime fighting too seriously; who is so far above the expertise of common criminals that he can afford to have fun with it. The angles, the movements, the web-slinging all capture the comicbook so perfectly, it jolts us back to our youth. Much about this movie is… amazing… not least, the way they’ve captured Spidey’s slim body in that redesigned suit (after fan uproar from the last movie, the filmmakers went the extra mile to design a more authentic suit – with nice big white eye-plates!). Spider-Man is not “rounded” any more, as he was drawn by veteran artists like Steve Ditko or John Romita Sr. or Jr. (which is how Tobey Maguire’s body was represented); he is slimmer and more action-lined, along the lines of more modern artists like Mark Bagley or Todd McFarlane. And I love the shape of his head.

This first masterful fight scene alternates with his girl Gwen Stacy (real life girlfriend Emma Stone) giving a graduation speech that needs to dial down the foreshadowing “…I know it feels like we’re saying goodbye, but we will carry a piece of each other into everything that we do next…”

THE AMAZING SPIDER-MAN 2 is an excellent continuation of the rebooted franchise. It’s dynamic, poignant, bombastic and colorful and funny; each main character faces a battle within himself; there is rekindled friendship, forbidden love, and a death in the family. But it was ravaged by critics and fans. Because people are stupider now than at any other time in the history of movies. The dumbest amongst us are rising to the top through social media savvy. Retweets and the simplicity of creating disparaging YouTube content has imbeciles dictating what is quality without the faintest idea what quality is. Thus, in this era, many good to great films are being reviled for no reason other than uneducated people with no grasp of grammar typing uninformed comments. Such is the case with AMAZING SPIDER-MAN 2, maliciously derided for seemingly no rational reasons.

Opening scenes show Peter Parker’s father (Campbell Scott) in a sad farewell, closing the front door between himself and boy Peter; we sense the sadness in Peter as he grabs at his father’s hand… It’s not just Peter – *I’d* love to see more scenes with the great Campbell Scott. And then – we do! The filmmakers (writers Alex Kurtzman, Roberto Orci, Jeff Pinkner and James Vanderbilt, and director Marc Webb) go further than the short mysterious parting they teased us with in AMAZING SPIDER-MAN, following the fate of Mr. Parker, his wife (Embeth Davidtz), and his classified experiments, and their eventual fate at the hands of people stealing Parker’s science. It’s a very somber opening scene that sets a tone the movie itself cannot match – yet the filmmakers piggyback off this emotion in later scenes when they need to bring gravitas back into the quipping young Parker’s life.

Don’t even know whether it’s canon or ret-con, but Peter’s dad is shown working at Oscorp, alongside the head of the company, Norman Osborn (Chris Cooper). They create the radioactive spiders (one of which bites Peter’s teen ass in later years, to make him Spider-Man), a by-product of a formula to cure Norman’s degenerative disease. Norman’s son Harry (and Peter’s best friend) is played by androgyne Dane DeHaan, who suffers from the same hereditary disease as his father; he would petition Spider-Man for his blood, realizing Spidey is an inadvertent successful product of his father’s experiments; and then would resort to donning the New Green Goblin suit to halt the disease. It’s all interlocked quite nicely. 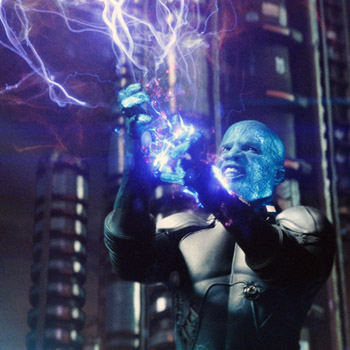 Maybe Green Goblin’s predicament being so interwoven with Spider-Man’s history is what makes Electro’s tale seem somewhat insipid by comparison? Max (Jamie Foxx) is just a low level employee at Oscorp, a Lonely Guy who believes Spider-Man is his friend because Spider-Man saved him once and sarcastically quipped he “needed him.” Max falls into a tank of well-placed electric eels (because corporations regularly leave the lids open on their eel tanks) and is then able to manipulate electricity. Thankfully, he doesn’t wear yellow and green spandex (that would’ve been way too evil for PG-13).

One of the film’s best scenes is when Spider-Man faces off against Electro in Times Square, and through some stunning editing and directing, alternating slomo and zoom-pans, we see how he saves a whole bunch of people from an electrified beam. Strangely enough, another great scene involves no fighting at all: when Spider-Man is sitting quietly and talking with Harry Osborn, denying him his blood. We realize that we always see this red-and-blue hero in action and it is so cool to just see him in a loungeroom environment that isn’t blowing up and CGI’d.

Peter is hounded by the specter of Gwen’s dead father (Denis Leary), whose dying words to Peter/Spidey were not to date Gwen. It’s the right thing to do, because simply being with Gwen puts her in danger (him being Spider-Man an’ all), and ignoring her puts his testicles in danger (of exploding).

Poor Andrew Garfield – he makes a terrific Spider-Man; threading that dichotomy of tragedy and humor, pathos and levity. His ousting from the role is a combination of his outspokenness and corporate bullshit. The young pup who dons the underoos in CAPTAIN AMERICA: CIVIL WAR (Tom Holland) is not a patch on this guy! Oh, he’ll do a fine job going forward – he has the greatest production teams in the world – but a “better” job? Sigh…

In a monumental tease, we see a man walk past glass tanks containing the wings of the Vulture, the arms of Doctor Octopus and the armor of the Rhino. There were plans aplenty to keep this iteration of Spider-Man moving forward. Now shadows and dust, due to greed and cowardice. The only payoff is the Rhino (Paul Giamatti), who appears in a cliffhanger scene that finds the hero rising to the challenge after his lowest ebb – as any hero must – and swinging dynamically into action once more.