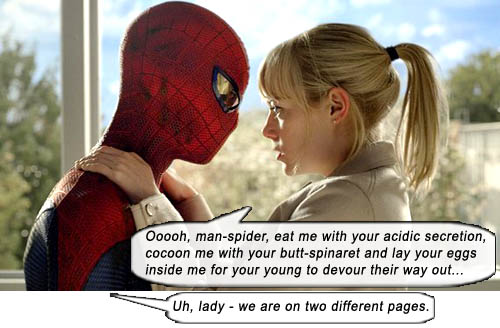 THE AMAZING SPIDER-MAN is the latest RE-imagining/ RE-boot/ RE-working of Spider-man canon. RE RE RE… Here’s my word for it – REally? Did we really need to sit through 40 minutes of another origin tale – again? In this very well-made movie, over half of it is wasted plying us with Spider-Man’s Same Ole geek-bitten-by-spider-acquires-spidery-powers exegesis. (In a cool move, director Marc Webb – no, really – and writers James Vanderbilt, Alvin Sargent and Steve Kloves, throw in Peter Parker’s never-before-seen dark origins as well, lending more angst to his troubled teen.)

Why not hit the ground running? May I propose that Marvel and DC create one-minute bumper montages for each of their superheroes, outlining their origins? And run these bumpers before the opening of each respective film; maybe put them in song, like GILLIGAN’S ISLAND? “Just sit right back and you’ll hear a tale / A tale of a fateful bug…”

AMAZING SPIDER-MAN is so well-made (with such a gritty look and suave production design) that I look forward to seeing this team’s sequel, where they are not hobbled by origin tale. 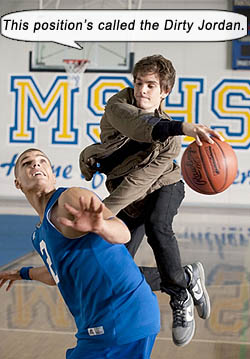 And Spider-Man’s head is, once again, the exact perfect roundness.

It’s a less campy vision than the Sam Raimi/Tobey Maguire SPIDER-MAN, and – like all the modern superhero movies post-BATMAN BEGINS – trying to squash the square characters of the comics universe into the round holes of the real world. With our willing suspension of disbelief, AMAZING SPIDER-MAN amazingly succeeds.

Welsh Rhys Ifans does such a convincing American accent as Dr. Connors, I thought they were dubbing his voice at first. In trying to find a “cross-species genetic formula” to grow back his missing arm, he experiments with lizard DNA (because some lizards have the ability to grow back tails and limbs) and inadvertently transforms himself into a scaly naked bipedal reptilian – no, not Dick Cheney – The Lizard. The injection of genetic serum is played more like an addiction than a criminal mastermind plot, to the filmmakers’ credit.

Incidentally curbing small-time crime in his hunt for Uncle Ben’s killer, Parker starts to feel a responsibility to do so after awhile. (There is no melodramatic pitch: “With great power comes great responsibility.” That concept is more subtle here.)  When Parker takes the advice of those around him – to leave the apprehending of perps to the police – he finds that Leary’s police captain will not believe him about the Lizard, so takes that task upon his own skinny shoulders. (Spidey’s build has always been more whipcord than Herculean. Garfield’s rail-thin build suits Spidey perfectly. And due to the better technology, we feel Spider-Man’s litheness and athleticism more during his web-swinging than in the Raimi films.)

The Indian Gary Sinise, Irrfan Khan (SLUMDOG MILLIONAIRE), is a scientific colleague. The great Campbell Scott has too little screentime as Parker’s father. Stan Lee in another of his hilarious cameos – as an oblivious librarian. There is no J. Jonah Jameson. Really? No loudmouth public nemesis to play off? But the film doesn’t need that complication – it’s already provided by Leary.

Playing police captain, Denis Leary does a bangup job as a straight man with a sardonic sense of humor, whose monologues about vigilantes (such as Spider-Man) once again shows us the thoughtfulness that went into this production, firmly entrenching it in real world environs. 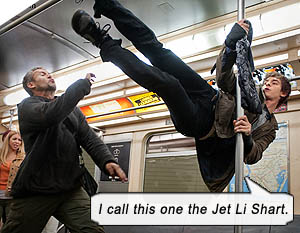 I find the scene of Parker over Uncle Ben’s dying body a little disingenuous, as Parker yells, “Somebody call an ambulance!” We’ve grown used to this scene in movies – a dramatic high point. But – waitaminute! – they’ve set their movie in the modern world where everyone is communicating quite nonchalantly on cell phones; and Peter, weren’t you just messing with your cell phone not two minutes ago? Why don’t YOU call an ambulance?!

The two best scenes in the film are when Spider-Man builds an actual spider-like web in a junction of sewers, and reclines in the middle, waiting for his prey to send a telltale shockwave through one of the strands; and his first “save” of a life.

Up to that point, Parker had never considered he was anything more than a genetically-enhanced teen in a mask hunting his uncle’s killer; never considering himself the flamboyant name the public were tentatively calling him. When he saves a little boy on a bridge (whose father is B-Movie megastar, C. Thomas Howell), the father asks, “Who are you?” Parker replies, hesitantly, yet we see even through the mask an acceptance of identity, an answer to one of the film’s questions ‘Who am I?.’

It’s the most tearjerking Grand Moment in the movie. Though the filmmakers make him take off his mask just a little too much (as usual, for the emotions on his face to be seen), this moment with the mask ON is the most powerful, where he owns up to his identity, purpose and responsibility, in one fell swoop realizing his powers could be put to more use than just punching small-time bad guys.

Superhero movies became a vehicle for A-List actors ever since Brando’s Jor-El mumbled his way through SUPERMAN (1978), but now they are no longer playthings in which great actors seek refuge from “serious” roles, not least because of the massive economic cog they have become; superhero movies are now as much a showcase for great actors to show off their acting chops, as any movie featuring cripples or retards (cough–Oscar roles): consider Ben Kingsley in IRON MAN 3, Michael Caine in THE DARK KNIGHT RISES or Kevin Costner in MAN OF STEEL. And with the gamut of nuanced emotions he runs in this latest “realistic” superhero movie, I would gladly admit Garfield to that pantheon of choppers. And let’s not forget – Sally Field!