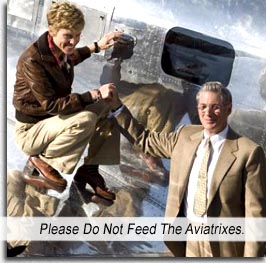 Hilary Swank is Amelia Earhart, a true America’s Sweetheart for her aviation feats in the late 1920s, who attempted to circumnavigate the globe by plane in 1932 and almost made it, disappearing on the penultimate leg of her journey. AMELIA is not so much a biopic as a clinical coverage of her years piloting aircraft in record-breaking flights; record-breaking for a woman, that is, on the heels of legendary Charles Lindbergh.

Richard Gere is Amelia’s grounded hubby and manager, George Putnam, stewing over her safety and whether she’s trainspotting with Ewan McGregor whenever he (Putnam) is busy securing funds to get her next flight off the ground.

Movie flits hither and thither, showing off her fame and other commitments, from newsreels, newspaper headlines, great flights and endorsements, TV ads and waffle commercials. What started as fun for Amelia became a duty when she had to whore herself out as an endorsement, in order to raise money for her flights, which became more daring and dangerous.

I’m sure Earhart’s life was skyscrapers more interesting than this movie made it; for a rugged indie adventurer like herself, her suitors must have been many, far and wide, rather than the few sedate adultery proposals she gets from young Gore “Gene” Vidal (Ewan McGregor – which she accepts) and her navigator (which she rejects – it’s all about status, innit?). Big advocate for the Women’s Movement, Earhart kept her own name after marriage, also advocating a kind of “open marriage” in a time when women were barefoot nekkid in the kitchen with three kids suckling at the teat. (Swank seems to relish these roles where she gets to strap down her boobies.)

Final segment of movie is the most interesting, as Amelia tries to find Howland Island, a tiny two-mile jot in the Pacific – her last shot at refueling before the final leg of her world-spanning flight. Radio communication is intermittent and eventually lost. On July 2, 1937, Amelia and her navigator, Fred Noonan, vanished over the Pacific Ocean.

Everywhere you read about Amelia Earhart, they write that her disappearace is a “mystery.” What mystery? I’m gonna take a wild stab in the dark and say they ran out of fuel and ditched in the ocean.