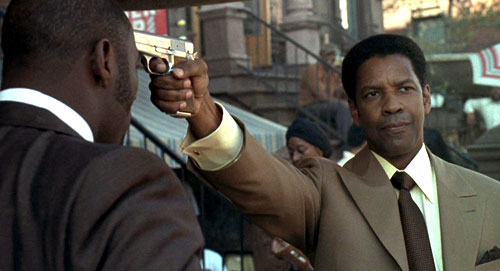 Or so it seems at the conclusion of AMERICAN GANGSTER, when a career gangster and a struggling cop are laffing it up in a montage, collaborating to bring down the gangster’s empire. Now why would they be doing that? I’ll get to that subtle mismanaged message in a moment.

Hmm, a movie called AMERICAN GANGSTER that’s NOT about George W. Bush or Dick Cheney? Maybe Karl Rove? Or Alberto Gonzales? No, GANGSTER is about someone just as immoral and unwholesome as that cast of fruits, but who is portrayed as exactly the opposite, exactly like that cast of fruits portray themselves.

Denzel Washington plies his smoothie-smooth smoothness as Original Gangster, Frank Lucas, simultaneously elevating the movie and ruining it. You see, the real Frank Lucas in 1968 Harlem was a devil of the streets, an iron-balled, malevolent drug boss, who ran the ghettos and ‘burbs like a chinchilla-coated, pimp-fisted Hitler. Casting Denzel was less about conveying the horrifying aspect of a sociopath crime lord than it was about presenting a man-toy whom women want to DO as much as men want to BE; his velvety charm, less about repulsing people than coercing them through box office turnstiles.

Russell Crowe is Lucas’s nemesis, the dogged, disheveled detective, Richie Roberts, as unsophisticated and unorganized as Lucas is classy and controlled. Roberts alienated his police pals by turning in a million dollars drug cash he found on the streets, instead of swanking it amongst himself and friends. (Which puts paid to the notion that the good guys are unequivocally Good Guys. Coincidentally, in FALLEN, Denzel played a cop who “didn’t take green.”) Everyone is painted as morally swingshift, only looking out for themselves, even Roberts to a lesser degree.

Though he is determined to smoke out Lucas, Roberts cannot get his own house in order, as he studies for bar exams while his Movie-Convention Nagging Ex-Wife (Carla Gugino) never has a decent thing to say about his child visitations or his three-day-growth existence.

Then there’s Barbra’s stepson, Josh Brolin, struttin’ leather-coated and coolly cruel through Harlem’s underbelly like a kingpin himself, until it is revealed he is a dirty cop playing both sides of the street. 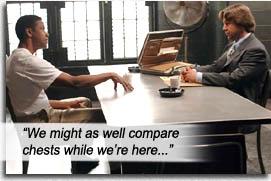 Lucas inherits legendary Bumpy Johnson’s street empire when Bumpy dies in his arms. Rather than allow the neighborhood heroin to wind its way through innumerable middle men (including the old-school Eye-talians), Lucas goes straight to their Bangkok source and sets up a direct line of purchase, smuggling the smack into the U.S. in the caskets of dead G.I.’s returning from Viet Nam. They called it the “Cadaver Connection.”

His sizzling-pure product (called Blue Magic) becomes renowned for being twice as good for half the price. Even Roberts’s cop partner succumbs to the taste. There are cameos by veterans Armand Assante, Joe Morton and Cuba Gooding Jr. (as a preeningly vicious street competitor).

While Roberts and his ragtag team of do-gooders try to sniff out who is flooding the streets with H so good that veteran junkies are dying from its potency, Lucas is busy buying a mansion for his mama and setting up his many brothers in positions of power on the streets, a familial tactic employed by those old-school Eye-talians. (From an interview with New York Magazine) Lucas explains why blood is best: “A country boy, you can give him any amount of money. His wife and kids might be hungry, and he’ll never touch your stuff until he checks with you. City boys ain’t like that. A city boy will take your last dime, look you in the face, and swear he ain’t got it – the sonofabitch is just no good.”

Which brings us to something which this movie lacks: iconic moments. AMERICAN GANGSTER might be taking its cues from THE GODFATHER, and may be aiming for characterization rather than shoot-em-up action, but there are few magic moments that burn themselves into your brain.

Ridley Scott directs excellently, but his writer (Steven Zaillian, from an article by Mark Jacobson) gives him no moments like Brando’s opening monologue, or Michael proclaiming, “It’s just business, Sonny”; or Luca Brasi’s tongue-tied meeting with the Godfather; Michael retrieving the gun from the bathroom to shoot the police chief; Sonny Corleone’s assassination; “sleeping with the fishes,” “for old times sake, Michael?” “an offer he can’t refuse”…

When Lucas ironically proclaims “This is America!” it is as far removed from Amerigo Bonasera’s sincere proclamation of “I love America” as Denzel is from Brando.

Even when Denzel is quoting some of Lucas’s own priceless thuggery, he is just too Sexy-Smooth to pull off a chilling take. We are never “horrified” by this monster of a man – the first scene features him expressionlessly shooting a man dead who is already on fire. But it’s Denzel: he’s “cool,” not “cruel.” The real Lucas once set up an initiation for himself and the reality is disturbing: he gave one of the baddest neighborhood thugs $5000 in dope and then harassed him for payment publicly, with the unswerving intent to shoot the guy as a lesson for the neighborhood. I’ll let Lucas tell it:

I gave him $5,000 worth of merchandise. Because I know he was gonna fuck up. That’s the kind of guy he was. Two weeks later, I go talk to him. I say, ‘Hey, man, when you gonna pay me?’ Then, like I knew he would, he started getting hot, going into one of his gorilla acts. He was one of them silverback gorillas, you know…  He started cursing, saying he was going to make me his bitch and he’d do the same to my mama too. Well, as of now, he’s dead. No question, a dead man. But I let him talk. A dead man got a right to say what he wants. Now the whole block is there, to see if I’m going to pussy out. He was still yelling. So I said to him, ‘When you get through, let me know.’ Then the motherfucker broke for me. But he was too late. I shot him. Four times, right through here: bam, bam, bam, bam.
— Frank Lucas. 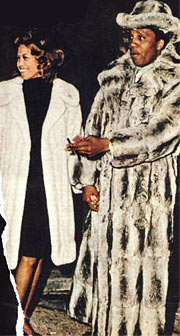 Denzel turns this scene into one of the film’s few iconic moments… but hey, it’s still sexy, smokin’ Denzel. I can see a million ghetto kids with automatic weapons trying to emulate this scenario…and there’s blood on the streets – usually the kids’ blood. Which allows me another segue… to the cause of Crime (and it ain’t movies).

As much as the film-makers and viewers of this movie would like to think this is a movie about crime, it is actually about the BY-PRODUCTS of crime. True Crime issues from the highest echelons of society, not the lowest. It is how the highest echelons treat the lowest that either creates or stultifies crime. The hooded desperado stealing $75 from the grocery store is NOTHING compared to the congressperson who banks hundreds of thousands by neglecting to properly disburse funds allocated to his region. Not only does the congressperson ROB the populace of actual money, the social problems that arise from his misspent funds are directly related to the hooded desperado needing that $75 any way anyhow.

THE GODFATHER PART II (1974) presented it beautifully in recreating Little Italy. The crush of overpopulation forced the lower classes to fend for themselves. The extra-legal system created by the mafia was coerced into existence because a major percentage of the population was economically forced out of the middle class earning system. Crime syndicates don’t exist in a vacuum – they emerge from the social strata created by the negligence of their own ruling classes.

This brings us to the paradoxical message in AMERICAN GANGSTER. Obviously, the MPAA forces scriptwriters to bring gangsters to justice – and ultimately, Lucas is caught. But the overarching message this movie sends is that life’s gonna suck anyway at some point (just look at Roberts’s sorry life, even being on the “right” side of the law). So while you’ve got a grip on Life – squeeze! For all it’s worth. You may stay on top, but if it all falls through, you would have still lived a better life than the average bear. For didn’t Lucas live miles above Roberts throughout his life? Money and cars and mansions and a Puerto Rican model for a wife.

At the end, the Robin Hood of Harlem was reportedly worth more than $150 million. And then when he did get caught, he sang like a canary, gave up his backstreet boys and was sentenced to 70 years, out in five. I think that five years of confinement is worth 20 years of mansion living. How ‘bout you? Denzel and Crowe play the final laughing scenes like a coupla buddies over beer and pizza. Why not? Lucas cut a deal finer than his Blue Magic. In real life, Roberts even became Lucas’s defense attorney in the 1990s. (So much for delineating Good Guys and Bad… as always, morally swingshift…)