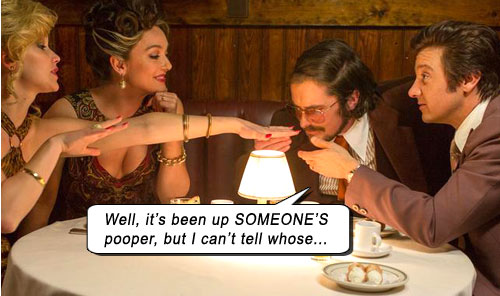 Set The Controls For The Heart Of The Scum.

This is American politics. Hell, this is world politics. So are the makers of AMERICAN HUSTLE trying to shock us, mock us, or are they just having a laugh when they open with the title card, “Some of this actually happened”? When? During Nixon’s Checkers scandal? During Reagan’s Iran-Contra? During W’s Savings and Loan? During Jack Abramoff? During Bob “Ultrasound” McDonnell? During Chris Christie’s Bridgegate? Last Tuesday? Constantly?

Director David O. Russell’s AMERICAN HUSTLE doesn’t tell us anything we don’t know, yet is a superbly-crafted, entertaining True Crime exposé based on the FBI sting operation from the Swingin’ ’70s called Abscam, where they used fake sheikhs to entrap politicians with promises of millions to invest in their cities. (I hate to belabor a point, but “based on” means, as always, that facts have been replaced by utter bullshit; HUSTLE is not a documentary about Abscam, it’s entertainment, shot through with humor, turning all its despicable real life-inspired characters into pseudo-comedians. If we knew these people, would we want ANY of them near us? Con artists, FBI dicks, fishwives, corrupt pols, mobsters…) 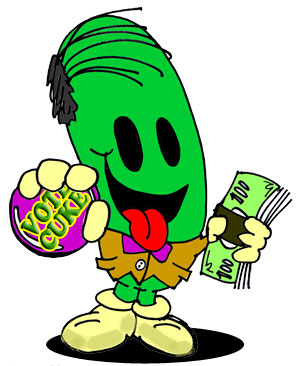 Christian Bale is con artist Irving Rosenfeld. As usual, his Method performance is enormous. This time, literally, gaining RAGING BULL poundage to play the dormant volcano with the raging comb-over. It’s a powerful physical statement (that noticeably lends subtleties to his performance, in movement and demeanor). But one wonders: with the excellent prosthetic technology these days, does an actor really need to ruin his body to play a ruined body?

Amy Adams, camera lovingly caressing her shapely hourglass, plays Irving’s partner-in-love-and-crime, Sydney Prosser. They meet at a bikini party where he falls in love with her hourglass and she falls in love with his, uh, confidence. A long montage depicts Irving and Sydney’s courtship poignantly – we actually feel their love-ache. And when she puts on that fake English accent as “Edith” from London, our ache just gets moister.

Seeing Life through the prism of a Long Con, Irving admits to conning himself into not facing his realities: he’s already married – to dissatisfied, loudmouth fishwife Rosalyn (Jennifer Lawrence, who has never been more annoying). He laments that Rosalyn, with her petulant coyness and contrived helplessness, is conning him into staying with her. She would continually get him into hot water, propose a half-baked solution, and then act as if she has done him a favor, capping her shriking with, “You’re welcome!”

Bradley Cooper, all whiteboy Jheri curls and disco beard, is FBI man Richie DiMaso, whose schemes to bust politicians leads to much more dangerous people – the Mob. By the time he and Irving are having a sitdown with Meyer Lansky’s right hand man (an uncredited Robert De Niro, who brooks no shit), they can see they’ve gone too far but cannot turn back.

Superb stunt casting with comedian Louis C.K. as Richie’s boss, who starts telling Richie an ice-fishing story, presumably to illustrate some life lesson. Though we hear more of the story as the film progresses, we never hear the ending or the lesson of it. Like life, never seeming to have purpose or direction, and you never know when it’s going to end or make sense. Louis is still the put-upon doughy guy, but it’s a delight to see him in an actual role, rather than just complaining about stuff. Nice to see Alessandro Nivola in a small, biting role as the D.A. I always imagined the steamy-blond, muscled Nivola would go onto greater successes since I saw him in BEST LAID PLANS (1999); guess his agent just didn’t have the clout to make him the next Brad Pitt.

Jeremy Renner, hair higher than Travolta’s in SATURDAY NIGHT FEVER, is Carmine Polito, Mayor of Camden, New Jersey, who is painted as an honorable man, although I can’t see why. Firstly, he’s a mayor in New Jersey – any wonder he’s corrupt? (cough-Chris Christie!); and secondly, not only does he fall for the fake sheikh entrapment, he leads Irving and DiMaso into Mob dealings of his own volition, not through FBI coercion.

Michael Pena plays a fake sheikh – yes, the casting is as stupid as the idea and the people who buy into it – and Beansie from THE SOPRANOS (Paul Herman) is a mob lawyer!

A hilarious side-story makes us ponder the nature of politics: Carmine gifts Irving with a new-fangled invention called a microwave oven – which he calls a “science oven.” (He warns Irving not to put metal in it, which Rosalyn immediately does, sets it on fire, and then implies Irving should thank her for discovering how dangerous the science oven was. “You’re welcome!”) For helping him get funding for his city, Carmine tells Irving, “I’m giving you a gift, from a friend.” It’s not graft, not bribery, not corrupt. Carmine is sincere about a gift just being a gift. And when that gift is reciprocated – in either money, drugs, women, access to power – who’s to say it’s not a gift back? It might be called nepotism, favoritism, extortion, but this is how the world works: you scratch my back, I’ll scratch yours. Quid pro quo, Agent Starling. And those people they used to call con men? Now they’re called lobbyists.

Soundtrack works headily to place us in the moment, a brash sampling of 60’s and 70’s rock and disco gems: Don’t Leave Me This Way, Live and Let Die, Jean Genie, Delilah, How Can You Mend A Broken Heart, including rare ELO – Long Black Road (2001) and 10538 Overture (1971). I spilled my jellybeans in delighted surprise at this last track, the thick-as-syrup first song on Side 1 of the first Electric Light Orchestra album! Also: Duke Ellington, Cole Porter, Thelonius Monk, and demi-god Todd Rundgren! And – wait for it – actual soundtrack is composed by dark prince Danny Elfman! What a musical coup this movie is! There are enigmatic camera moves accompanying strange juxtapositions between source music and visuals – been watching GOODFELLAS much, David O. Russell?

Sad to say the movie’s last three minutes ruin EVERYTHING that was driving AMERICAN HUSTLE towards being the perfect piece about hubris and absolute power.  Writers Russell and Eric Warren Singer homogenize the “bad guys”! The last scenes of Irving and Sydney show them as legit art dealers… because the Gutless MPAA will not allow “criminals” to ride out the end of a movie without being jailed, killed, avenged or redeemed. Whether this happened in real life is moot – the dramatic arc of the movie is forced into this jejune trope; Russell could have ended his movie at any point in time he wished, but he chose – or was forced – to make the anti-heroes turn from crime and join the dreary masses.

A worse sin is perpetrated on Bradley Cooper’s FBI agent – no, not that garish disco costume (but he makes it sweat, with hips that remind us of Tom Jones at his salacious best) – he is conned into being the “loser.” He was the ostensible “good guy” so to make his losing palatable to braindead American audiences, there is a whole subplot about him cheating on his fiancé, nearly backdooring Sydney in a women’s dunny. So lemme get this straight: FBI guy sincerely trying to curb political corruption is clotheslined into submission because… sex in a toilet?! Shameful, transparent, lazy screenwriting combined with Gutless MPAA redemption edicts.

Makes me long for the bravery of European movies like TRAINSPOTTING, LOCK STOCK AND TWO SMOKING BARRELS, MATCH POINT, et al. Bad guys win – and continue to be the bad guys we’ve grown to love through the movie. Successful films to boot. And there are no more or less reprobates in society turning to drugs, thugs or murder than there would have been, with or without those other even more dangerous influences on ur-culture, the violent King James Bible or reprehensible Disney children’s movies.

The real criminals here, ladies and gentlemen – are the Gutless MPAA! But there’s more stupidity: with their prosaic rewriting of these characters, the MPAA unintentionally promote the concept that Crime Does Pay. The same thing happened in AMERICAN GANGSTER and CATCH ME IF YOU CAN. If perps would just roll over on their fellow crims, the authorities will let you go free!  Which is totally opposite to the message they’re trying to convey: that crime is bad in the first place. Idiots!

If we’re going to invest our time in unsavory characters, then, like THE GODFATHER, take those anti-heroes to their logical ends – don’t suddenly give them new personalities and pretend they’re as boring as the rest of the humanity we’re trying to escape by visiting this movie! David O. Russell just pulled a rope-a-dope on us! AMERICAN HUSTLE itself is just a con!

Uncredited = Hissyfit.
“Uncredited” used to signify a surprise appearance or a small cameo role – but it’s a more venal meaning nowadays: a big-name star is billed as “uncredited” when they (read as their agent) cannot get the billing they desire, or if their lower billing will skew their star status.

In HUSTLE’s example, De Niro was up against not only many obviously larger roles, but four stars from recent major movies (Bale and Adams arrive from THE FIGHTER 2010, and Cooper and Lawrence were just cooing at each other in SILVER LININGS PLAYBOOK 2012). If the filmmakers had billed him after the first four actors, it would have looked bad for a veteran like DeNiro, who is still pretty active with a solid toughguy rep, so his agent must have suggested “uncredited.”

It’s stupid, childish, petulant, and one day, I hope to have the same problem.

The Real Characters Behind the Movie