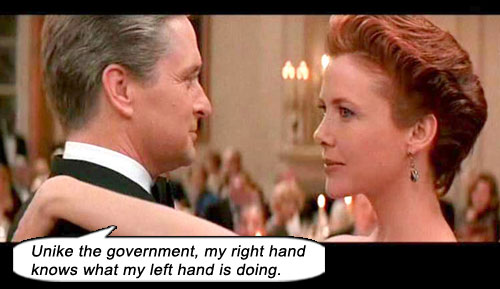 A Romantic State of Union.

“Romantic comedies” have long been relegated to the demeaning stable of Chick Flicks because their sophomoric bent allows them no breadth of intelligence or forays into behavior with balls – pussies browbeat men into behaving like pussies, whilst pulp novella situations play out in a world inhabited by pussified male models and Jennifer Lopez.

Director Rob Reiner‘s THE AMERICAN PRESIDENT is exactly the opposite; not only is the male protagonist anything but a pussy, or unlikely to be pushed into being one, the movie is intelligent and charming, yet masculine enough for men to appreciate, with astute writing and full-bodied characters, and takes into account the fact that some viewers can apprehend more than just boomboxes outside bedroom windows or fart jokes.

Michael Douglas is The American President, Andrew Shepherd, a widower with his second term election looming. Annette Bening is lobbyist Sydney Ellen Wade, whom he falls for. The obstacle between the smitten lovers is nothing short of the aura of the Presidency itself, and writer Aaron Sorkin (A FEW GOOD MEN) brings a depth of humanity and humor to this situation that is sorely lacking in American love stories. 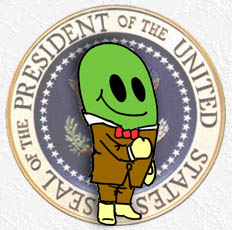 …in the land of the Kree
And the home of the braves.

When President Shepherd orders an attack on a foreign country, his concern is for the civilians with families who will be working the foreign embassy when it gets bombed; it is a heart-wrenching decision for him – as opposed to the real life President G.W. Bush’s flippancy when asked whether he suffered any pangs of conscience after greenlighting the Iraq war, “I made the decision. I sleep well at night.” To the real life President, “only one thing matters – winning.”

Sociological disparities like this litter the film: we realize that opposing party leader, Bob Rumson’s (Richard Dreyfuss) smearing of the President’s love life and his half-baked jabs at Shepherd’s “flag-burning, hippie girlfriend” were reined in by the film-makers, after being aware of the real-life President stooping to outright lies to blacken his opposition (Bush versus Kerry, 2004).

And though it is obvious much White House protocol was passed over with a wave of the Hollywood wand, the movie is so well-made these deficiencies seem like trivialities.

Supporting players are suitably brilliant: Martin Sheen (as Shepherd’s Chief of Staff and confidante), Michael J. Fox (reprising his role as some kind of Alex Keaton within the President’s cabinet), David Paymer (the role of pollster couldn’t be more suited to a character actor so jumpy and uncomfortable), and John Mahoney (the character actor with his picture next to “father figure” in the dictionary).

The intelligent dialogue snaps and crackles like an electrified fence with a small animal thrown against it:

In a debate in the Oval Office, Sheen chastises Fox for questioning the president’s decisions, “The president doesn’t answer to you–”
“Oh yes, he does! Because I’m a citizen. And this is my president!… ‘Cause in this country, it is not only permissible to question our leaders, it is our responsibility!”

Brings a tear to the eye that people could be this cognizant and lucid. Pity none of them are in government.

THE AMERICAN PRESIDENT never loses its focus on the love story, the element which actually holds our attention – rather than make us wince – due to being played out by intelligent adults, instead of 16-to-20 year-olds making all their decisions under the influence of hormones and beer, or pussified male models and Jennifer Lopez. Witnessing the chemistry between Shepherd and Wade, we can’t help but speculate that if the real-life Presidency could experience one-tenth of this heady hallucinogen with a woman one-hundredth as vivacious and witty as Annette Bening, there would be a million times less political turmoil in the world.

As it is phrased outside Presidential circles: “Dude, you need to get laid more often.”