About a yuppie serial killer who finds he is slowly going insane, not from killing people, but from the boredom of doing so. This comedy is not just black – it’s black with sprinkles on top and a human head on a spike. 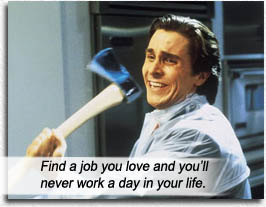 From the hilariously disturbing Bret Easton Ellis novel of the same name (screenstoried by Mary Harron and Guinevere Turner, directed by Harron), AMERICAN PSYCHO defines a new angle on the internal world of serial killers.Our anti-hero is Patrick Bateman (Christian Bale, ripped like a suspension bridge cable), a vice president of his company, a 1980’s uber-executive, whom we never see do any actual office work, narrating his obsessive-compulsive behaviors; petulant, trivial, rich, ensconced in yuppie consumerism; in a loveless, close-to-tears-of-exasperation relationship with his empty-skulled girlfriend (Reese Witherspoon), who is oblivious to his ambivalence and neuroses. He’s also a serial killer.

Bateman’s life is an endless succession of vapidity – exec friends who speak and never listen, women who speak only as prelude to fucking, fake parties, fake emotions, plastic girlfriends, all status and wardrobe and petty gossip. Every time he needs to exit an unsavory social situation, his excuse “I have to return some videotapes” is taken without question because no one is listening; when he is loading a bodybag into the back of a taxi, a fellow exec catches him, only to marvel at the excellent “overnight bag”… It is no surprise that Bateman’s only grasp on “reality” is the solid hack of his axe on someone’s skull.

When Bateman narrates an album review or describes pedantic rituals, his voice takes on the clinical detachment of an outside observer. And in that persona, his murders take place – observing himself as he is committing them. We feel the incongruous juxtaposition of personalities as he puts on a Whitney Houston CD and starts proselytizing on the philosophies of The Greatest Love of All as a prelude to killing two girls. And the black humor shines when he tells his secretary (Chloë Sevigny) during a date, “You’d better go or I might hurt you,” she thinking that he refers to the discomfort of office relationships, while he means it literally. (There is also an unintentionally funny moment when one of Bateman’s intended victims makes a homosexual advance; Bateman is so repulsed he immediately washes his GLOVED hands.)

Surprisingly, the two female film-makers retain verbatim Ellis’ misogynistic Truth about women with “good personalities,” voiced at a Boys Sitdown by Josh Lucas: “There are no girls with great personalities. A good personality consists of a chick with a little hardbody, who’ll satisfy all sexual demands without being too slutty about things and who will essentially keep her goddam mouth shut. The only girls with good personalities who are smart, or maybe funny, or halfway intelligent or talented – but God knows what the fuck that means – are ugly chicks. And this is because they have to make up for how fucking unattractive they are.  If they’ve got a good personality and not a good body, who the fuck fucking cares?”

With all the CSIs and LAW AND ORDERs abounding on our inculcating airwaves, one gets the impression that most murders are eventually solved. But AMERICAN PSYCHO leaves us with the reality that there must be thousands of unsolved murders perpetrated by people like Bateman – murders that we will never hear of because they are so graphic; that would never air on COPS for fear of making the steroid bull-stars of that show look as impotent as we know they are. Though a detective (Willem Dafoe) passively questions Bateman on suspected missing persons (that he has eighty-sixed), the reality is that if someone in Bateman’s VP position were a serial killer, the kid gloves would stay on; were he indicted, the charges would be harder to stick; were he convicted, his sentence would be commuted. This is how a money-based society treats its moneyed criminals. (Even the term “white-collar” connotes a more “acceptable” crime.)

We are made privy to the prosaic details of being a serial killer when Bateman kills Paul Allen (Jared Leto): putting newspapers down to sop up the carnage after the chopping spree, meticulously cleaning fingerprints, packing a suitcase for the victim to make it look like he has gone on a trip, changing the message on the victim’s answering machine; body bags, skulking skills, alibis, lying to the police convincingly… it’s quite a task, and we almost admire Bateman for the organization and creativity required in the serial killer job description. But then, maybe it’s that same skill set that all vice presidents possess. It’s a well known fact that in order to attain an executive corner office, you’ve got to be pretty morally bankrupt.

With its plastic, pastel-tie soundtrack (featuring Phil Collins, Huey Lewis, Robert Palmer, et al), AMERICAN PSYCHO captures the era when cellphones were the size of cereal boxes, also conveying the ultra-upper-class hedonism and juvenility of these spoiled-riche business-boys (Bateman is vexed when a colleague’s eggshell-colored business card is better than his; simply devastated when another colleague’s card has a watermark); and reminds us of the blasé sexism once accepted in the office (“Don’t wear that outfit again – and wear high heels”) – but the movie never quite captures the disturbing horror or unbridled carnage of the Ellis novel.

Two reasons: Firstly, the book is the most violent story you will ever puke your guts out over – I especially remember the scene where Bateman grinds a circle saw into a woman’s face and marvels at her teeth splattering outwards – and there’s only so much disturbing gore the gutless, hypocritical MPAA will allow onto the screen at one sitting; secondly, the movie has been screenstoried and directed by women. Yes, it’s a sexist comment – directly criticizing the fact that the female sex is trying to convey the male sex’s point of view. And that can’t be done – not by the most intelligent woman, not by transgenders, not even by Richard Simmons. Women cannot possibly fathom the sexual intent of even normal red-blooded men, so how would they provide any insight or “realism” into the perverse sexual depravity of a male serial killer?

The most perversity this movie can muster is showing a naked Bateman, covered in blood, chasing a hooker through his apartment complex with a roaring chainsaw… and we’ve all done that before…