George Clooney is THE AMERICAN. Everyone else is Euro, buttery accents and dynamite sexy. 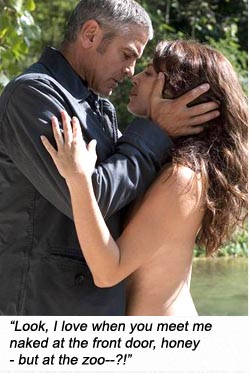 Clooney is Jack, a hitman sent to Italy by his boss Pavel (Johan Leysen) to design a high-powered rifle for a client. While Euro-ing out amongst the cobbled streets and breezy cafés, Jack falls for prostitute Clara (Violante Placido, the most naturally beautiful woman ever created by the union of sperm and ovum), and decides to give up the illicit killing biz to start a new life with her. But his boss won’t let him go that easily.

It’s the usual story of wanting out and being pulled back in. Coupled with the usual story of boy-falls-for-girl who changes his life. But as director Jason Reitman did with UP IN THE AIR (coincidentally, another Clooney film), director Anton Corbijn presents a very mature, plausible story of redemptive love and paranoid betrayal.

The emptiness in Jack’s solitary life of weapons-building, sleeping alone and dining in silence is well-portrayed, so we do not begrudge him the wonderful life he might envision with the vivacious Clara. Unfortunately, as soon as Jack finds something to live for, the harder it is to stay alive.

THE AMERICAN is shot through with quiet tension, controlled vignettes of assassination attempts through the claustrophobic avenues and twilit gardens of Italy; poignant characters with aching backstories desperate for redemption.

When he meets with the severe blond assassin client (Thekla Reuten), Jack stays her hand on a butterfly, “Don’t touch it – it’s endangered.” She takes to calling him Mr. Butterfly. Later we see a butterfly tatt at the top of his spine. And Clara the prostitute calls him Mr. Farfalla (Butterfly) so cutely, with such a look of devotion accompanying that perfect hourglass nakedness, your love-butter will melt in your hand, not in your mouth.

Clooney pulls out his reserved cool for this smart European production, once again helping to heal the image of the ugly American.