Re-educating the slaves of perception. 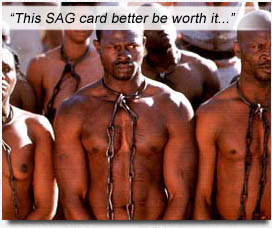 AMISTAD, one of the modern hammers to beat Whitey upside the head for his past, present and future racism. No metaphors, no allegories, no analogies – this is straight up, in-ya-face, naked mea culpa racism for all the world to be ashamed of.

Director Steven Spielberg‘s powerful, insightful AMISTAD suffers from the usual problem associated with “Based On A True Story” movies – it simplifies Story until it is nowhere near the True it is supposedly Based On.

There are many more complications in the actual True Story, but IN THE MOVIE: African slaves overrun their Cuban slave ship, La Amistad, and sail it off course in their attempt to get home. Captured by a United States naval ship, they are taken to an American port and treated like property until politicians and courts figure out their backstory.

It is 1839 and the days of slavery are numbered – as we see many “free-men” (blacks in positions of relative respect). So with none of the Amistad Africans able to speak a word in their defense, the legal fine print demanded the courts discern whether they were descendants of slaves (which would make them guilty of murder onboard Amistad) or kidnapped from Africa (which would justify their attempted escape). Yet they were held in prison – even though they technically stood outside the American legal system.

It takes ex-president John Qunicy Adams to turn the provincial perceptions of American white folks to understanding that no matter their technical definition, in another land, these black folks were a free sovereign people; their detainment was not only moot, it was reprehensible.

Djimon Hounsou is lead slave, Cinque, in the mandingo performance that shot him to international recognition. Matthew McConaughey is Baldwin, a young lawyer who initially treats Cinque’s people as property (which is the right thing to do to win their case, in a blinkered court that cannot see them any other way), but he must relinquish the case to bigger guns. We would think this might be Morgan Freeman as Joadson (an African-American, heh, “free-man”), but Freeman, usually a font of conscience, gravitas and bravura (or at the least, gritty voiceover) seems to do nothing in this movie except wander around in his big Batman coat. He cedes all his usual duties to Anthony Hopkins as John Quincy Adams, who steals every scene (he is, after all, Anthony Hopkins!) and gives the final rousing, epic speech that Morgan Freeman just wished he could’ve done as a gritty voiceover.

When Adams delves into the minds of the Africans, in particular, Cinque’s conquering of a lion terrorizing his village, the audience and cast alike start to realize the fabric and depth of the people they have been holding; simultaneously driving home how dishonorable white law actually is. Cinque cannot disguise his ferocity towards the duplicity of white legalities; he screams in his Mende language, spittle flying, fiery backdrop glazing his naked ebony: “What kind of a place is this where you almost mean what you say? Where laws almost work? How can you live like that?!” (Philosophy for the men, naked ebony for the laydayz…)

In a flashback, we are shown how these kidnapped people were treated onboard La Amistad – shackled in the hold of the ship, naked, fed gruel, adults trying to hold babies above the crush of bodies; when food runs low, twenty men and women shackled together are simply thrown overboard. It is horrifying.

The visuals in AMISTAD are disturbing, the psychology even more so. The irritating orchestra-swell happy ending does not signify only this winning case, it heralds a sea-change in the perception of those people who actually sat on the bench and owned slaves. The morality of denying a fellow human their rights was being realized. Anthony Hopkins makes the conscience bleed (while Morgan Freeman stews).

And the triumph of AMISTAD is not that it portrays the horrors of slavery – a million movies do that – it liberates the modern audience from viewing slaves as one-dimensional peons. It does for our minds what Cinque shouts for his people in court: his shred of repeated English, an anguished, feral cry that shivers our souls: