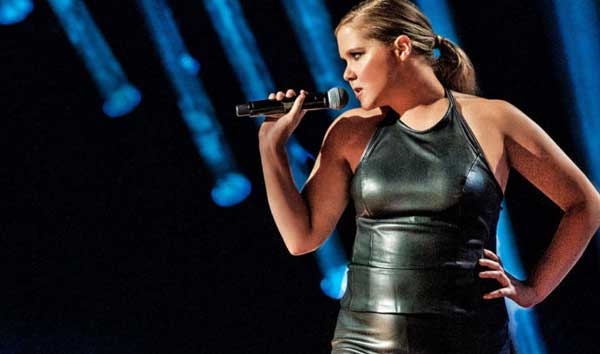 When self-flagellation is anything but funny.

First of all – bad decision. When you can see that bellybutton indent, it’s over. It’s Amy Schumer in a standup show called THE LEATHER SPECIAL. And she’s bedecked in tight leather from top to toe. And it’s not special. One of her first lines is, “Already regret it.” Us too, Amy.

It’s one thing to laugh at yourself or be self-deprecating; it’s another thing entirely to force an unsavory physical aspect of yourself onto an unsuspecting public and then to call those who are repulsed by your physical attributes morally reprehensible. Like, “Look at my mole – my MOOOOLE – look at it! Yeees! Touch it with your tongue! Why are you running away? You must be an intolerant racist!”

There’s only so far political correctness can stretch. And I do mean stretch.

Amy knows this. That’s why her first rash of gags are about fat. Her fat. She tells of posting a picture of herself in “just underwear,” then chastises the men when only the ladies applaud her decision. What did you expect, fat chick? Then she laments over the press description of that photo as “brave,” rather than any other sex-oriented descriptor. Again, you know better than to be surprised, fat chick. Because much of Amy’s comedy is predicated on her being plain amidst a society paying obeisance to skinny models. She highlights how tight the leather is by imagining it “crumpled on someone’s floor” and the terrifying prospect of having to squeeeeze back into it in the morning…

Now I’m not an Amy-hater. I’m actually an Amy LOVER. Her standup is brave (not in that way, in the politically incorrect way), her sketch comedy show INSIDE AMY SCHUMER is a socially observant hammer (even though many comedians accuse her of “gag-stealing”) and her recent movie TRAINWRECK (which she wrote, starred in and co-produced) proved she has the capacity to be a major Hollywood player… I’m just not a fan of where she is now with this LEATHER SPECIAL, her first Netflix feature. She writes, directs and stars, so kudos for being a triple threat, Amy, but content should count for something, no?

Amy immediately segues to slut jokes, because, of course, if she’s going to dress this way even though her body is screaming hell no, she must just love dick. Dick dick dick. And getting drunk. Blackout blackout blackout. And then talk of how big her pussy is and how much it smells —

And before you know it, I’m watching HOUSE OF CARDS.

Back when Amy Schumer was younger and (relatively) slimmer, she was sexy as hell. Because she had a more coy/sensual approach to her weight and promiscuity. She seemed to authentically enjoy being a sexual person, and was matter-of-fact about being overweight; it was refreshing and natural. And dirty and funny. Now, with all the prurient talk of cumming on tits, vomit and diarrhea, birth control and butt sex, she reminds us of one of those truck stop whores who just splays across the bed with her garish, unshaven thighs open, her mascara running, and cheap scotch dribbling from betwixt her lips – both sets of lips.