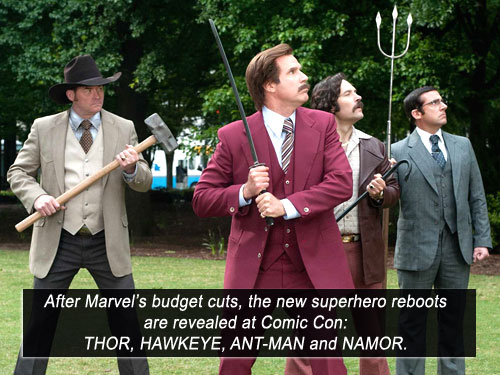 The Corporatization of Dumbification.

There are a few above-average jokes in ANCHORMAN 2: THE LEGEND CONTINUES, but most of them are quite average.

Underpinning the plot of a TV news anchorman struggling to find meaning in his job and love life, there is the cheeky indictment of the vapid 24-hour news culture and, by association, indictment of all those responsible for perpetuating it – you dummies. This saves the movie from being a crumpled, directionless ad-libathon.

Once again set in the Swingin’ ’70s, Ron Burgundy (Will Ferrell) leaves his wife Veronica Corningstone (Christina Applegate) when the network chief (a grizzled, deadpan Harrison Ford) promotes her as the first female anchorwoman and fires him. A New York network producer (Dylan Baker) recruits Burgundy for a new concept – a 24-hour news channel. Burgundy: “That is the dumbest thing I’ve ever heard – news going round the clock?!” Called GNN (The Global News Network) and funded by an Australian entrepreneur (Josh Lawson), “We own the news – we can say what we want!” (cough-Rupert Murdoch), it’s starting to look dangerously close to FOX marrying CNN.

Not only does Ron’s team have to conquer the resident super-pretty, super-smarmy anchormantastic Jack Lime (James Marsden), Ron also discovers his wife has started dating a psychiatrist, Gary (Greg Kinnear as the pony-tailed 80s lover, with sweater tied evocatively around neck). To regain his pole position as top anchorman and regain his wife in pole position, Ron tries anything to make his news sexy and score ratings…

Strangely enough, just by being their dumb selves, Ron’s news team spikes the ratings (“It’s crap but they can’t stop watching!”), but when Veronica on the competing network scores an interview with Yasser Arafat and threatens to usurp all their viewers, Ron must up the ante.

When Ron is told, “Speculate on who’s driving the car,” we’ve arrived at CNN.

Meagan Good plays a badly written and badly acted producer. We know it’s the ’70s, but there are still innumerable problems in the way the filmmakers portray her seducing Ron and then later knocking him out. For example, stating that you “grew up with five brothers” might give you backstory on why you can fight, but that doesn’t give you license to knock someone out in front of numerous witnesses for verbally insulting you, especially if it’s a double-standard woman-on-man knockout (i.e. think of how offensive it would be were it the other way ’round?). There might be numerous wink-wink politically incorrect jokes about the outdated manner women were treated in the ’70’s, but why isn’t it seen as politically or just ethically incorrect to hit a defenseless man?

Written by Ferrell and Adam McKay, and directed by McKay, released 9 years after its predecessor, ANCHORMAN 2: THE LEGEND CONTINUES is a stream of disjointed jokes and ad-libs peripherally or hardly related to the plot. Each bit is unevenly funny (like the original), and as usual the gag reel is funnier than the movie.

There’s Ron’s flute solo on ice, channeling BLADES OF GLORY, there’s an extended isolation sequence of blind Ron, eking out an existence in a lighthouse with his reunited family, there’s unnecessary narration, there’s Fred Willard delivering the best line about the new 24-hour format (“I think they’ll stick with their integrity”); and Brick even finds true love with a woman-child as odd as he (Kristen Wiig). There are three KISS references. (I’m beginning to suspect Paul Rudd is at the root of ad lib KISS references: innumerable references in ROLE MODELS which he also starred in, the only other common denom being Judd Apatow. Now we wait for ANT MAN to gag about looking like Eric Carr and my suspicions will be confirmed…)

An example of an uneven gag: the crack smoking bit. After Ron’s team toke on air, we cut to the punchline shot of them being uncuffed while on the street, with Ron concluding, “Well, now we know you can’t smoke crack on TV.” Mildly funny, mostly perplexing. If we imagine the scenario, we can presume they were chased out here, tackled and cuffed before this scene, but to achieve this shot, the producers had to dress the whole street and light it for a night shoot (which is harder than a day shoot), including wetting it down, organizing background action and extras, including cop costumes, a prop cop car, the rights to film at that fountain, etc. Couldn’t they have donated this money to a museum or cancer foundation, instead of waste it on a joke that could have worked just as well if they were being uncuffed on the studio floor?

The audience watching Ron’s “entertainment news” is shown to be all rednecks. But let’s face it: anyone who subscribes to this hijacking of quality media is being a redneck in mind and body. WE ARE RESPONSIBLE for what ultimately seeps through to our square eyes and numb brains. Says Ron, “Why tell them what they need to hear? Why can’t we tell them what they want to hear?” And isn’t that how this crap fest started rolling downhill like a trolley with no brakes?

As in ANCHORMAN (2004), the best bit is the gladiator battle between the news networks, with “no touching of the hair and face.” Featuring power cameos by Sacha Baron Cohen for the superior BBC, Jim Carrey and the incredibly polite Canadian News Team, Liam Neeson for the History Network (replete with minotaur and John C. Reilly as The Ghost of Stonewall Jackson), Amy Poehler and Tina Fey for Entertainment News, Will Smith for ESPN, Kanye West as an anachronistic MTV VJ, and – wait for it! – Vince Vaughn reprising his Wes Mantooth (I die laughing just thinking about that name).

Strangest aspect of this biting movie is that real life entertainment news networks (which is – let’s face it – all news networks) embrace Ron Burgundy as a compadre, as if he is promoting their existence as worthy. Either they have a really good sense of humor, or they are, in fact, as dumb as ANCHORMAN 2 makes them out to be. As I watch another interminable car chase on a major news network… I’m guessing the latter.