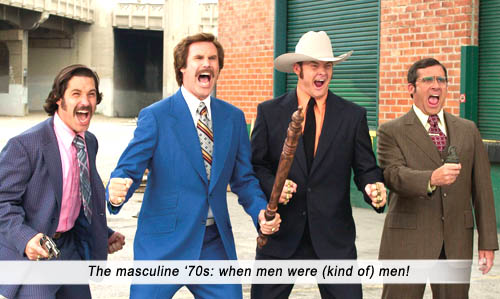 When The Anchorman was Man-Anchor.

Will Ferrell makes me laugh. I’m not afraid to say it anymore. His shamelessness knows no bounds and I, for one, salute his strangely misshapen nude torso.

In ANCHORMAN: THE LEGEND OF RON BURGUNDY, Ferrell is the blowhard, brain-soft title character, in love with his own self-proclaimed legend. And why not? His veteran standing and perfect hair have made him San Diego’s number one anchorman and a veritable god amongst newsfolk.

Into this perfect 70s world of Men (Men who “discovered the wheel and built the Eiffel Tower out of metal and brawn”), bringing her “exquisite breasts!” – comes Veronica Corningstone (severely luscious Christina Applegate), aspiring anchorwoman. 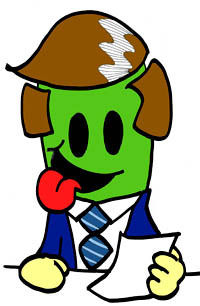 Anchorcuke: his hair was perfect.

Of course, this is open invitation to Burgundy’s all-male news team to conspicuously seduce this “woman with a small brain; with a brain a third the size of us. It’s science.”

Simply by being The 70s Male, Ron’s team gives us Truth In Jest: There’s Field Reporter, Brian Fantana (Paul Rudd), muttonchop sideburns and a cock of the head to match his jaunty, bellbottomed step; Sports Desk, Champ Kind (David Koechner), cowboy-hatted, beer-swilling Man’s Man, with an affinity for Ron Burgundy’s “musk”; and ambiguously-retarded Weatherman, Brick Tamland (Steve Carrell, whose way-off-script performances here and in BRUCE ALMIGHTY and THE 40 YEAR OLD VIRGIN indeed prove his mettle as a comic, yet which doesn’t excuse him from accepting the job in the remake “for American audiences” of Ricky Gervais’ comedic masterpiece, THE OFFICE. That ain’t right.)

And there’s Ron Burgundy himself – Anchorman (“I’m very important. I have many leather-bound books and my apartment smells of rich mahogany”), Jazz Flautist (“Hey, Aqualung!”), Legend (“Last time I looked in the dictionary, my name’s Ron Burgundy!”). From doing shirtless barbell curls in his office (“sculpting my guns”) to impress Veronica, to wailing, “I’m in a glass cage of emotion!” (while in a phone booth), Ferrell (who co-wrote the movie with director, Adam McKay) takes Burgundy on a mad joyride and abandons him somewhere between 70s chic and imbecile.

Ron’s team must endure the infiltration of female Veronica into their complacent All-Male world, as she steals away the heart and job of their beloved leader. Along the way, every aspect of 70s normalcy is tweaked to hyperbole, from the news team suddenly bursting into an a cappella rendition of The Starland Vocal Band’s Afternoon Delight, to Ron’s appraisal of the “new fad called jogging, or ‘yogging’ – I think the ‘j’ may be silent,” to hosing off Brian Fantana’s almost-lethal man-fragrance, Sex Panther.

The comedy hits on all levels, from the subtle (the television spots, with the News Team all looking up at the camera on cue) to the broad (Burgundy’s and Veronica’s love-making fantasy), to the insensate (the street battle of the Network News Teams, involving tridents, amputations and Roman gladiator man-nets). The usual suspects all cameo: Vince Vaughn (as competing Network Anchor, Wes Mantooth – after bequeathing this character name, where else can you turn?), Tim Robbins with a blond-fro (ditto with this ‘do), Ben Stiller as a seedy Spanish News Anchor, Luke Wilson (whose amputations in battle cause him much annoyance), and Jack Black as a hard-ridin’, hard-vengeance biker (“Did you just throw a burrito at me, Brosef?!”).

The dependably hilarious Fred Willard is Station Director (constantly apologizing on the phone for his son’s felonies at school), who fires Ron after he is fooled into swearing on air – a practical joke by Veronica that goes awry.

So begins Ron’s spiral into oblivion, wandering the streets in a hermit-beard, drunk on milk, whilst Veronica’s star rises as the world’s first female anchor. Ron must mine untapped reserves of Man-Reportage to rise to the occasion and come to terms with Veronica’s equality. In a bear den at the San Diego Zoo, all is resolved.

With its dialogue generally more “cerebral” than most SNL alumni offerings – as ridiculous as that may sound – and a cast willing to take themselves beyond the fringe for the cause, ANCHORMAN ranks alongside A NIGHT AT THE ROXBURY or WAYNE’S WORLD as a stupid, stupid idea that somehow went horribly, horribly right.