Skeptical scrutiny is the means, in both science and religion, by which deep thoughts can be winnowed from deep nonsense.
— Carl Sagan. 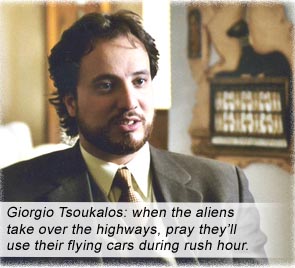 ANCIENT ALIENS is – like all von Däniken’s …of the Gods books – speculative fiction masquerading as hard science. Each of the scores of segments in this 5-part series starts off promising, knowledge dripping like blond ambrosia off naked Valkyrie shoulders, and then – oil slicked into a gutter of disinformation with red herrings, straw man arguments and narrators with scary voices.

If “science” is cited at all, it is approached as if it’s Mike Tyson: stupid, black and dangerous, especially if it tries to talk. Besides outlining complex things in simple ways, “science” is never utilized properly as the methodology that requires EVIDENCE to back up theories. Science is treated like religionistas treat it, as an alternate religion or peripheral disease that only gets in the way of wide-eyed speculation and ominous orchestra stabs.

For example, in Episode I the Egyptian Saqqara Bird is discussed, a 7-inch wooden carving of a bird with outstretched wings, dated 200 BCE. ANCIENT ALIENS speculates via its scary narrator, “Did ancient Egyptians carve this bird because they got the idea of flight from ancient astronauts?” Uh, how about dialing the conspiracy theory down to Mel Gibson? It’s a wooden bird – has it ever occurred to anyone that ancient peoples might have gotten the idea of flight from, uuuh, BIRDS? But the straw man is loose, there is “mystery” and the only answer is – Ancient Aliens! Hooray!

I can’t possibly refute each and every claim in the series in this short diatribe – but I’m sure every viewer can pick up a small box of intelligence at the corner store and use the instruction manual that comes with it to apply it to ALIENS. Unfortunately, most viewers don’t read their instruction manuals…

It seems these modern commentators (professors, authors, scientists, etc.) lack the imagination to comprehend that mathematicians, architects and astronomers could exist before Harvard, Oxford and NASA, even though they should be well aware of Eratosthenes, Ptolemy, Kepler, Galileo, Newton, et al. 5,000 years ago, mankind’s braincase held the same cubic volume it does today; no reason why ancient Egyptians could not utilize their intellects intuitively and figure out planetary movements and mechanical manipulation of superstructures. Modern “ancient alien” proponents only bring shame on themselves with their credulity – anything inexplicable is immediately attributed to Ancient Aliens, rather than the slightest nod given to human ingenuity. How were these massive blocks moved? Ancient Aliens! Why does this bas-relief depict a flying machine? Ancient Aliens! How did they know of Sirius B? Ancient Aliens! When I stub my toe on the bedpost – Ancient Aliens!

Giorgio himself (attired in his usual three-piece suit for maximum professorial sass) states, “Ancient civilizations were not dumb,” which is correct, but is followed immediately by the scary narrator describing technologically advanced ancient cogs and leaping rapturously to the conclusion/question, “Did ancient aliens make these cogs?” From cogs – straight to aliens! Nothing in between, huh? How about a little sugar for the ancient peoples you just lauded with intelligence?

Giorgio: “I think it’s the height of human arrogance to think that just because we can’t do it, another more advanced society can’t do it either.” He’s talking about faster-than-light space travel in this context (pertaining to aliens of course), but it relates to everything else in this series whether he realizes it or not. Ancient peoples have left behind evidence of their more advanced societies – but modern people keep saying aliens did it! What does it take to get credit for having a big brain in ancient Egypt?!

And speaking of big brains: Episode II features Pharaoh Akhenaten (father of the famous Tutankhamun) and his elongated skull – short shrift is given to the tragedy that maybe he was deformed, passing on this deformity to his children. Instead, he is accused of being a human-alien hybrid. Of course! How else could a human have a slightly enlarged head but for – Ancient Aliens?! 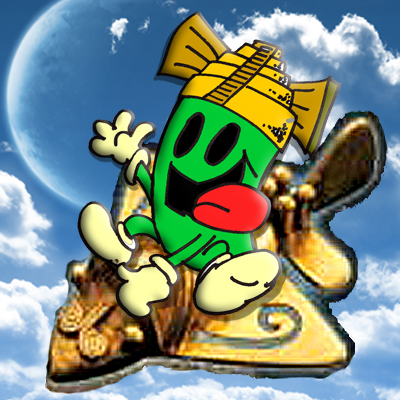 Carl Sagan noted, “Extraordinary claims require extraordinary evidence.” The people propounding the alien-tastic theories (which includes Erich von Däniken himself) often make the unscientific mistake of presenting the artifact itself as the only evidence for their extraordinary leaps of fancy. “See this ancient pendant shaped like a space shuttle? Since there were no space shuttles in ancient Egypt – Ancient Aliens!” See this thing that looks like a spaceship in the Virgin Mary painting? Well, it IS a spaceship! Stop pretending you can’t see it! Squint harder!”

The insult to our ancestors’ intelligence – by claiming that aliens aided their wondrous accomplishments – becomes ultimately an insult to OUR intelligence. Because outlandish claims backed by zero evidence prove only one thing – that aliens aren’t the only ones doing the anal-probing.

The irony is that those who call themselves “believers” of these speculations are actually devoid of belief – in humankind’s ingenuity. Only those who cannot conceive of intuitive or creative thought would be prone to believe – or could be cajoled into believing – that those who came before them were of such low mental capacity that they had to be spoon-fed by spacehogs.

Von Däniken, like Immanuel Velikovsky and other pseudo scientists, is a great snake-oil salesman, and good luck to him and his entertaining cash cow. But remember that’s what it is – entertainment, diversion. He hit upon a meme which continues to thrive as “science” only due to the laity’s ignorance of physics, spacetime, orbital mechanics, biology and astronomy, not to mention an unenlightened view of ancient civilizations. And the straw man “mystery” comes clear – it is not whether aliens are visiting or aiding mankind, it is the general public’s lack of curiosity that allows simple explanations to remain “mysteries.”

More dangerously, the “ancient aliens” meme, after being discredited and disowned by science, has become a religion, because adherents to these theories need no facts to believe the theories. And if facts are presented contra to their belief system, adherents simply throw the facts out or reinterpret them to their own ends. Amen.

Some of the speculations – the Great Pyramid being an energy generator; 35-foot-diameter circular saws to carve megaliths; Noah’s Ark being a DNA bank rather than a boat – at least attribute thoughtful technology to ancient people, and are interesting because they do seem to be leading towards an ultimate truth. Until that unnecessary leap is once again made – Ancient Aliens!

On the wind-swept Giza Plateau, no way were Egyptians smart enough
to utilize wind power…

A few years ago, Dr. Maureen Clemmons, experimenting independently and resourcefully, using only materials available to ancient Egyptians, raised multi-ton stone obelisks with kites and pulleys, demonstrating that wind power could have been the simplistic engine behind Egypt’s pyramids. I was privileged to be minimally involved in her project and was made aware of the behind-the-scenes politics that made veteran Egyptologists publicly denigrate her theories without any research into them, for the simple reason that they didn’t want their names replaced in the history books.

Likewise, the “scientists” commenting in this ANCIENT ALIENS forum studiously avoid theories forwarded by anyone outside their clique. They insist on red herring arguments like whining over how hard it is to pick up stone blocks in a dead lift with ground-based modern cranes, yet never consider Dr. Clemmons’s relatively easy method of kites, pulleys and wind.

If you’re a UFO nut (or as they like to call themselves – snigger – “Ufologists”), you’ll love ANCIENT ALIENS, as it is structured in the same “investigative” manner as those 1970s documentaries about Bigfoot, the Bermuda Triangle and the Loch Ness Monster. All it lacks is Leonard Nimoy. As much as the producers believe they are presenting, heh, “all-new evidence” you’ve seen it all before. You’ve either gullibly accepted it all before or rationally poo-poohed it all before. Or you’ve been like me – as a child, believing every word, as an adult, marveling at the intriguing facts, yet seeing through the red herrings and straw man non-sense to the economic entertainment niche it fills.

I would love nothing better than to discover that ancient aliens – or even modern aliens – actually exist. (Episode II perpetuates the CLOSE ENCOUNTERS visual of big-headed, bug-eyed, pinkish 3-foot-tall extra-terrestrials, which UFO nuts call “grays.”) It would mean the universe is more interesting than we think – AND it would discredit all religions and their provincial man-gods (that have never spoken of extraterrestrial aliens – or even humans traveling backwards in time – in any scriptures; being ignorant of other humanoid cultures in the universe doesn’t bode well for gods who claim omniscience). And that can only be a positive day for Earth humans.

Also, claiming that ancient astronauts were the catalyst for modern religions, christianity included, negates every god’s divinity. So I can’t figure how christians think it’s beneficial to promulgate the ancient astronaut idiocies. If “God” (you know – I AM THAT I AM, the Messiah, the Savior, etc.) was merely an astronaut that people considered a deity, it means nothing short of the dissolution of their own religion. And here they are in Episode IV, crowing over numerous christian-based paintings showing Virgin Mary, Jesus, et al, with seemingly extraterrestrial craft hovering in their backgrounds! Talk about another nail in your own crucifix!

Unfortunately the “ancient aliens” money-machine continues to grip the limited imagination of The Great Unwashed for completely wrong reasons – not because it is driving closer to truths with every new documentary released, but because – as Richard Schickel notes in his 2010 Eastwood biography, Clint: A Retrospective – “A mystery solved is a mystery forgotten. A mystery not fully resolved has the potential to hold you for a long time.”

Fool me once, shame on you…
I must admit I too was a von Däniken victim/disciple until I reached the Age of Reasoning (about 14). I must also add some Full Disclosure: one of the head producers/consultants on ANCIENT ALIENS, Giorgio Tsoukalos, is a good friend of mine, boldly intelligent, linguistically-articulate, world-educated and (for the ladies) certifiably man-sexy (I’m still trying to get my biceps as big as his).

I’ve told him personally I am exhilarated for him that he successfully sold his ideas as a TV show, and simultaneously horrified that there was a market to buy those specious ideas. Horrified, but not surprised, in this American entertainment media climate renowned for systematically dumbing down world culture.

Everything I say here has been said to his face over beer and buffalo wings. He laughs in my face because he thinks I’m uninformed and I laugh in his face because I KNOW he is…

STONE CRAZY
–screenplay–
A Modern Comedy about Ancient Egypt.
A film based on the wind theories of Dr. Clemmons.
Hosted at: TelltaleFactory.com
(Telltale Factory website being upgraded: Jan 2020)