Giorgio A. Tsoukalos is at it again! Still consulting producer on ANCIENT ALIENS; still talking about jaguar priests, messenger angels and ancient astronauts as if they really existed; still scaring us with his ineluctable knowledge, his detailed research and his big hair. 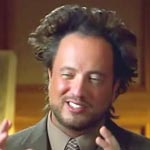 One Degree to Ancient Alien…
FULL DISCLOSURE: I must again remind my hybrid readers that I am friends with the inscrutable Mr. Tsoukalos, consulting producer and ubiquitous talking head on ANCIENT ALIENS THE SERIES. He is charming, persuasive and indubitably intelligent. I afford him all the respect of a cunning linguist and master debater. On many a drunken bar-hop, I’ve tried to talk sense to his poor deluded alien soul. It hasn’t helped. (Maybe it’s the drunkenness. Maybe it’s the hair…)

Robert Clotworthy narrates ANCIENT ALIENS SEASON TWO with the voice of a man who has never quite outgrown the fear that a hand is going to come out from under his bed and grab his ankle.

We are also treated to primitive drawings on stone slabs, and rock caves and in medieval books, zoomed at the twirling camera with a wicked orchestra stab and telecine flash. That oughta prove it’s true!

Now I’m not going to dismiss these people as outright “crazy” because there are some compelling arguments that fit very neatly together if you squint with your mind real hard. In the grand tradition of IN SEARCH OF… ancient civilizations and artifacts are undoubtedly fascinating stuff, so we occasionally hit pockets of actual scientific knowledge – sprinkled liberally with mythical tales (which are also interesting), but always tempered by speculating just a little too far over the edge of the abyss. 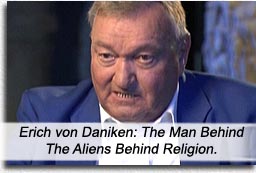 Two Degrees to Ancient Instigator…
Erich von Daniken commands much more screentime during this series. He is, after all, the Pimpmaster General when it comes to Ancient Alien Astronauts (Chariots Of The Gods?, 1968). Ask him anything about Machu Picchu, the Great Wall of China or Lady Gaga and he’ll relate it back to extra-terrestrials.

Don’t get me wrong – it’s good to ask questions, no matter how crazy they sound. That’s what Scientific Method is built on. Trouble is, AA theorists like to believe they adhere to some form of Scientific Method when they clearly don’t: they are too comfortable asking questions and then exploding onto “faith-based” tangents that in no way relate to the original question, never mind lacking evidence completely. 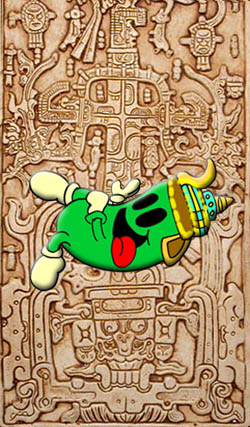 Speculation is also a valid scientific precept, but as the evidence gets thinner, ANCIENT ALIENS becomes one long succession of talking heads prefacing their gaboon with “In my opinion…”The show brings in a few accredited scientists, like the great Paul Davies (Professor of Philosophy, The Eerie Silence: Renewing our Search for Alien Intelligence, 2010) and physicist Michael Dennin, yet after the scientists’ snippets of information, the show then piles on speculation behind them. They do not disrespect the scientists or twist their words, but rather use them as credible corroboration for the pile-on that invariably follows.

Episode 205, Aliens and the Third Reich, is ludicrous – basically blaming everything that Hitler did on his contacts and/or influence by ancient aliens. Heil, Zardoz!

In Episode 206, Clotworthy actually narrates about Leonardo Da Vinci’s inventions, “Could he have figured these things out by observation and intelligence or was it given to him by an extra-terrestrial source?” Who writes this shit?– Ancient Aliens, of course! Thanks for insulting one of the greatest minds of humanity, knobs!

As the series progresses, we realize they are using the term “mainstream scientists” like a derogation, in the same way mongoloid Sarah Palin uses “lamestream media” – as a jibe at people who think they know more than you just because they’ve STUDIED FOR YEARS…

At times, the talking heads (Tsoukalos included) would say, “The god that I believe in [would not need transportation, etc.]” But isn’t the “god you believe in” a misapprehension of ancient astronauts? You’ve just been telling us that for the past 2,000 years. Do the AA people want it both ways: for there to be ancient people creating religion erroneously and for there to be actual supernatural gods as well?! That’s cheating!

THE MOST IGNORANT STATEMENT of the series is by Robert Bauval:
“We have logic, we have intuition, we have our senses, and to limit ourselves through the scientific route is a mistake.”

What exactly do you think the “scientific route” is, Mr. Bauval? The fact that you “ask questions” is your first step in employing that scientific route you spit on. Science is a methodology, not a close-minded religion, as your Ancient Alien fanaticism seems to resemble, with that damnably idiotic statement. The fact that you arrive at erroneous conclusions even whilst using scientific method doesn’t mean you aren’t using it. But you can be happy: you’ve got something in common with your low-browed ancestors – they didn’t understand science either!

THE MOST ENLIGHTENED STATEMENT of the series is by Giorgio Tsoukalos:
Pertaining to a monolith: “Am I suggesting that he did this with extra-terrestrial technology? No, because I don’t know. Am I excluding that possibility? No.”

And that’s probably the best we can shoot for with this whole beargarden. Remain agnostic. This doesn’t stop Tsoukalos making outrageous claims in Episode 210 about mankind being a hybrid race of aliens. (Save the really good fiction for our script, Giorgio!)

Let me clarify: I would LOVE ancient aliens to exist; I would love those uneducated “mainstream scientists” to discover extra-terrestrial intelligence and *life as we know it.* But wild speculation is not the way to either discover ETs or communicate with them. There is so much more that you people could be doing in the Search for Extra-Terrestrial Intelligence, instead of gathering in dark rooms and effusing over blurry slides of alleged spacecraft.

While sitting square-eyed before the onslaught of straw man arguments, red herrings and speculation enough to fill a bible, I realized there are two great ironies at work in ancient alien culture.

How can religious people – christian, muslim, jew or jedi – profess a belief in ancient alien theories? The theories themselves NEGATE the supernatural, magical deities these people believe in.

Then again, it’s no surprise that religious people gravitate towards AA theories – they already have a propensity to believe in fantasies without evidence.

The non-religious people who subscribe to AA theories are those who were once religious and now believe themselves seekers of truth by stepping outside their safety zones, feeling a thrill of impertinence in saying god is only an astronaut.

Belief in something doesn’t mean you are qualified to have access to it. We all “believe” in electricity, yet only a miniscule percentage of us are qualified to run an electricity station. The AA theorists will be shunted aside by their own “gods”! In favor of communicating with those “mainstream scientists” that AA spat on as unbelieving fools.

Whether those mainstreamers “believed” or not during this fallow time, it will be THEM – the qualified scientists, physicists, geneticists, mathematicians – who will interact with your precious aliens. Let’s face it, AA people, if all those conjectures you harbor about government cover-ups and secret bases is TRUE at this very moment, the reason you think it’s conspiracy is because it IS. Those trained and educated scientists are not going to let the likes of you speculating credulous bastards anywhere NEAR actual aliens!

We are quite aware of the wild theories of ancient aliens building pyramids, Stonehenge, and doodling on the Nazca plains, but by the time you reach the last few episodes of ANCIENT ALIENS, your jaw will drop at the audacity of the claims regarding extra-terrestrials’ involvement in human history. The AA people push the envelope to such absurdist lengths, they seem to be daring us to call the men in white suits; reveling in how far over the edge of rationality they can take it without being remanded for clinical insanity.

The only things missing are Bigfoot and the Loch Ness Monster… uh oh, I think I’ve just given these clowns ammunition for Season Three.

Ten steps into the crazy crazy…