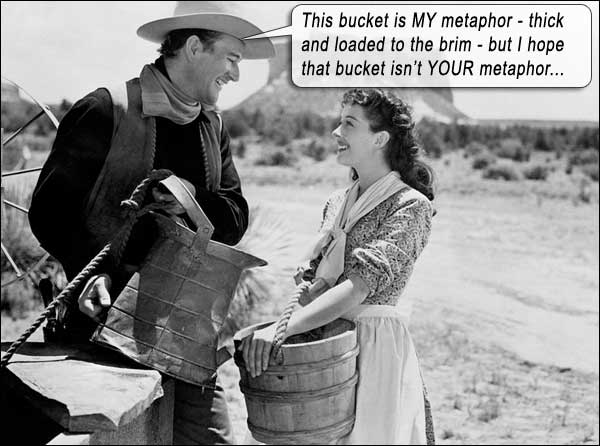 Virgin and the Whipped Man.

ANGEL AND THE BADMAN is a John Wayne western made for another era. The world’s cultural shifts since 1947 render this movie not only dated but naïve past the point of Puritan. Its message of violence begetting violence is, of course, eternal, though its solution of peace begetting peace is undermined by the plot itself when violence threatens to end our hero’s life, and the only thing that saves him – is violence.

A gunman is sheltered by a Quaker family whilst injured, the Quaker’s daughter falling for his rugged aspect (we presume she’s never been around man-musk before), whilst he is drawn to her lifestyle choices (we presume he’s curious to see under her seven layers of clothing).

John Wayne is the gunman, Quirt Evans (already feeling the culture-shift – from the Spanish word for “quarter,” Quirt was apparently a toughguy name back then. Was he bullied as “Squirt” in school?), and wide-browed Gail Russell is Penelope “Penny” Worth, with a figure that bangs hard against her several holy undergarments, and a hairstyle like Paul Stanley in the far-flung 1980s.

Penny and her father (John Halloran) come upon an injured Quirt during a desperate midnight ride, and help him get a message to a telegraph outpost. (Do the kiddies of 2020 even know what I’m talking about any more?) After Quirt delivers the message, he collapses conveniently into Penny’s arms, almost spooning. Russell, an insufferable theatrical actor, “indicates” that her wetness is seeping through all seven layers of petticoat, panty and dirndl skirt. The telegraph operator informs her Quirt is a legend, and the only way you can be a legend in the Old West is if you’re a gunfighter or a whore. That only makes Penny wetter.

This Meet Cute is so contrived, so staged, with Quirt in such a studied embrace and Penny nuzzling like a cub against his grizzled cheek, it might as well be one of those comedies where she “accidentally” spills water on his pants and breathlessly entreats, “You should take them off so I can dry them.”

Father Worth allows Quirt to recuperate from his gunshot wound in his family home, a subplot which is forgotten as soon as Penny lays eyes on Quirt without shirt. Now it’s social-message-driven-by-romance all the way… We can understand Penny falling immediately for Quirt (to wit: 30-year-old Quaker virgin), but Quirt falling for the preachy Penny is another matter. Writer-director James Edward Grant felt he needed to emasculate his leading man (a paragon of violence) to get his anti-violence message across, and Quirt is questionably taken through an arc where he ultimately renounces his adventurous life for a mundane one. In other words, Quirt becomes skirt.

The indoctrination begins; the systematic wearing down of Quirt, Penny didactically explaining Ape Law as they stroll romantically over the farm, with the promise of Quaker puss the ultimate reward if Quirt can keep his hand off his gun. And if he can avoid shooting anyone with his pistol also.

It’s inauthentic and terrible acting to say the least, and is thankfully reined in from being an all-out Scientology ad, as director Grant uses the religiosity only as a signpost to depict the “bad man” turning to the way of the “angel.” 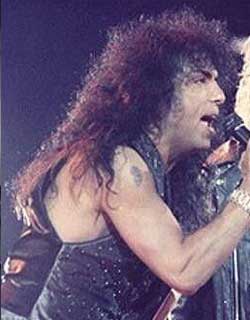 Paul Stanley –
the Gail Russell of our times. 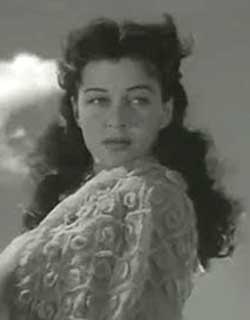 Gail Russell –
the Paul Stanley of the Old West.

And turn Quirt does, innocuously at first, Penny’s persistent goading on peaceful instead of violent measures inspiring Quirt to do a favor for the Worth farm, using only his fearsome rep to provoke a troublesome neighboring farmer into sharing irrigation water, without once pulling his gun. (Fun Fact: Paul Hurst, who plays old farmer Carson, was born in 1888! Exactly 100 years before Paul Stanley’s 1988 hairdo!)

Then the family brings Quirt right into the cult at a “meeting,” bequeathing him a bible with tender words of appreciation. Someone advises, “Only a man who carries a gun ever needs one.” (NRA say wash your mouth out, son!)

Quirt’s cowboy buddy Randy (Lee Dixon) appears, to laugh at Quirt’s pussification, while offering him a mercenary job. Blood rushes to Quirt’s cowboy nerves and he immediately pulls aside a Quaker wimp who has eyes for Penny, telling him to MARRY HER NOW, so that Quirt can return to his life of derring-do with no qualms. What might have been a sober plot point is served up as a comedic jab with no follow-through.

Quirt does the merc job – with no guns, using sticks, fists and horses-as-weapons to stop cattle rustlers. He and Rusty get paid and visit a saloon, where he wades into a barfight just for the man-taste of it. This diversion is only to establish that Quirt has lost none of his masculinity, as in the next scene he turns down a hooker who pokes fun at his bible! Opening scenes, movie went to great pains establishing Quirt’s big balls (“the constitution of a mountain lion”) so they allowed him the barfight, then avoided soiling his soul with his favorite whore.

Quirt returns to the Worth farm, where Penny is pouting, telling him she was raised with the belief “that people love, marry and stay together forever” (whereupon I vomited a little in my mouth). But by his own admission, Quirt is not a farmer – he “gave up shoveling hay when he was 15.” Now he’s tilting at settling down with this dollface because – he’s older? wiser? tired of being shot at? His motivation as a Real Man has always been the Quirt Squirt, but is he now implying he will never swear again, never draw his gun again, toil from rise to set, with a virgin nag who will pout whenever he goes into town because of his history with dames and gambling tables? In one scene, we see Quirt standing by a plough in his dandy cowboy duds, watching Penny sorting chickens… uh, those aren’t ideal workclothes, man. And you don’t work a plough by just standing behind it with an erection.

Speaking of hard-ons, Marshall Deus Ex (Harry Carey) keeps popping out of nowhere to remind Quirt he’s gonna hang him some day, and doesn’t believe Quirt is considering settling down. We don’t get any taste of what crimes Quirt actually committed for Marshall to crave him so badly, but we do know that throughout the movie, a baddie named Laredo (Bruce Cabot) has been gunning for Quirt, probably for those same crimes; Quirt’s wanted on both sides of the law (i.e. he’s a bad boy). 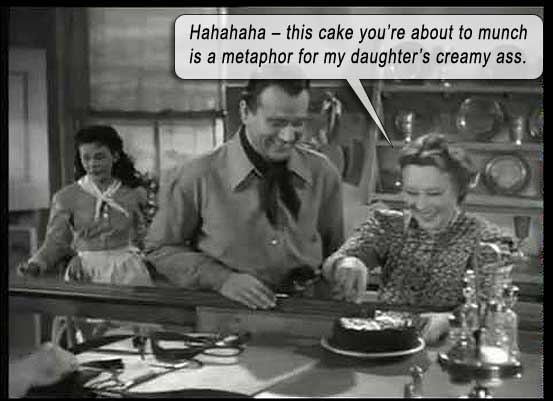 John Wayne, so young and handsome and racist. ANGEL AND THE BADMAN would be his 88th credited feature film (not counting the scores of uncredited roles he did on contract to Fox Film Corporation), and would be his first as producer. Established as a major star in John Ford’s STAGECOACH (1939), Wayne, now 40, was in the beginning stages of looking like himself in his older years, the familiar runneled visage we all know as “Duke.”

After an ambush by Laredo, Quirt faces the conundrum that if he kills Laredo for attacking Penny (which is the manly thing to do), Penny would disrespect him because he took a life! So Quirt eventually relents to the “peaceful” ethos (or is tired of waiting for that unkempt 1800’s bush) and gives up his guns to Penny – just as Laredo is about to shoot him in the back. (Does no one see the unintentional metaphor of guns representing masculinity and as soon as he handed his masculinity to a woman, his life was threatened by the masculinity of another male?) That fanatic chick’s blinkered faith was going to get her reformed man shot dead! Quirt turns without a gun – and Laredo draws on him anyway, armed or not. And is shot by Deus Ex Marshalla from offscreen.

So the message of peace is undermined if violence has to be used to curb violence. Earlier, the message of peace begetting peace was illustrated well when the troublesome farmer befriended the Worths, on the strength of being asked nicely by Quirt to share his water. (And even then, it was a reputed violent man “asking nicely” – with the unspoken threat of violence if he was refused!) But here, Marshall didn’t employ peace to deter Laredo’s violence – he just straight up shot him! The actual message is not just that violence begets violence, but that violence will always dog those with violent pasts, even if they become men of peace. Quirt lived by the sword and will probably die by the sword, and must live out his life with his gun cocked. And keep his pistol nearby.

But the maudlin love story bashes down all contradictory concepts. When they first took him in, Quirt was incensed that Penny had emptied out his pistol. Now he loves it when she empties out his gun.