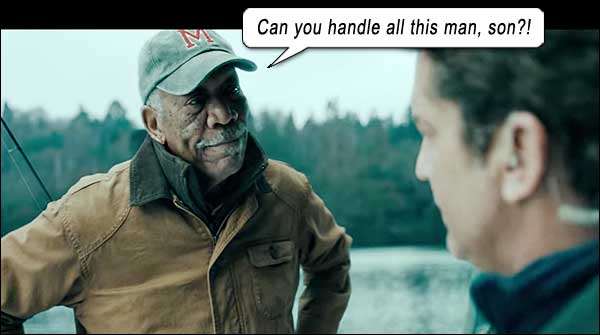 Falling down the cliché tree and hitting every branch.

Secret Service agent Mike Banning, personal bodyguard and guardian angel to the American President, is framed with the attempted murder of his charge, and must go rogue to fight for his innocence.

ANGEL HAS FALLEN is a cliché wrapped in a trope, candy-coated with eye-rolling stereotype… but it is – so – damn – well – made! Stellar production values keep ANGEL an enjoyable B-movie chase-fest, explosion-fest, guilty-pleasure fest.

Gerard Butler reprises his role as Mike Banning, once almost-Superman, now demoted to wily Batman who must use his wits as well as his willy. Morgan Freeman is President Faux-Obama (like a black president will ever happen again in this shithole failed-state called America).

Danny Huston is Wade Jennings (did they get that name from Clichéd American Names For Generic Screenplays?), who is a military training specialist and friend to Banning (they saved each other in some previous war – you know the backstory). Movie opens with a hardcore training sequence at Wade’s facility that shows us Banning’s hardguy skill set; we find out he’s in line to be Security Director at the white house and Wade asks Banning to put in a good word for him, to hire his firm to train the SS… I mean… even if Wade didn’t turn out to be the mastermind behind the president’s attempted murder – SPOILER ALERT! – the fact that he asks Banning for the job on the basis of their friendship means we’re talking no-bid contracts. Which are illegal. Maybe the FALLEN audience is too young to remember the Ku Bush Klan’s illegal no-bid contracts with the merc firm Blackwater, while prosecuting illegal wars in the Middle East, but I got two words to remind you – Dick Fucking Cheney. (Wade even mentions the Blackwater scandal – the arrogance of this prick!) Yet this felony now seems so innocuous compared to the Real World criminality of the Dumbo Donald white house that it just shudders off our shoulders…

Banning’s wife Leah is played by Piper Perabo (it’s been so long since this movie’s predecessor, I honestly couldn’t remember who his wife was; I remember she was blond – that always tracks with me – but for the life of me… Ah, it was the much sexier Radha Mitchell!).

Banning is having migraines and dizziness and visiting non-White House doctors secretly, so he’s considering declining the Director’s job due to Gettin’ Too Old For This Shit. Lance Reddick is outgoing Director Gentry (concierge Charon from the JOHN WICK movies). Freeman is looking inordinately old as well, like he may keel over anyway long before the script calls for him to do so. He wants Banning as Director – but he doesn’t want to hire Wade’s training firm. Uh-oh.

That’s when the missile-drones start flying.

Again, the production values in this film are incredible, and we can viscerally feel the power and thrust and speed of these killer drones. On a lake getaway, the President’s whole retinue is killed by Pretty Orange Explosions, with Banning the only survivor, managing to save the Pres, who goes into a coma.

Tim Blake Nelson is Martin Kirby, the weedy Vice President, who is sworn in as Temp Pres. He seems awfully reluctant to accept the responsibility, which raises our eyebrows. No VP is that gimpy; even the nicest ones are ALL waiting in flop-sweat, rubbing their hands in expectant glee for the POTUS to meet an unfortunate end, so that they can assume the heady, hoary power that no citizen in their right mind would have voted them into. Soon enough, we discover Kirby is a slimeball… 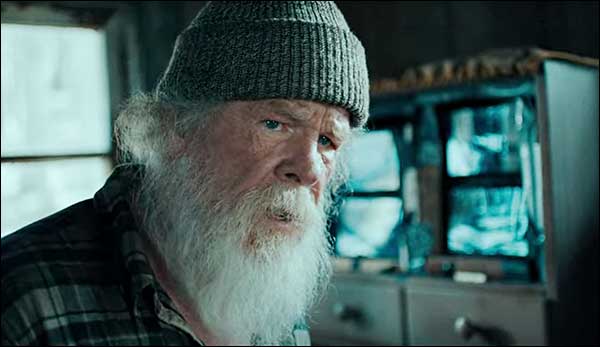 All the good little boys and girls can’t wait for Saint Nick to bring them presents this year.

Banning wakes in the hospital cuffed to the bed. His DNA and hair were found on the drone launcher, with some of the drones’ explosive residue found in his garage! FRAMED! And of course, the spineless, insecure U.S. government doesn’t need much to send it into a paranoid blaming tizzy. With the Pres unconscious, there is no one to stop FBI agent Thompson (Jada Pinkett Smith pretending she’s real badass) charging Banning with attempted murder of POTUS, plus the murder of the full SS team.

Transporting Banning to jail, the police convoy is accosted by a black ops team that kills all the cops and rescues/kidnaps Banning. In the black ops car, Banning fights his way out, in a scene where stunt coordinator-turned-director Ric Roman Waugh shows us that he’s probably a better stunt coordinator than director – we cannot make head or tail of the million cuts in the dark, close-quarters battle. Waugh is following in the footsteps of Chad Stahelski (JOHN WICK) as a stuntguy-turned-director, and most of the film is well done, because he’s got the ‘nads to hire the best production team; there are just a few lapses in judgment along the way.

We discover the black ops team is Wade’s, and yes, they’re framing Banning for the attempted assassination and keeping him alive so that the gubmint have a scapegoat to chase. At about the same time we discover the slimy VP is giving Wade his orders.

FBI Thompson is all over Banning for having bank accounts that trace back to Moscow— Uh, is this really the best plot point that co-writers Robert Mark Kamen, Matt Cook and Waugh want to explore, while in Real Life an actual Moscow agent sits in the white house with bank accounts, bribes, money-laundering and backdoor kidnappings and murders that trace back to Moscow for the last 40 years?

Like a Golem sucking diseased oxygen, Nick Nolte appears as Banning’s rasping dad, an ex-special forces guy, hiding out in the deep forest; one of those stereotypical conspiracy-theorists whose theories are all, in fact, correct, yet everyone still looks sideways at them. Banning: “Stop with the Big Brother shit! Your country didn’t betray you – you betrayed yourself!” Demonstrably wrong. As evidenced by Banning’s current situation! Undeterred, Dad Nolte gives an impassioned anti-government speech, then lights up the night forest with Pretty Orange Explosions to kill a bunch of Wade’s assassins who picked up Banning’s trail. Dad Nolte’s throughline and redemption with Banning’s family is actually very touching.

Movie devolves to shootouts between Wade’s forces and Banning leading Gentry in protecting the President, with an explosives budget that could feed a Third World country. The final fight scene between Wade and Banning (of course) is creative – guns then fists then knives, with a sweet stab to Wade’s axillary artery (under the armpit) to end the picnic. (I’ve seen this move in a few modern films now, where the combatants were special ops; so I figured they knew something lethal about that part of the body – sure enough, that artery is so close to the heart, severing it will cause gouts of horror-movie blood, as well as incapacitate that arm and fingers.) 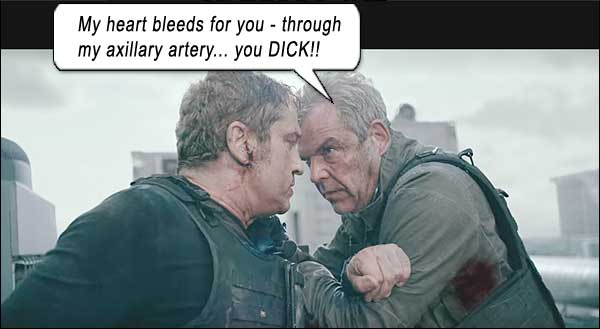 We know the President is going to survive because no American presidents die in American movies (except Lincoln and Kennedy).

And this movie is living out some kind of vicarious fantasy for us, in that we can’t actually impeach or convict the Real Life fake-president (for all the criminals who prop him up) – but we can cast a BLACK PRESIDENT for him to scowl over like the spoiled bitchbaby that he is; and we can’t actually jail the Real Life VP Pence (because he would enjoy being the block’s bottom bitch way too much) – but we can cast a dweeby little shit that takes a fall as a traitor, that will send a clear message to the white house: the majority of We The People wants you both CONVICTED like the felons you are. Until that day –