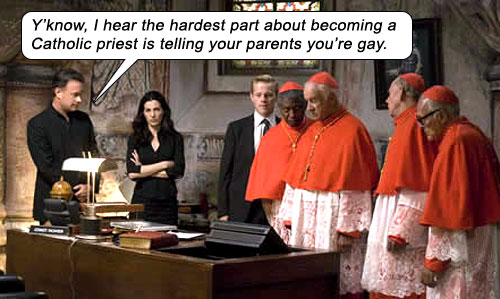 Another fine mess the Catholic Church has gotten us into!

The Pope has just died and the archbishops next in line to be God’s Bottom Bitch have been kidnapped by the Illuminati, who threaten Rome with implosion by anti-matter if they don’t stop being irrational religious fanatics – “science obliterating religion.” 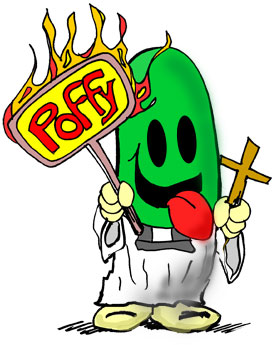 Well, Rome can’t stop being irrational religious fanatics, so the Vatican shamelessly calls on Robert Langdon again despite that business with The Da Vinci Code where it covered up the truth about Jesus’s ancestors after he unearthed it. Undermining his authority wasn’t enough, now the Vatican wants him to save its unholy ass, enlisting his aid to decipher the location of the anti-matter bomb, for which the Illuminati have left clues that only a cunning atheist symbologist could follow and there’s none of them aroun– oh, dash it all! What are the odds?!!

Through his staggering knowledge of religious symbology, arcane scripture, medieval history and a fair share of gobbledegook that writer Dan Brown has made up off the top of his head, Langdon crisscrosses Rome following the trail of murdered archbishops, before locating the bomb and letting Obiwan Kenobi dispose of it.

And just like it did when Langdon uncovered the Da Vinci Code, the Church then issues another press release undermining Langdon’s participation (and bribing him with a precious Galileo text to keep his mouth shut), lying that it was The Victim in an unwarranted attack by extremists – not one of the news reports mentioning The Illuminati, or the fact that the Illuminati’s vendetta with the Catholic Church is blowback for the Church unrepentantly torturing and killing Illuminati in medieval times. Langdon outlines quite clearly how the Church resisted the Illuminati “illuminating” the Church’s superstitions with rationality.

And then Christians have the temerity to question how “God” can allow bad things to happen. Keep in mind these people use a CRUCIFIXION as their symbol of peace and love.

Armin Mueller-Stahl is an archbishop with designs on popehood; Stellan Skarsgård is head of Vatican security, with such a big puss on his face he might as well have “Red Herring” tattooed on his forehead; Pierfrancesco Favino is a cool Euro detective who just screams Nice Guy; composer Hans Zimmer evokes the right level of religious scariness with his dark, cloudy, ominous score; and Ayelet Zurer is the hot chick scientist responsible for creating the anti-matter (or should that be “un-creating” it?), a plot point which brings in “science” only as a whipping boy.

I’ve grown incensed at the way “science” is spoken of in movies that advocate ignorance (i.e. “religious” movies). Though the film’s producers pat themselves on the behind for inserting a scientific theorem as a plot point, the Illuminati – the scientific contingent – are portrayed as one-dimensional villains and everyone in the film is allowed to refer to “science” as if it’s just another religion. Langdon loves beating down people’s misconceptions on Christmas and Easter and other superstitions, yet he is mum when it comes to people regarding science as if it is competing with Christianity for “believers.”

Ewan McGregor is the Pope’s consiglieri, a post called the “camerlengo” (which comes down to us from a long time ago, in a galaxy far, far away, meaning “murderous religious zealot” or “Jedi”). He gives an impassioned speech demeaning “their new god, Science,” like it is an alternative religion trying to replace Christianity’s myth-based religion with its own myths. MacGregor’s priest is meant to be a misguided ignorant character – trouble is, in their own ignorance, Christians in the audience AGREE WITH HIM.

Science is not a religion, science is not a deity, Science is a METHODOLOGY based on EVIDENCE; it is an EVER-MORPHING PROCESS, constantly replacing outmoded theories or facts with newer ones based on EXPERIMENT and RESEARCH.

Langdon clearly explains: “The Church forced the scientists out because they were trying to bring intelligence to the Church… 1668, the Church kidnapped four Illuminati scientists and branded each of them on the chest with the symbol of the cross, to purge them of their sins, and executed them; threw their bodies out onto the street as a warning to stop questioning the Church on scientific matters. They radicalized them; the purga created a darker, more violent Illuminati bent on retribution.”

Not only does the Church definitively prove it is against the methodology of science, it terrorizes those who bring that intelligent methodology to it. The Church is not just the villain in this movie, but the villain to civilization itself.

Be careful – these are men of god.
— Assassin, to Langdon.

Langdon dodges the question of “belief in God” – because he’s Tom Hanks, America’s sweetheart. When Obiwan asks Langdon point blank, “Do you believe in the Dark Side of The Force (i.e. God),” Langdon suddenly gets unnecessarily eloquent, “My mind tells me I will never understand God… and my heart tells me that I’m not meant to. Faith is a gift that I have yet to receive.” A simple no would do, Forrest.

I appreciate the fact that Robert Langdon is smart, but someone call 1-800-EMOTION and get this guy a charisma transplant. Or at least buy him a few vodkas. Hanks gets this close to toppling Nicolas Cage for the Mourning Face of the Year Award. And he is such a wealth of knowledge, we just want to slap him. Usually I welcome powerful minds (as in V FOR VENDETTA), but Dan Brown’s writing under Ron Howard‘s direction has a knack for annoying even the scrappiest Crossword fanatic. Things lead to other things that have so little to do with the former things that we just throw up our hands on the convoluted plot and simply hope the hot chick will get her knockers out. As much chance of that as an angel dancing on the head of a lightsaber.

Of all the Vatican on-scene news reporters (German, Spanish, Italian, etc.), the only reporter to even mention the word “terrorist” is the American. America: the most guns, the most gutless. (Maybe that explains the most guns.)