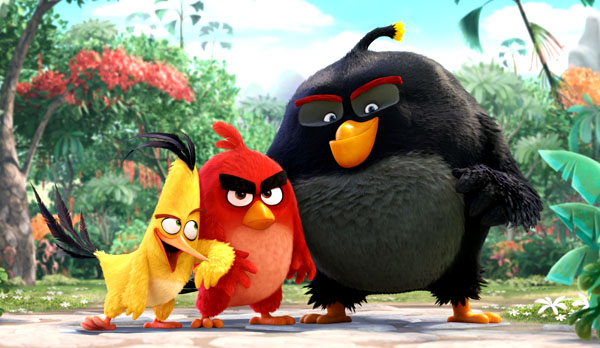 “I’m an Evan Peters man myself, but I can see why you might think
Aaron Taylor-Johnson is the shizzle sizzle…”

A flock of flightless birds on an isolated island has their eggs stolen by a group of pigs. The birds angrily get their eggs back before the pigs can make an omelet. Shakespeare this ain’t.

THE ANGRY BIRDS MOVIE is the animated cartoon based on the “most downloaded freemium game series of all time,” Angry Birds (created by Rovio Entertainment). The Angry Birds brand has infiltrated so much media (cartoons, spinoffs, plush, books, games), it is impossible to extricate it from modern culture; this movie is merely another signpost in the Angry Birds landscape. 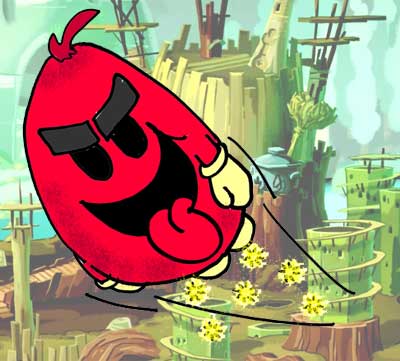 And guess that one person who has never downloaded the game, never watched the cartoons, never once toppled a piggy house with an angry bird? Yup, THIS guy… which makes me the MOST qualified to review this movie, because I am not tainted by prejudice. I’m not going to compare the movie’s veracity with the AB Universe at large. Does THE ANGRY BIRDS MOVIE stand up on its own?

Yes. It’s a kiddie’s movie, funny and cute and rounded, with good gags predicated on its cuteness, and as many opportunities for merchandising as possible, serving its purpose of jetting the Angry Birds brand into another realm.

Jason Sudeikis voices Red, a bushy-browed, soccer-ball-shaped bird, who apparently has anger issues. If being irritated by the cloying over-friendliness of all the other birds on the island means “anger issues” then we all need therapy. Sent to an Anger Management class, he meets Chuck (Josh Gad), who is basically The Flash, Bomb (Danny McBride), who can’t control blowing himself up – literally, and Terence (Sean Penn, who grunts a couple times to warrant having his name credited for marquee strength). (With Chuck’s speed, there is a nice parody of the Quicksilver scene from X-MEN: DAYS OF FUTURE PAST.)

When a group of green piggies arrive on a ship bearing gifts (a trampoline, a giant slingshot), Red and his mates are the only ones suspicious of the piggies’ motives. Not least because none of the birds know what a “pig” is. The pigs proceed to lull the birds into a false sense of serenity with their parties and huge green asses, while surreptitiously stealing all their eggs.

Red, Chuck and Bomb trek up the forbidden mountain seeking the help of the mythical Mighty Eagle (voiced by Peter Dinklage), who used to be protector of the island, but has vanished into legend – only to find Mighty is out of shape, out of his mind, and self-delusional. Yet he still fulfills the role of the, uh, Eagles, in LORD OF THE RINGS, as he is the only bird who can fly and therefore appears out of nowhere to save Frodo’s ass at the last minute.

The pigs abscond with all the Birds’ eggs, to Piggy Island (which is littered with sight gags like The Hog Wash, The Piggy Bank, Kevin Bacon as Hamlet, etc.). This naturally makes the birds very angry, so they build a boat and give chase, then use their giant slingshot to angrily launch themselves at the pigs’ domiciles and topple them. The game, the movie, the cartoon, full circle.

Interesting to note that Red’s pep talk to the birds includes a reference to them being “descended from dinosaurs,” so they should be ferocious in their revenge. That’s a line that is taken for granted, whereas 80 years ago it would have been sacrilege to paleontologists. (It also means they have Darwinian understanding of evolution – yet none of them have heard of “pigs”!)

Other voices used for marquee purposes include Maya Rudolph, Bill Hader (as Leonard the Pig King), Keegan-Michael Key, Kate McKinnon and Hannibal Buress. Are there any metrics to prove that this tactic does not move the profit needle? It’s become standard fare to hire ACTORS instead of VOICE ACTORS for animated features; though all these actors are fine, they should stick to live action and not take the jobs of talented voice actors that have made their bones at their professions for decades. That always makes me angry.