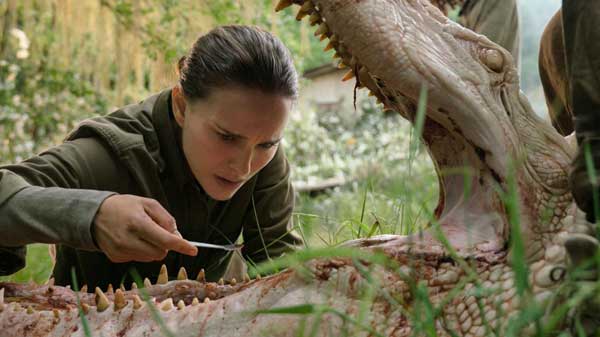 And for my next trick…

Invasion of the fittest.

A military biologist treks to an extra-terrestrial landing site, and discovers that one life form’s expansion means another life form’s annihilation.

ANNIHILATION is about nothing less than the dissolution of the human species. I love it already. An extra-terrestrial species insidiously “invades” our planet, not via rockets and lasers, but through DNA, mimicking and overrunning every carbon-based life form that comes in contact with its cellular Armageddon.

Lena (Natalie Portman) joins a secret military expedition after her MIA military husband Kane (Oscar Isaac) unexpectedly returns from that same mission not quite himself; disoriented, spitting blood, eventually slipping into a coma.

With a cadre of female soldiers (including Tessa Thompson, Tuva Novotny and Gina Rodriguez), Lena warily enters the “Shimmer,” an expanding atmospheric anomaly rendered as a colorful special effect like oil on water – at its heart, a downed alien craft crash-landed in a lighthouse, that is warping reality to its own ends. Commanding officer Dr. Ventress (Jennifer Jason Leigh) warned Lena that over scores of missions, nothing came back from the Shimmer, not drones, not animals, not people… Except Lena’s husband just did. Or did he?

(The Shimmer’s ravenous appetite begs the question: Did you try tether lines on the things you sent in? Did you try sending them in just a short way and then dragging them back out? And if you sent them deep into the Shimmer and they never returned, isn’t it the definition of insanity to keep doing the same thing over and over and expecting a different result? Tethering. Try it sometime, Military.)

Shades of John Carpenter’s THE THING and INVASION OF THE BODY SNATCHERS, ANNIHILATION is a Lovecraftian psychological thriller that asks us to do what most American movies stopped doing after social media was invented – think.

Movie is framed as a flashback, with Lena in a containment room being interrogated by someone in a hazmat suit (Benedict Wong), as she recalls snatches of her encounter with the Shimmer – how she was inside for months and thought it was days, not remembering eating, not understanding how all the members of her expedition are lost… Each of them, in various backstories, was a bundle of neuroses, so might have had a death wish for volunteering for this probable “suicide” mission (yes, but not if you use tethers!), yet movie is not about each soldier’s growth and redemption; rather, the gradual reveal of the Shimmer’s grand purpose is the compelling, thought-provoking hook. ANNIHILATION tells us coldly at the outset this is not about humans at all. 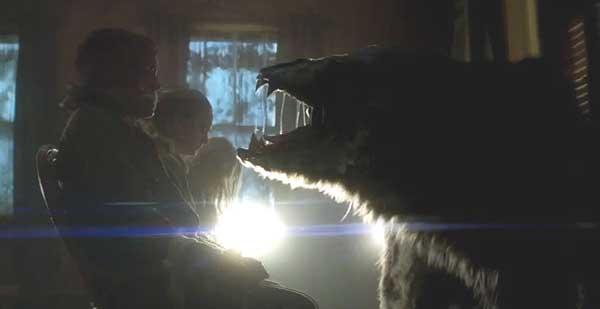 To entertain the troops, the skull-headed bear makes shadow puppets.

The five women slowly lose their minds. They wake after one night and discover they have actually been there three days, due to their remaining rations! After an attack by a mutated alligator, Lena discovers different species traits within one species; plants growing in the shape of humans; a bear with the call of a woman yelling in pain; found footage of Kane’s expedition, cutting into the belly of his fellow soldier and finding snake-like intestines slithering over one another!

Physicist Josie (Thompson) discovers that the Shimmer is “refracting everything” – light and radio signals as well as DNA, taking on the components and characteristics of everything Earth-based, transmogrifying them into extra-terrestrial versions of what the alien intelligence believes everything to be, from sunlight to cells.

From The Southern Reach Trilogy of novels (Annihilation, Authority, Acceptance) by Jeff VanderMeer (2014), writer-director Alex Garland (EX MACHINA) conjures an eeriness that pervades the mysterious journey. For every concept Garland omitted from the novels, he provides a visceral rankling of our senses with disturbing scenes coupled with truly alien sound design by Geoff Barrow and Ben Salisbury, muffled and occluded, stultifying what we believe to be our reality. ANNIHILATION is remarkably original in sights, sounds and concept.

“It’s not destroying. It’s making something new.” When humankind does it, it’s called creation; when something wreaks its creation on us, it’s called annihilation.

Even in this thought-provoking science fiction, there are the little distractions: tentpole actors – I’m thinking of Portman (in such magnificent shape here – side-boob and pearbottom!) being in the STAR WARS Prequel Trilogy, and now, Isaac in the Sequel Trilogy; I’m thinking of both Portman and Wong in the Marvel Cinematic Underpants; thinking of Isaac also in the X-MEN universe… Aren’t there any other actors??

Then there are those infuriating “explanation” scenes, where the listener should already know what the explainer is woman-splaining, yet they do it anyway for the sake of the audience: a military scientist explains to another how to gauge South via the sun. You didn’t learn this in boot camp?

And in an environment where people are losing their memories and compasses are haywire, should Lena really be turning down help to track a fellow soldier on her own? This only serves the plot later, so that the other soldiers can accuse her of killing the woman she was tracking.

And though Lena’s flashback affair might have worked for motivation in the novels, here it seems gratuitous, for titillation only, in side-boob and pearbottom (for which I am not complaining).

ANNIHILATION attempts a revolutionary portrayal of an alien life form. Purely benign, it will be regarded as malign by humans as it terraforms and annihilates what we regard as “our” planet.

As the shimmering entity mirrors Lena’s movements, we feel like we’ve stepped into another, almost comical, movie – Is that the Silver Surfer? – until we realize the disturbing implications of this thought-less entity (i.e. this entity with no conscious thought). The Shimmer is blindly adapting to its environment, its cells much better attuned to malleability than Earth DNA (which mutates over generations), and “mutating” in real time. Dr. Ventress laments the Shimmer is “annihilating” Earth life forms at a cellular level, when in reality it is developing its own life forms to suit Earth’s environment. And Earth’s life – in Darwinian desperation – is losing the battle for survival of the fittest. We marvel at the being that molds itself like silver clay to Lena’s body shape, yet we are so used to extra-terrestrials consciously seeking to destroy that we must remind ourselves this extra-terrestrial has no rational thought and is rather forming innocuously like any conglomeration of cells might form to shape a fish or lizard – in this instance, a human. As the cells mimic the host, they also mimic the human host’s brain patterns, which are basically electrical impulses. While the soundtrack blares basso tones that sound like a woofer speaker disintegrating. 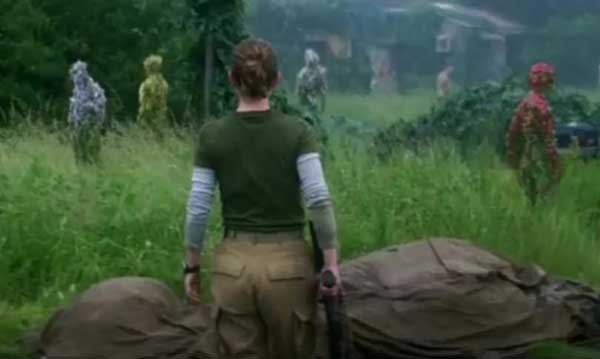 As Natalie Portman gazes at the plant-shaped humans, we cannot believe how amazingly perfect those pear shapes are…

The existential question drives us to insignificance: Are humans simply the sum of our memories (also posited in OBLIVION), or can we transfer our consciousness, which is merely electrical impulses, to other entities (also posited in TRANSCENDENCE and CHAPPIE)? If another life form can mimic our DNA and therefore our thoughts and memories so succinctly, can it be called… human?

What I love about ANNIHILATION is that it never trips up on that tired, narcissistic qualification that humans cannot be replaced by any other life form because they have ‘souls,’ or that humans are “warlike – but noble – so deserve to survive.” The final embrace by shiny-eyed Natalie and shiny-eyed Oscar means that there is yet hope that humans will be wiped out…

In the end, ANNIHILATION bows to the convention of ‘destroy the source – destroy its creations’ because in this modern society, a story that leaves alien structures on Earth spells sequel, and movie wants to powerfully say that no alien intelligence, however powerful, can successfully recreate Natalie Portman’s side-boob and pearbottom.