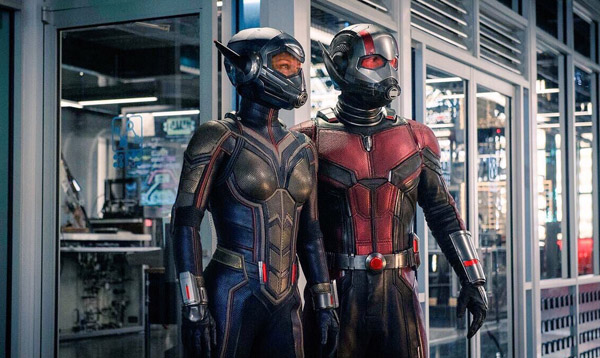 ANT-MAN AND THE WASP cops out on its grandest concept – the quantum realm!

In ANT-MAN (2015), Dr. Hank Pym warned Ant-Man not to turn off his regulator, for fear of shrinking too small and entering the Quantum Realm, “…where all concepts of time and space become irrelevant as you shrink for all eternity.” The key phrase – the most disturbing caveat that plants a tomb-like horror in our breast – is “shrink for all eternity.” Shrinking smaller than a wave of sound or a photon of light (meaning you end up in silent darkness), smaller than an electrical impulse (meaning your brain can’t function); and in that vegetative, sensory-deprived state, you continue to shrink…

That was the fate of Hank’s wife, Janet. The quantum realm was a device so powerful it underpinned the climax of ANT-MAN, and is now resurrected in ANT-MAN AND THE WASP, as Hank suspects Janet “might still be alive down there” and plans a rescue mission to retrieve her… 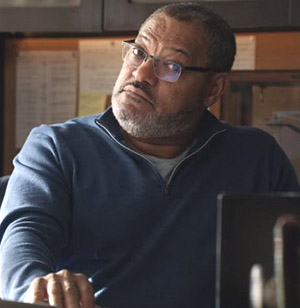 No Laurence, we can’t just take the blue pill to leave the quantum realm.

And when he gets there… oh, it seems concepts of space and time are not irrelevant at all, but pretty much the same as the normal-sized world, and Janet is NOT shrinking for all eternity – she’s chillin’ at Hank’s tiny size when he arrives in his chariot, with no further shrinkage. (How would Hank have caught her with a 30-year head start on shrinking anyway?). Not only that, Janet has aged quite normally, and looks pretty darn good for someone who should be hallucinating or brain-dead from decades of sensory deprivation (and no food!). Oh, and she’s got super powers now – did we mention that? – where she can transfer energy by touching people… Quantum realm. Yeh, sorry to have made such a big deal; turns out it’s just a place, like Jersey or something….

You spineless goons, Marvel! Stick to your own rules! Hank specifically stated: “shrink for all eternity,” meaning continuing to shrink until death! When Hank told his flashback story of the Wasp “shrinking through the molecules” to stop the missile, I remarked I wanted to see THAT movie. Why? Because the stakes were so high! This movie even opens with that scene, because it’s so powerful and emotional! However, by arranging this shrinkable ferry service to and from the QR, retconning it into a bad day in the Fashion District, Marvel has undermined all the emotions of that last movie and negated the stakes in this movie, homogenizing it and selling it to us as Intense Crisis. Thus, ANT/WASP has to become a chase movie to coax any excitement at all from the QR device which, just last movie, was a disturbing fatality.

That’s not the only problem: there’s this “Ghost” hanging around that the screenwriters are trying to insert sideways into the plot as a villain – until they just give up.

If you don’t care for consistency and a story reneging on its own plot points, then you can enjoy ANT-MAN AND THE WASP in the thrall of ignorance; great effects and kinetic action sequences make it a fun diversion. Just don’t expect any tension or even any connection with the characters, as the movie is a constant cop out on all fronts. 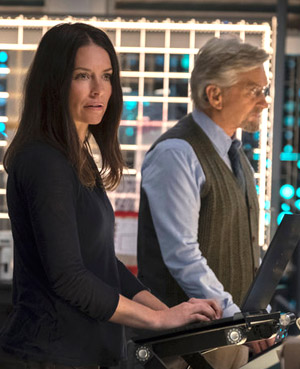 I’ll see your Action Girl Hairstyle, and raise you an Action Man Vest!

ANT/WASP is a sequel to 2015’s ANT-MAN (both directed by Peyton Reed), and a “soft-sequel” to 2016’s CAPTAIN AMERICA: CIVIL WAR. We know this because the characters keep alluding to CIVIL with winks to the fanboys. All the principals return, with Michael Douglas as Hank Pym, berating Ant-Man for going off to fight Avengers (wink); Paul Rudd as Ant-Man/Scott Lang, now under house arrest for contravening the Sokovia Accords (wink); Evangeline Lilly as Hank’s daughter Hope, debuting as the superhero Wasp, outfitted with a suit that can shrink, fly, and has frickin’ laser beams attached to its head. Scott is jealous of her thigh-jitsu expertise and she’s jealous that Scott went to Russia without her (wink) – okay, Enough, you guys! We get it! You’re in the MCU! (Marvel Cinematic Underpants.)

Did we mention that Hank’s wife Janet, though trapped in the quantum realm, can also possess Scott’s body for comedy purposes? Well, she can. Because – Quantum Realm!

The plot is somewhat less than world-girdling: Hank and Hope want Janet back, and Scott enters the equation because Janet is in his dreams. (Now that’s science.) Is any of this important to the world stage? Nope. To stay under the radar, Hank occasionally shrinks his warehouse lab to the size of a suitcase-cube and moves its location; also owning a fleet of shrunken cars to stay incognito. Is any of this necessary if no one’s looking that hard for you? The FBI skulk around the periphery, as they need to ensure Scott stays home with his ankle bracelet; led by clownish Agent Woo (Randall Park – Kim Jong-Un in THE INTERVIEW), who provides THE clunkiest, cringiest, most obvious exposition ever committed to analog and/or digital film in the history of movies; the only thing missing is a title card saying, “This is the backstory from 3 previous films, for newcomers to the Marvel Cinematic Underpants.” And what are the high-stakes repercussions of Scott breaching his house arrest? Well, another court date for sure… 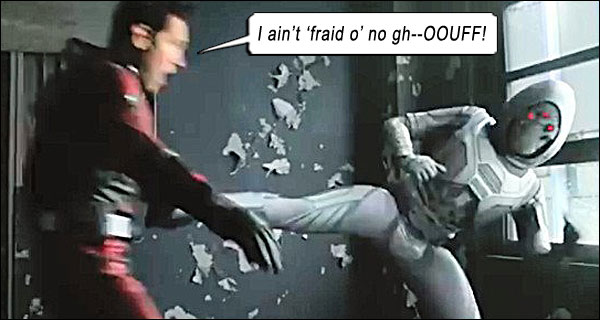 Then there’s Ghost (Hannah John-Kamen) who is sold as a supervillain, but she’s just an unfortunate woman suffering from Special-Effects-itis, who needs Hank’s lab to cure her. Aided by Bill Foster (Laurence Fishburne, who speaks of the “Goliath project” – fanboy cool!), Ghost and Hank desire the same thing – the return of Janet, so why is Ghost fighting against Hank? (Also kids, now that Laurence Fishburne is in the MCU, along with Samuel L. Jackson, you can confuse them more often!) I do like the way Foster is not a sneering bad guy, but a man who doesn’t want to save somebody at the expense of someone else. Ghost, being near death and more desperate, threatens to crush kill destroy anyone anything in her way. And doesn’t. Because PG-13.

Floating amidst this no-stakes circus are Walton Goggins as a black market dealer, Judy Greer and Bobby Cannavale who have literally nothing to do, and the three wombats on Scott’s crew, Michael Pena, David Dastmalchian and T.I., Pena finding his fast-talking stride as the film’s true comic relief, while the other two take up screentime that could’ve been used for showing more Wasp pearbottom.

Abby Ryder Fortson returns as Scott’s daughter, so comfortable and poignant in front of the camera, it looks like she and Rudd are really related.

Hank Pym gets his OG Ant-Man suit on! And rescues Janet (Michelle Pfeiffer) from the quantum cop out realm. And Marvel adds to that cop out with another… this time with moral choices: Ghost’s life is fading due to her uncontrollable phasing like a Jimi Hendrix video, and it is proposed that Janet’s quantum energy (whatever that is) can save her. Here was a moment where the characters might have been asked to CHOOSE between Janet and Ghost: there might have been only enough energy for one of them to live – who would it be??!! Think of the conundrums and tears and sacrifice that plot point might have stirred! Nope. Janet just touches Ghost with her super powers and – CURED! But how?? It’s magic who cares fuck you.

There is literally NO EFFORT expended in this wrap-up. Because the filmmakers are drooling just waiting to get to the shocking post-credits scene that shows us just how damn much this movie is connected to INFINITY WAR! See how our Marvel movies are all connected? Do you see? DO YOU SEE? Oh, touch myself savagely! 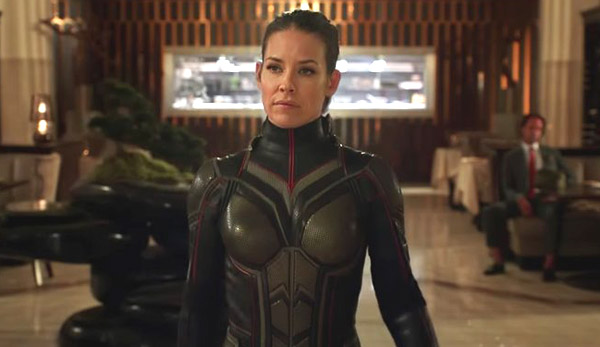 I need to rub my face on that suit! For science.

Ant-Man’s and Wasp’s masks are now CGI, just like the magic masks for Iron Man or Black Panther, which swiftly disappear, then reappear whenever they need to. I actually like the fact the filmmakers made their masks cover the whole face (unlike the comics suits), because it makes sense that if the suit is responsible for your sizing, then it should cover all your atoms. Yet Ant-Man and Wasp regularly remove their masks at any size. Which means even that element is a cop out. Why use masks at all if you’re gonna go against the rules of what the masks are for? 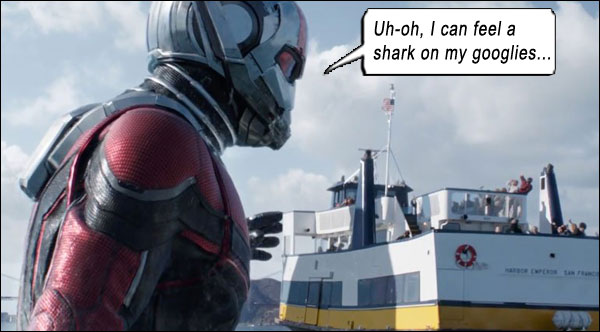 Hank’s shrinking lab and his satchel of shrunken cars both contravene the very rules that this supposed science fiction movie sets for itself: that when something gets tiny, it still retains its mass… Meaning that Hank is wheeling around a ten-storey building which should still weigh as much as a ten-storey building, and has a bag of 20 cars that should weigh as much as 20 cars. Thus, when Scott goes Giant Man, retaining his same mass would mean he cannot hold back a truck, or manipulate it like a skateboard – because he’s only 180 pounds.

By the time Scott is growing bigger than a ferry and skateboarding trucks, the writers (including Paul Rudd) are paying even less attention than the audience. Oh, is that why Evangeline Lilly looks so tight in that suit?