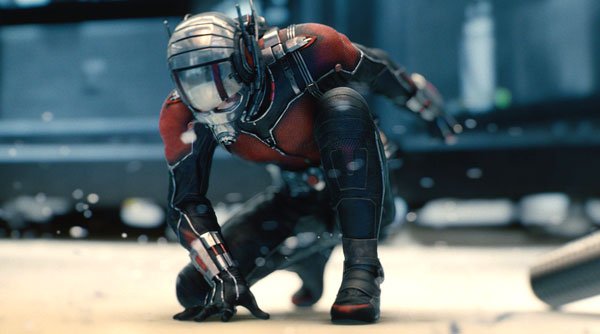 When you’re this tiny, is it really necessary to distribute your weight in the prescribed Superhero Pose?

Ants with frickin’ laser beams attached to their heads!

Who woulda thought OUR IDIOT BROTHER would become a superhero? Paul Rudd is the eminently likable yet totally miscast lead in Marvel’s ANT-MAN, a movie with excitement as small as its titular hero.

Master electrician and not-so-master burglar Scott Lang (Rudd) is recruited by reputable scientist Hank Pym (Michael Douglas) to become the Ant-Man, and steal a super-suit from competing scientist Darren Cross (Corey Stoll), who wants to sell the technology to the highest bidder, and is turning into a cartoon villain right before our eyes. We can see the mustache growing on him, just so he can twirl it and laugh like “Bwohahahaaaaa!” (I love Corey Stoll as an actor, but this one’s a phone-in!)

Cross has not yet perfected his shrinking tech, so to indicate how eeevil he is becoming, he brings in a lamb as a test subject. Someone protests, citing mice as the regular subjects. Cross replies callously, “What’s the difference?” Well, upkeep for one. It looks like you’ve got an inexhaustible supply of lambs back there. Where are you housing them? Feeding them? Recycling their poop? etc. Now consider mice… you get the point. Next – the experiment fails, the “shrinking ray” reducing the lamb to goop. Without one second to check the mix of chemicals, or to consider a different approach, etc., Cross yells to “Bring in the next subject!” Dude, that’s not science – that’s just killing lambs for pleasure. See? Eeevil.

Considered one of the “better Marvel films” (because Marvel says it is), ANT-MAN is so rife with plot contrivances it rides a unicorn into a cliché carnival by the time one ant-man is shooting at another ant-man with frickin’ laser beams attached to his head.

Since when did this effects-ridden pupillary-myocardial-infarction become the yardstick for good filmmaking?

ANT-MAN opens in 1989, with a young Hank Pym arguing with members of his company about revealing the secret of his shrinking technology, called the Pym Particle, “As long as I’m alive no one will get that formula!” (As any comics fan who grew up in the Silver Age knows, Pym is the original and best Ant-Man, who would also become Giant-Man, Goliath and Yellowjacket – but this film opts to sweep all canon off the table and invent a new origin for Scott Lang, the second Ant-Man.) Michael Douglas is YOUNG in these scenes – digitally de-aged to his IN-LAWS period – and his whole face looks like Henry Cavill’s mustache.

John Slattery is Howard Stark in these 1989 scenes, for the Iron Man tie-in (later, Pym will have juicy words of contempt for the “tin suit,” lauding his own Ant-Man suit as superior technology). And Hayley Atwell is Peggy Carter in “aged” makeup, for the Captain America tie-in. Later, Ant-Man will trade girl-slaps with Falcon (Anthony Mackie), Cap’s bottom bitch, in the most obvious shoehorning of a scene ever in cinema, as Ant-Man must get some McGuffin from Avengers HQ, and The Cheapest Avenger flies in as a day-player, speaking on a comm to someone offscreen whom the filmmakers couldn’t afford, with the express purpose of linking ANT-MAN to the MCU (Marvel Cinematic Underpants).

Present Day, and Scott Lang is getting out of jail, taken in by his former burglar buddies, yet vowing never to burgle again for the sake of his daughter. Marvel would like you to think: Oh, family man – Good Guy then. His three accomplices (Michael Pena – who replaced Luis Guzman as the Quirky Mexican Guy in movies – Dave Dastmalchian and T.I.) are written so poorly that the filmmakers don’t know whether to make them incompetent comedy relief or actual Ocean’s Eleven pinups. There is only one gag that really works – when they drive their heist van straight into the midst of parked cop cars and Pena orders offhandedly, as Dastmalchian inches backward casually, “Just back up… juuust back it up… baaack it up…”

We meet Hank’s daughter, Hope (Evangeline Lilly, one of the most desirable women on Earth; here, victim to a godawful “business” hairstyle – Bryce Dallas Howard suffered the same ‘do in JURASSIC WORLD), who harangues Hank to allow her to use the Ant-Man suit herself to pull off the heist (as they all look at the Death Star blueprints for some reason), demonstrating she knows the tech intimately by making Hank’s ants perform complicated tasks. We the audience also wish she would just put on the suit, because, being designed for a man, it would stretch quite achingly across her straining breasts.

Later, Scott gives Hope – who believes Pym is disrespecting her – a poignant reason why Pym wants inept Scott on the mission instead of her: because he’s expendable. Proving how much Pym loves Hope. Surprisingly deep for an ant movie.

Scott’s ex-wife is the lovely Judy Greer (now that’s a sexy hairstyle!), now married to mourning-faced creature Bobby Cannavale, a cop that has a hard-on for Scott. And Scott’s daughter, Abby Ryder Fortson, is a talented young actor who is funny and cute without being annoying – a hard task in a Marvel tentpole movie. 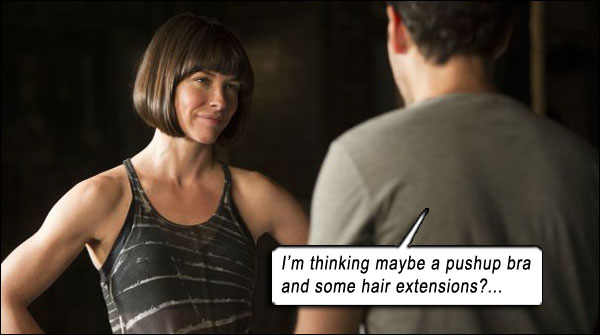 There is one momentous idea in ANT-MAN that outweighs all the big-things special effects or heist conundrums, or the all-too-predictable training montage: Hank Pym tells of his days as the original Ant-Man (hooray!), with his wife Janet by his side, the original Wasp (sexycool!). During a flashback mission, she sacrifices herself for a city, by deactivating her “regulator” to “shrink between the molecules” to get inside a missile and halt its flight, thereby “going subatomic, entering a quantum realm where you shrink for all eternity, where everything you know and love will be gone forever…”

I wanna see THAT movie! The implications are simply horrifying. Shrinking constantly! When you shrink smaller than a wave of sound, you will be in utter silence; smaller than a photon of light, you will be in complete black. At what point does your brain become too small for electrical impulses to fire? You become a vegetable as you shrink ever further, not even counting that you went insane from the isolation and sensory deprivation long before you reached that point… Janet’s sacrifice and its morbid consequences are a foreshadowing that Ant-Man will face this ultimate conundrum…

And face it he does; a sacrifice for the sake of his daughter that disturbs us to the very core of our jaded souls…

Directed by Peyton Reed (YES MAN, 2008) and written by Joe Cornish and Adam McKay (with Paul Rudd co-writing), the filmmakers try to explain everything about the ant biz and – like all superhero movies – explain nothing.

How does Pym control the ants? He “uses electromagnetic waves to stimulate their olfactory nerve center.” Okay, that’s their SMELL CENTER. You writers know that, right?
The Pym Particle: “I learned how to change the distance between atoms.” I guess when Ant-Man first appeared in 1962 (created by Stan Lee, Larry Lieber and Jack Kirby), they didn’t know that atoms could be compressed far smaller than the size of an ant.
Ant-Man retaining his mass when tiny makes it possible to still punch a guy with full force. So… when Ant-Man runs along the barrel of a gun, is the guy holding the gun also holding up the mass of a 180-pound man as well? And if objects retain their mass, how is Pym carrying around that 30-ton shrunken tank on his keychain?…

I get it: they’re using Paul Rudd’s charm offensive to distract us. The same guy who was slappen-de-bass in I LOVE YOU, MAN now has the three-day-growth to prove he’s a hard guy. And he’s gotten so ripped for the role that Evangeline eye-rapes him. 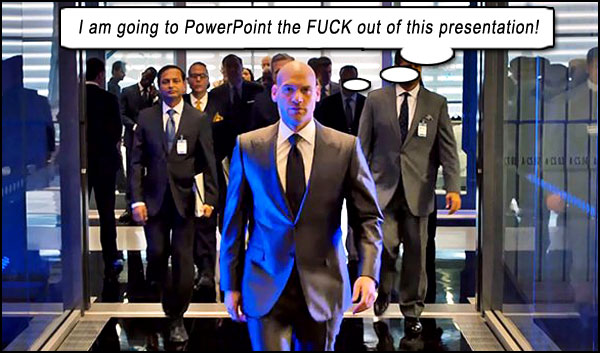 After things get big and small a lot, and Ant-Man uses armies of ants to do his bidding (including riding a flying ant that he dubs Ant-thony), he fails to steal the super-suit, which Darren Cross dons to become – the villain Yellowjacket. Yes, fanboys, the character has gone way beyond Hank Pym donning the duds as a superhero, and landed somewhere in the dopey Disney future, where Yellowjacket now has a face like Venom and four “waldoes” sprouting from his back (like Iron Spider), that shoot frickin’ laser beams. Obviously trained by stormtroopers, Yellowjacket can hit anything EXCEPT Ant-Man as he blasts arbitrarily in all directions. And by the way, remember how Scott had to do that training montage just to be able to “run big, dive through the keyhole small, and emerge big”? Cross can do absolutely anything as soon as he puts on the Yellowjacket suit! How is he so proficient at it? Has someone been doing a little cosplay every evening in front of the mirror?

Cross shoots a bullet at Ant-Man riding Ant-thony – and we see a solitary ant-wing float down… What? Nooo! It’s almost as sad as the Death Of Wilson… Ant-thony can’t be dead, can he? I mean, how does a full-sized bullet even hit an ant? Preceding air pressure should push the insect out of the way, no? Ah, physics. Use it when you need to sound smart, then don’t use it when you don’t feel like it. It’s magic who cares fuck you.

To save his daughter from Yellowjacket, Ant-Man must disable Yellowjacket’s suit by “shrinking between the molecules” to get inside it. Thus, the best moment in ANT-MAN arrives when Scott Lang must sacrifice himself in that same disturbing manner foreshadowed throughout the movie – go subatomic. One powerful moment amidst a raging sea of stupidity, portrayed ominously, with special effects being used for their intended purpose, lending startling visuals to the ultra-microscopic world as Scott shrinks… shrinks… shrinks…

So, wait – is Ant-thony really dead? I told them you shoulda had frickin’ laser beams attached to your head! 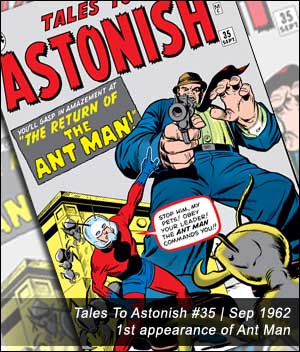