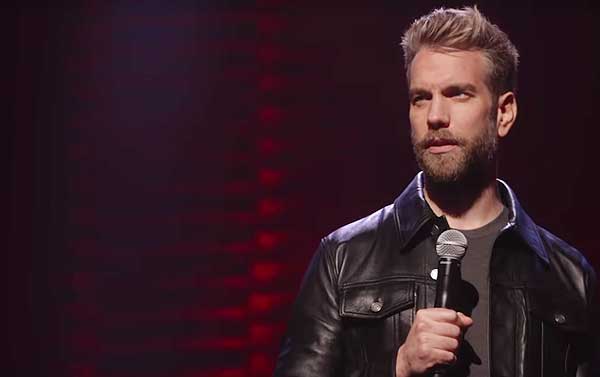 Dropping a baby – that’s just what he does. According to Anthony Jeselnik, he’s “never held a baby… to completion.”

Media itself has become so scattershot and disparate these days that it could come at the public in any form as purchasable product. Jeselnik’s first “album” Shakespeare was released digitally in 2010; his second, Caligula (2013), was a physical album that topped the Billboard comedy album chart (#1); his third, THOUGHTS AND PRAYERS, was a 2015 Netflix Standup. I guess as long as you can Sit Back And Let The Cash Roll In…

Blond, bearded, bright-eyed, Jeselnik once again regales us with his observational humor, but unlike any observational humor we’ve ever heard or seen before. Crossing close to Steven Wright (except filthy as fuck) and in the same vein as Jerry Seinfeld, except without the pantywaisted punchlines, rather a knife-twist to the guts.

Most of the time, Jeselnik is jumping from topic to topic, with sternum-punch stingers that leave us breathless for their amoral audacity. Polar opposite to Chris Rock in style, who used to pace like a panther, Jeselnik does a casual slow-motion stroll around stage, which perfectly suits his arrogant, self-aggrandizing style.

Longer bits include: a neighbor with Alzheimer’s, the baby-dropping bit, the benefits of murder-suicide, taking a friend to get an abortion… And ‘longer’ does not mean boring or less intense by any means; it means the bits have 20 more words than the gut-punch jokes.

In this gutless pc SJW cancel culture, Anthony Jeselnik is the hero Gotham needs, the slow poison through the IV drip that we deserve.