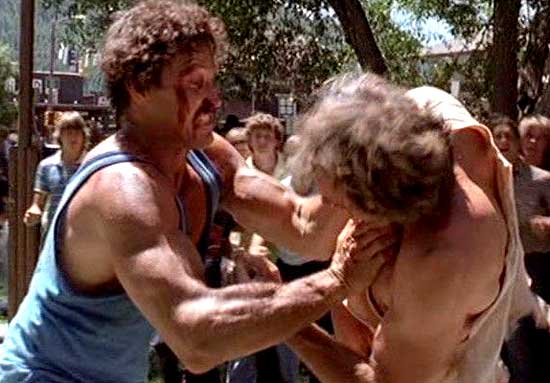 ANY WHICH WAY is a “Right Turn, Clyde!”

“Right turn, Clyde!” – and the orangutan’s fist shoots out the passenger window, impacting anyone dumb enough to have their face there. It’s just one of many running gags in this inexplicable, fuzzy film.

ANY WHICH WAY YOU CAN (sequel to EVERY WHICH WAY BUT LOOSE) opens with an illegal street fight, pitting bareknuckle street machine Philo Beddoe (Clint Eastwood) – now a local legend – against a Marine-beating bent cop, cheered on by a rowdy mix of truckers, crooked cops and busty chickie babes.

While Philo ogles some jiggling boob, the cop catches him unawares. Before he rises from the sand, Philo gives his opponent a menacing look – that tilted head with one eye slightly squinting… All I know in this world is: you don’t wanna be on the receiving end of the Clint Glare. Ever. In short measure, the cop goes down. Meanwhile, Philo’s orangutan, Clyde, has crapped in one of the squad cars…

ANY WHICH WAY YOU CAN, written by Jeremy Joe Kronsberg and Stanford Sherman, and directed by stuntman extraordinaire, Buddy Van Horn, is one of those rare movies that takes everything good about its predecessor and mashes it up in a big bowl of wrong that tastes just right. 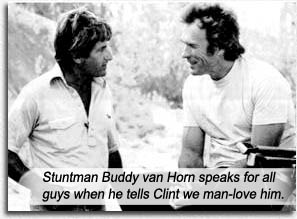 Philo is still trying to make ends meet in Anytown San Fernando Valley by rebuilding engines and bareknuckle boxing. A $10,000 underworld match comes his way, against a man-mountain renowned for maiming and killing his opponents, Jack Wilson (William Smith). Philo and Wilson meet unofficially in a – what else? – barroom brawl, eventually befriending each other enough to cancel their bout and anger all the underworld figures who organized the betting stakes. They end up fighting unofficially, the fight growing in intensity and public attention until the whole betting populace of the small town is cheering them on.

With both men pushing 50, we wonder how this plot could even be plausible, yet through a blend of laconic humor and outlandishness, ANY WHICH WAY makes it believable, with a wham-bam-thank-you-ham third act that makes you want to do 100 pushups and situps a day, just to look half as good as these veteran, iron-thewed warriors when you’re pushing half a century.

One of the reasons this movie works is the palpable camaraderie on set – even between Clint and his “enemies.” They’ve all worked with him before, in a cavalcade of past Clint classics: John Quade (in HIGH PLAINS DRIFTER) along with his Black Widow gang of Clint regulars, Dan Vadis (BRONCO BILLY), William O’Connell (JOSEY WALES), Bill McKinney (THE GAUNTLET); underworld bookie Beekman is Harry Guardino (last seen chewing out DIRTY HARRY); there’s the team from EVERY WHICH WAY, Ruth Gordon once again steaming the screen as trash-talking Ma, Geoffrey Lewis as ever-faithful Orville, Sondra Locke still skeletal and untalented as Philo’s girl, Lynn Halsey-Taylor (in this sequel, she reconciles with Philo and is painted as more breezy and charming); and then there is Clyde the orangutan, always in the background, yet somehow in the furry foreground whenever a punch or a raspberry is needed to punctuate the action. The luminous Beverly D’Angelo is sorely missed (as Orville’s girl).

There’s nothing deep here; crack a beer, strip down to your wife-beater and just enjoy it. Every which way you look at it, ANY WHICH WAY is a Right Turn, Clyde.