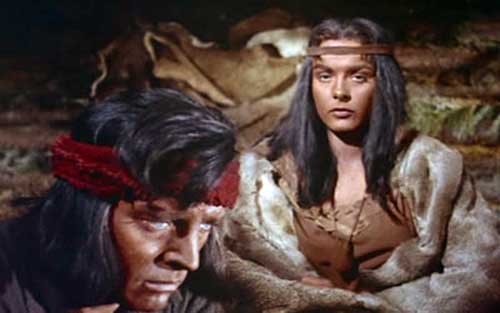 APACHE: yet another grandiose insult to the Native American people, pretending in its own racist way to be a tribute.

To watch the original trailer for APACHE, one would think it is about Apache Massai (Burt Lancaster) waging war on the White Eyes against their snide peace treaties to the Native Americans. It fails to mention how White Eyes are the writers of this slanted tale and that Massai eventually falls under the spell of the FANTASTICALLY FAIR AND HONEST White Eyes’ terms. The insult goes unnoticed, because the audience for this travesty is… White Eyes; descendants of Europeans who call themselves “Americans.” No actual Apaches were expected to watch the movie or protest its craven mendacity, and the insult is touted as tribute. By who? The White Eyes, of course.

Nowadays, most modern Americans are aware of the inhuman mistreatment of Native Americans during the European invasion, but back in this movie’s heyday, the majority of bigoted unsophisticates truly believed that this swill was an honorable representation of a noble race. How do I know this without taking any surveys or living through that era? Because this dungheap of a movie EXISTS. 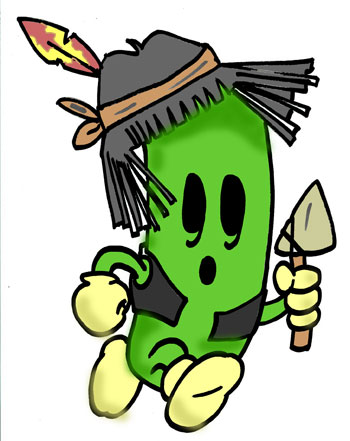 There is such a thing as “willing suspension of disbelief” and it is splashed around the movie milieu like mud on pigs – because it needs to be. If it weren’t for this imperative facility, we would never buy the innumerable stupidities the fun-makers throw at us: sound in space, life after death, pets smarter than people, faster-than-light travel, teens investigating pitch-black basements without flashlights…. But director Robert Aldrich‘s APACHE seems intent on trying to subvert that suspension from all angles.

To cast the uber-red-white-n-blue cowboy Burt Lancaster, splotchily body-painted as Apache Massai, egregiously pushes the “suspension of disbelief” envelope way past “racist” and “ignorant” and somewhere into the region of parallel universe. Furthering the surrealism, petite-featured Jean Peters is his blue-eyed Apache Woman (both of them sporting chic Valley Girl Headbands to hold their deplorable jet-black, synthetic-hair wigs in place); both abjectly avoiding any semblance of Apache mannerism or speech inflection (except, of course, for that precious “educated savage” idiosyncrasy of referring to themselves in the third person). To cap it all, Lancaster’s every phrase and action that of a theatrical acting student performing Native-American-Warrior-by-way-of-Julliard, rather than that of battle-worn, open-sky-raised Apache. Let’s not even mention the Central Casting “Generic Indian” extras, who were all Mexican, Spanish and White (“Yeh, Doris – just throw some breechclouts, beads and feathers on ’em, will ya.”). A viewer from an alien culture would never be able to apprehend why the marauding Europeans would want to massacre indigenous American peoples who looked and spoke and behaved and were culturally exactly like them!

As Mario Van Peebles notes in his incendiary BAADASSSSS! (2005), “…and any white actor could play us – get yourself a feather or a turban – who said that was okay?…”

Even Massai’s motivation was so milky-white, you could healthily breast-feed your baby with it. Under the racial cleansing of the Native American peoples in the late 1800s, Massai’s aspirations were not to “challenge” the Amerikan Military over rightful claim to The Land, but rather, to assimilate into the white community by GROWING CORN alongside his oppressors and raising kids in that enslaved environment. Certain Native American groups were farmers, through their own volition – but Massai implies that in his travels, he encountered a Cherokee group whose truce with their resident Whites was brought about by “learning” how to sow corn. In essence, if you sycophant yourself and husband the land, the White Eyes will “let you live.”

And the White Slant of the movie portrays sowing a meager, rock-strewn plot of land with a Playboy model the noblest thing an Apache could do; a far cry from the existential battle against the United States military for the soul of America. In the most unrealistic turn of an altogether unrealistic movie, as Massai battles inept soldiers trying to gun him down in the final scene, all animosity is quelled when the soldiers realize that he has staked roots in this here land of theirs by growing corn and siring a child – and they leave him be!

And I thought Disney Corp was the most dangerous of all insidious liars.

How could anyone believe the canard that the Amerikan Military would grant respect to a people they were inculcated to believe were alien – soul-less, god-less, without rights, and deserving of death at His Most Righ-chuss Hand – and that it was their moral right to massacre them?

Simply put: even though he had cowed to the Amerikan Way, the military would not have left Massai to live in peace in his newly created outer ‘burb of White-Man-Ville. The Amerikan Military was not out to “convert” Native Americans; it was a much simpler plan – GENOCIDE. Massai would have been expediently killed, his cornfield torched, his postpartum wife raped and his newborn disposed of in a manner unfit to describe to children.

At this juncture in its spotty history, Amerika is quite self-aware of its many atrocities towards the numerous indigenous tribes of nomads whom they couldn’t tell apart through ignorance. We know that the fledgling Amerikan government did not honor one single treaty that it signed with any Native American; we know of Custer’s men using the heads of Native American children as soccer balls; we know the military encampments were inculcated to regard these noble peoples as “devils in human shape.” Being subjected to this honeycoated fiasco portraying one “proud warrior” learning to live peaceably amongst his subjugators by ignominiously succumbing to White Culture, should put Native Americans on the warpath. (Even the oversimplified title, APACHE – a term applied to a number of Southwestern Athapascan Native American groups – is as inelegant as titling a film WHITE MAN, be it about a Canadian, European or Australian.)

The audience is cajoled into believing that the filmmakers’ sympathies lie with the Native Americans, as the “star” is (supposedly) portraying an Apache. But why isn’t the star an actual Apache? Or any tribe of NATIVE AMERICAN? (We even meet a young Charles Bronson playing a Native American – someone infinitely more visually correct for the leading role, but not as big a star as Lancaster.) Lancaster is cast for the venal purpose of selling tickets and advertising with a known commodity. And his laughably inauthentic “Indian” has nothing to do with paying tribute to a noble race, but has everything to do with generating revenue.

If it weren’t for the sidetrack of CORN-GROWING LIKE A GOOD REDSKIN NIGGER, maybe this movie’s subtext might have shone through – that the Native Americans were always fighting for the two causes which Amerikans hold most dear as their god-given rights – their homeland and their freedom.

Stick that in your peace pipe and smoke it!