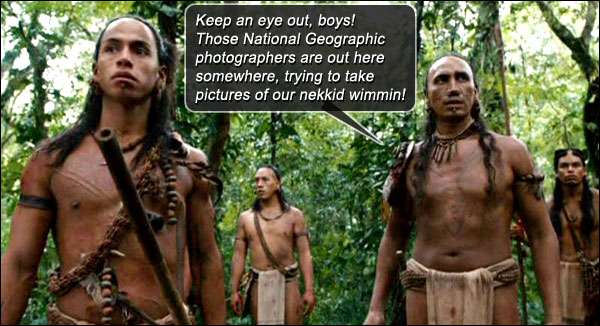 An Epic Fable in a Jugular Vein.

MEL GIBSON’S APOCALYPTO is a bone axe to the cervical vertebrae at the base of the skull; jungle-wild beauty juxtaposed with bestial brutality, exceptionally well-executed.

Though an ominous quote by Will Durant opens the film (“A great civilization is not conquered from without until it has destroyed itself from within”), writer-director Mel Gibson (with co-writer Farhad Safinia) offers no reasons for the fall of the Mayan civilization bleeding for his salacious cameras, instead flying off the axe-handle in another direction entirely, focusing his fable on the gruesome interplay of individual Mayan villagers; his star warrior a Lethal Weapon, his principal antagonists stepping straight from the glistening man-butt highways of Mad Max, and his gleeful bloodletting approaching levels only a hellish Holy Bible could match. 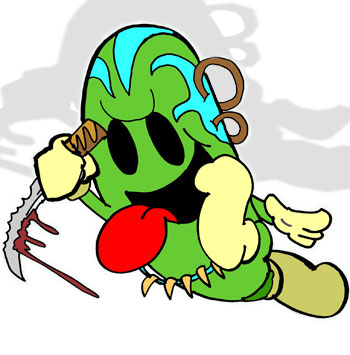 APOCALYPTO opens with a jungle hunt (olive-sinewed Mayan warriors bring down a wild tapir in nothing but bare feet, bone axes and breechclouts, mocking us mollycoddled modern pansies with their bronzed machismo), a practical joke (as they tease a fellow warrior), and a forewarning of evil (a disheveled, fleeing tribe comes upon them, bringing fear in their wake). Gibson’s writing and directorial finesse have never been more evident, this smooth-paced opening jolting with adrenaline, calming with camaraderie and then alarming with portent.

Is the “evil” that of the Spaniards bringing their anointed death in the name of Christ, or the coming of Quetzalcoatl, or the Harmonic Convergences of José Argüelles? Will we learn of Mayan creation – the Popol Vuh – to better understand Mayan destruction?…

No. About the only philosophizing Gibson does is via tribe patriarch, Flint Sky (Morris Birdyellowhead, resembling Russell Means as Chingachgook from LAST OF THE MOHICANS, 1992), who counsels his son, Jaguar Paw (Rudy Youngblood, the Lethal Weapon) on casting out fear from his being.

The Holcane, led by Zero Wolf (the intimidating Raoul Trujillo, whose sincere ferocity conjures another character from MOHICANS – Wes Studi’s Magua) trek their captives to a Mayan city where the women are sold and the men are painted blue in preparation for sacrifice (what is it with Gibson and blue body-paint?). Atop a great step pyramid, the Mayan royalty have attained such a casual attitude toward excessive human sacrifice (to ostensibly stave off a drought) that the royal youngsters watch and yawn as blood-deranged priests carve out the still-beating hearts of young men, lop off their heads and toss bodies and heads down the steps for mothers at the base to anoint their babies with the blood. (Even the flesh-gargling god of the Old Testament might have interjected, “Dudes, dial it down to a 7!”) The high priest proclaims, “We are a people of destiny!” which slaps us into realizing that the ancient Mayan sacrifices were not too different from our current human sacrifices, wherein we offer up our youngest and sturdiest warriors to unnecessary wars under the high priestage of deranged leaders. 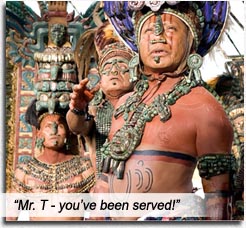 Up to this point, the opening quote was still badgering for relevancy – might the Mayan fall be attributed to this sacrificial attrition? (and might this be a caveat for our own wastrel civilization?) – but upon Jaguar Paw’s escape from decapitation (through luck of a solar eclipse, and ensuing perfunctory carnage) the movie becomes a simplistic, visceral chase sequence, all primeval agility and dynamite man-muscle. Think CHATO’S LAND meets FIRST BLOOD. With a lot more hurting. Jaguar Paw runs to rescue his very pregnant wife and infant son he hid down a well during the Holcane raid; Zero Wolf runs on the diesel of vengeance for his own son, whom Jaguar Paw killed.

And as we watch these sinfully fit, jungle-fevered specimens of manhood sprint full tilt day and night through unforgiving foliage with wounds, in bare feet, with no sustenance, carrying heavy battle weapons, we realize how far into the feminine our “civilization” has shunted Man. As Pacino says in DONNIE BRASCO, “These are men are men.” Millennia before corporations and business suits lost Man his powerful physique; before nutritional supplements and Viagra lost Man his vitality; before the shriking of feminists, bull-dykes and women voters lost Man his will to live, this was what Man was. Vital, virile, violent.

Lauding violence as a favorable trait may seem insurrectional, but it was this very viciousness that raised Man above other wild things. We have become soft – and though it is somewhat sociologically acceptable to cringe at the extent of Gibson’s gratuitous gore, at least admit it was this ferociousness that brought us here today. In that sense, Gibson’s films are cathartic, tapping into our limbic consciousness and squirting us with primeval juices: all three are epics, all three bloodbaths, all three in foreign languages (APOCALYPTO in Yucatecan Maya, PASSION OF THE CHRIST in Aramaic and BRAVEHEART in some kind of Unintelligible Scottish).

APOCALYPTO’s cast so casually perform the Mayan tongue and behave so naturally before the cameras that one would never guess that 99-percent of them have only one major motion picture to their credit – this one.

After the stunning scenes of virginal jungles, pyramid cityscapes, hand-to-hand combat, poignancy of village children tearfully following their captive parents until the river blocks them; after humanizing the Holcanes to show the father-son relationship that engines the Zero Wolf-Jaguar Paw vendetta – we are removed from the moment when one of Zero Wolf’s warriors is killed by a jaguar puppet. The killing fulfills a prophecy: en route to the Mayan city, a young leper girl foretells of the eclipse and of a “man who runs with the jaguar” who will topple the Mayan power structure. Prophecy – one way to ruin a movie which would have done perfectly well without it.

When APOCALYPTO ends abruptly with Jaguar Paw seeing Spaniards in ships coming ashore, we tease out an inkling of relevance for the opening quote. In this age of killing, might Gibson’s ultra-violent film be a warning to killing nations that if they/we are so blinded by interpersonal squabbles and kill our own kind (or let our own kind be killed) so nonchalantly, our society will become so intellectually, physically and morally eroded that a conquering race would easily overcome us from without? The Spaniards were simply hoving to shore, not knowing the state of the peoples they were about to meet. The Mayans, for all their physical fitness, being in such a frenzy of self-mutilation, would eventually succumb to Spanish domination.

Might an Apocalypse (a “lifting of the veil,” a great disaster, a prophetic revelation) be that subtle?

As we speak, another subtle Apocalypse awaits Man – in this age of Oprah and Rosie and The View and Ryan Seacrest and the Lifetime Channel, it will take all Man’s will pitted against the vaginas of emasculation to retain any semblance of evolutionary male power. And APOCALYPTO serves as a thunderous shot of adrenaline to remind us of our warrior past, our masculine legacy, our man-thighed lust.

Someone take a bone axe to women like Britney Spears, Paris Hilton and Ryan Seacrest.