In this minimalist thriller, two American astronauts in 1972 are sent on a secret mission to the Moon in Apollo 18 – to stop the USSR doing something-something-who-cares-McGuffin – and find they are not alone. 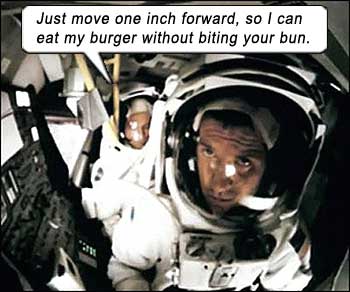 For the youngsters, Apollo17 was the last real manned mission to the Moon. (That’s unless you believe the Moon Landings were at a studio in Burbank. You idiot.)  This “leaked footage” is “the reason why NASA never went back to the Moon.”

Astronauts Ben Anderson (Warren Christie) and Nate Walker (Lloyd Owen) land on the Moon in what seems to be real lunar module footage, brilliantly staged by director Gonzalo López-Gallego and cinematographer José David Montero, an authentic 1970’s Kodachrome tinge to the filmstock. Timur Bekmambetov produces this classic haunted house tale: two actors, one location. For all we know, we are watching actual NASA footage, as over 95% of the visuals are from mounted fisheye cams inside the capsule, helmet cams and hand-cams. There seems to be not one shot that could have originated from a movie camera. An excellent piece of filmmaking, all bad angles, truncated frames and stressed filmstock.

Ben and Nate exit their lunar module to do the something-something McGuffin. They find a cracked Russian cosmonaut helmet – and then find the cosmonaut that belonged to it! Tension is ratcheted to unbearable proportions as Ben follows sand footprints into a dark cave, the only light coming from intermittent flashes made by his camera, the whine of its motor recharging the only noise accompanying his stressed breathing. And we wait for what is surely to come – a camera flash that will reveal more than just cave rocks…

The abandoned Russian capsule is located. “Who or what did this?” Something gets into Nate’s atmosphere suit! The mystery is overwhelming, the “monsters” unseen, as the astronauts must go about their daily protocol to survive not only the Moon’s unforgiving environment, but also the breach in their suits and the unidentified entity at large in their capsule.

APOLLO 18 is so realistically composed that any horror tropes would seem completely out of place: no roaring humanoid aliens carrying Earth women, no redneck hillbilly axe-murderers, no mutated proto-humans or space zombies – not even an “alien” from ALIEN! Rather, one crack in a glare shield, one rip in an atmosphere suit means deadly consequences. The enemy is the environment itself. This is not ARMAGEDDON or STAR TREK where movie sparks fly out of consoles to signify malfunction. When computers malfunction here, they just – Don’t Work. APOLLO 18, though it is “found footage,” rises above the morass (CLOVERFIELD, PARANORMAL ACTIVITY and the granddaddy of found footage, THE BLAIR WITCH PROJECT) with tension derived not from big monsters or supernatural magic, but from a fantastic real-world factoid.

The factoid: during the Apollo missions, 340 pounds of rock were brought back from the Moon…

The last ten minutes of APOLLO 18 are drenched in astro-sweat and space-gurgle, as Ben struggles to read the markings on the dashboard of the Russian module, through his tears of fear and desperation, mumbling unheard promises to his wife and child that he would see them again, as NASA calls for his quarantine and abandonment, ordering his orbiting crewmate to leave for Earth without him. But Ben will not be denied passage home, having discovered the reason why the Russians never returned, and why the United States want him to also never return, igniting the Russian module into orbit… the blackness beckons, as he screams aloft in a crash course with the orbiter… and the inside of his capsule rises to life…