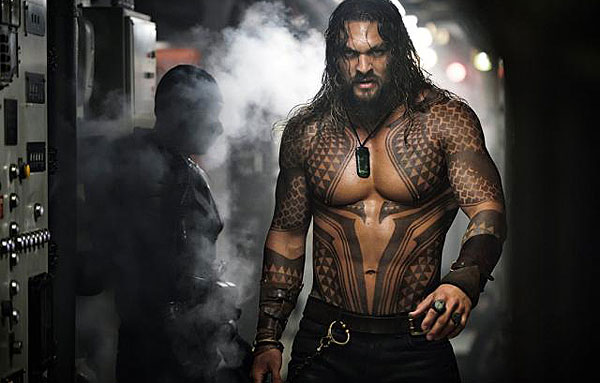 What keys does Aquaman have on his key-chain? WHY does he have a key-chain?
Can he not leave his keys on his turtle when he goes on these missions?

Will make you wet.

AQUAMAN graduates to jewel of the DC Comics universe, as it finds a perfect mix of action, humor, sex and surf.

An American screenwriter’s dream come true, for its fishy foreshadowing and porpoiseful payoffs (couldn’t resist!); an origin story and a high sea adventure, an undersea war and a touching family redemption. It’s got everything, from skydiving to laser-beaming, from politics to swordfights, from monsters to montages, and Pretty Orange Explosions That Interrupt Important Dialogue Scenes.

And Jason Momoa. [Hold for standing ovation from all the women.] Okay, don’t get your knickers in a frenzy. (Is that a saying? That’s a saying, right? Yeh, that’s a saying!) With his badboy tatts, V-shaped torso, leonine mane, low-slung package, velvet basso, and smoldering Medusa eyes, this ain’t your daddy’s green and gold sea-man.

Momoa is Arthur Curry aka “the Aquaman,” born of a human man (Temuera Morrison) and a Queen of Atlantis (Nicole Kidman), on a quest to reclaim his rightful undersea throne from his half-brother King Orm (Patrick Wilson).

Writers David Leslie Johnson-McGoldrick and Will Beall have a hard time making Orm a compelling villain, as his main goal is to rid the sea of all the land-dwellers’ discarded trash and return it back to the land from whence it came. So if Arthur wins the throne from Orm, will his first job as King be to, uh, keep the trash in the sea?…

Orm also seeks to unite all the undersea kingdoms under his mighty rule so that he will be declared – “Ocean Master”! … Uh, doesn’t so much sound like a regal appellation as a brutal top specializing in bondage urolagnia. 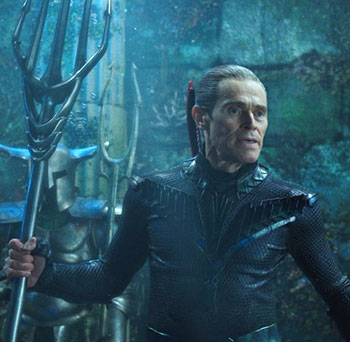 Willem Dafoe crosses over from Marvel to DC.
Can’t they find ANY other actors?

Willem Dafoe is Vulko, Orm’s grand vizier (who surreptitiously trains Arthur to be a warrior – probably because he wanted Arthur’s hot sea-mom), and Dolph Lundgren burbles his way through political wetwork as an undersea king of Atlantis Adjacent. Or someplace. One undersea kingdom includes a race of Sea Monkeys (remember that SOUTH PARK episode?) and there are even Craaab People Craaab People (they were on SOUTH PARK too! – Hell, even Aquaman was on SOUTH PARK – known by his man-love name of Semen—I mean, Seaman!).

Arthur is joined in his quest by Mera (Amber Heard in her tight green costume that unfortunately reveals absolutely nothing), the daughter of King Dolph.

There is a glaring power anomaly that AQUAMAN suffers from its first scene. The Aquaman is introduced lifting a submarine to the surface from the deep. Then he boards the sub and beats people up blah blah. But did you get that first bit? He lifted a submarine – not just above his head on land, which would be a pretty monumental feat – but through atmospheres of ocean water! Practically flew with it perched on his shoulders, up through the deep and into the air, letting it crash to the surface of the water! That means: every single act of strength Arthur performs after this submarine lift should be measured against that astounding act of strength. So when he hits a bad guy, that guy’s chin should shatter like eggshell, or his skull should separate from his spine and fly through the back wall. And when a bad guy hits Arthur, it should be like hitting the side of a submarine. But nope – Arthur engages in fisticuffs with bad guys like a regular Rocky verses Clubber, and they hit him and he falls down, then he hits them, and they fall down – and get back up again to attack him as if this wasn’t the guy who just lifted A FUCKING SUBMARINE.

And when Arthur battles his brother using his trusty quindent (the one he used in JUSTICE LEAGUE – which, apparently, is not the talisman it’s cracked up to be, as his quest involves finding his ghost father’s trident, which is eleventy times more magic), Orm is evenly matched with Arthur. Does this mean that everyone from Atlantis is super? But Arthur – if anything – should be less super, because he has land-man genes. (And by the way, can a land-man and fish-person even mate? Are their gametes even compatible? So they somehow sired a child – but why is he super?). Even Mera is super – demonstrated when she dives out an aeroplane with no chute using only her D-cups to break the fall. What are the rules? I dunno, I’m losing myself in Aquaman’s smoldering eyes—I mean, in the coruscating world of Atlantis, a CGI boobyscape of basilosaurian eye-strain. 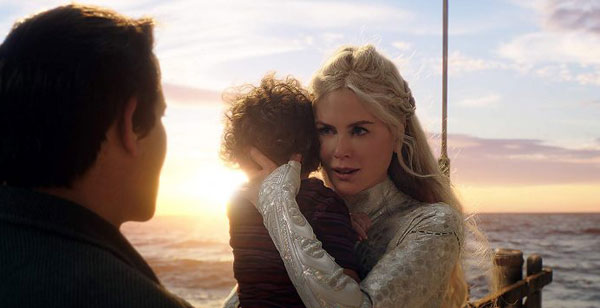 Modern blockbusters can never quite get “outdoors” right, can they?
I got an idea: SHOOT OUTDOORS!

Besides the cool way Arthur handles his celebrity with the starstruck village-folk (there’s even a joke about Arthur being an “Aquaboy” – “That’s Aqua-MAN!” – wink wink, remember Aqualad?), and his loving relationship with his father, the film gives us many surprisingly poignant moments, as when Arthur stands before Orm about to do battle, and laments how he always wanted to meet his brother, to find him, to know him, because he was the only family Arthur has left (Queen mother Kidman was thought to be put to death by the King for playing patticake with a land-man) – and just before the dialogue tips into lachrymose, Arthur adds, “But I didn’t know you’d be such a dick!” It makes us wonder how the one-note villain Orm isn’t taken in by the street charm of his surface half-brother!

One thing we presume Arthur did inherit from his human father was the ability to talk to fish—wha?? Yes, not one Atlantean that actually lives underwater can communicate with sea creatures telepathically. But Arthur can mind-meld with them, represented in a very cool effect, as Concentric Circles of Communication (CCC) – just like the old cartoons! (I’m gonna put an unnecessary scientific spin on this, and conjecture that his parents’ slightly incompatible genes caused a mutation and created this evolutionary benefit.)

There’s even a secondary villain: big-headed Manta (Yahya Abdul-Mateen II) with his red bug-eyes and laser-beams that can actually kill Aquaman – if only he didn’t have Bad Guy Aim. Manta is merely a blip in the storyline for dumb action sequences and Pretty Orange Explosions That Interrupt Important Dialogue Scenes. 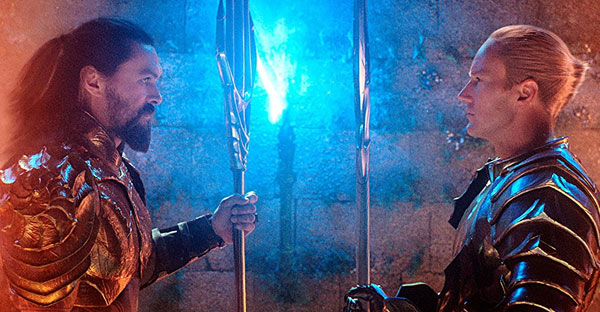 Pointy beard versus pointy chin in a battle to the cleft.

“You do your best thinking when you’re not thinking at all!” Not sure why Mera thinks she can treat Arthur like a big boob. Because he’s not. (This is one of those WOKE moments that doesn’t belong in this movie; a woman-empowering dig that requires the woman to put down the man in order for all women to feel empowered. Thanks, SJWs!) Arthur Curry is educated – he knows the names and legends of all the statues of great men overlooking the bay, he knows several languages, and he’s conversant with the cultures of both the sea- and land-people. It’s not Mera’s fault: she’s just written that way. Another example of stupid screenwriting: Arthur alludes to Pinocchio when they hide from pursuers in the mouth of a whale. Mera later shows him the book, and Arthur says, “It’s a book? I saw the movie.” If he saw the movie, then as educated as he is, he should know it came from a book. You filmmakers can’t have it both ways! (I hate this dumbing-down in American movies. ONLY in American movies, where they want the (obviously dumb) audience to relate to the hero. That’s why we hate you, Hollywood system! That’s why European movies have a greater cache with intellectuals – because those movies don’t talk down to their audiences.)

An action sequence is melded with a touching aside when Arthur finds the Trident Of Big Balls. Or Something. Guarded by a Kraken. Or somesuch. Instead of roaring right into the Predictable Final Fight With Giant Monster Effects, Arthur makes our eyes wet first. All through the movie, he has been claiming he is not a hero, he is not a king, and here, when the Kraken (voice of Julie Andrews!) asks who he is: “…for only the true king can take the Trident!…” we expect him to go Aragorn and claim his rightful throne – but this hulking super guy who can lift a submarine shows his place amongst the greater fishy world as he kneels and gropes for humility, “I am nobody. I am no king. I am no leader. I came because I had no choice. I came to save the people that I love.” Our tears lost in the undertow…

But of course, no other seeker of the trident has ever been able to “talk to fish,” and Arthur hits the Kraken with his CCC, and the Kraken is so confused that a sea-man can communicate with it, that it rises up to battle Orm’s giant army of sharks with frickin’ laser beams attached to their heads.

Austin Powers would be proud!

“Permission to come aboard?” Arthur coyly peeks over his shoulder to ask this question of two badguys on the submarine he just lifted, who must be getting massive paychecks from Villains, Inc. to attack this guy who just lifted their submarine…

But is Arthur really talking to US? To the whole cinematic universe, to accept this grander, bolder, sexier version of the underwater DC hero into our bosoms? Director James Wan (THE CONJURING) goes on a world-building spree where the CGI is surprisingly bearable for its ubiquity (not inflaming our nystagma like the overwrought visuals in BLACK PANTHER or at the conclusion of WONDER WOMAN) – and the underwater floating hair effects are flawless! Yet Wan balances his eye-bulging visuals with some very touching family affairs; and eventually – amazingly – even gets this street-cred Aquaman with the jeans and tatts into his characteristic comicbook green-and-gold gayboy gear (cough–battle armor!). Of course, it helps that the fish-man in the “armor” is the mighty Jason Momoa. If sex could be represented as a human, Jason Momoa is the walking penis to every woman’s howling vagina. So much so that even the upper-number sexiness of Amber Heard and Nicole Kidman is muted beside the pheromonic spasms of pleasure issuing like CCC from Momoa’s Atlantean chest and ruby thighs.

All through the movie we are told Arthur Curry is the real King of Atlantis, and in the film’s grandest payoff, when Mera shouts, “Hail to King Arthur!” that apocryphal historic epithet hits us square in the face. Like his pheromones. Ha! Why didn’t I see that coming?

Movie ends with Arthur’s affirmation, “I am – Aquaman!” and a posedown wetter than Wolverine roaring from the adamantium bath.

It will get your knickers in a frenzy. 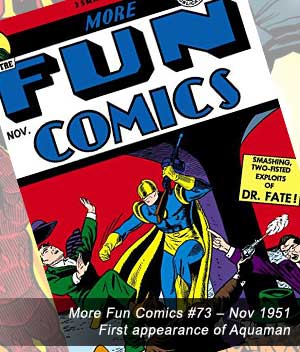