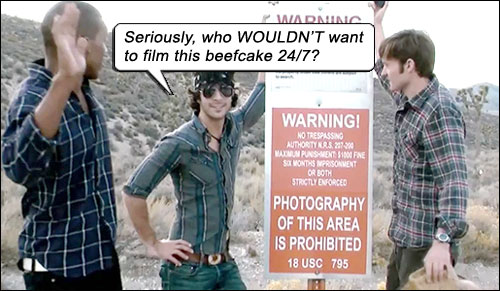 Some footage should just stay unfound…

A “found-footage” film, AREA 51 joins a growing list of Irritating Shaky Cam movies that RUIN – d’you hear me, filmmakers? – RUIN any story the film itself is trying to purvey. I understand we don’t want the torpid immobility of 1960’s locked-down cameras, but SHAKING THE CAMERA AT ME CONSTANTLY only highlights your insecurities with your storytelling ability. It doesn’t enhance it. And no, it does NOT transport me into the story as if I’m experiencing it with the characters. It transports me into the toilet to vomit my breakfast.

AREA 51 is what you’d expect: three douchebag high school friends (resident nerd Reid Warner, token black Darrin Bragg and dreamy beefcake Ben Rovner) attempt to break into Area 51 – the American government facility supposedly harboring extraterrestrial aliens and spacecraft – and film it. That last bit provides the impetus and rationale for these nonces to have a handheld camera running AT ALL TIMES.

They’re conspiracy-theorists, which gives them motivation enough for this caper, yet the screenwriters feel it necessary to add totally superfluous motivation, “Something is pulling me towards that base.” Seen CLOSE ENCOUNTERS much?

The premise is mildly interesting because we are curious on this storyteller’s take on such an intriguing subject (writers Christopher Denham and Oren Peli). The Three Douches have researched Area 51’s security measures and have found ways to circumvent them all. And for total BLAIR WITCH cred, they’ve included a plain chick in their troupe (Jelena Nik), whose dead father tabulated all the necessary schematics and maps for navigating within 51’s subterranean stronghold. And who won’t create unrequited romantic tenseness with her plainness.

They actually do break in – and find floating rocks, motion-reactive liquid, a spaceship with an organic skin, sleeping pods; amazing extraterrestrial technologies. And extra-terrestrials…

For example, at one point, two of them break into some military guy’s home to get some McGuffin (by this point, due to Irritating Shaky Cam, I’m not even paying attention to the plot and just waiting for an anal probe), and the military guy and his family return to the house, inadvertently trapping the two guys into sneaking an escape. WHY ARE YOU FILMING EVERY SECOND OF YOU SNEAKING AROUND HIDING IN CLOSETS? How is this in any way pertinent to uncovering Area 51’s mysteries?! You’ve got what you came for – next step is to get back to the car and get the hell outta there. Put the fucking camera down and run, you d-bag!

Also, while staking out the military guy, these imbeciles park in a car about 50 feet up the street. With the car’s interior lights on. To reiterate: on a quiet suburban street, while it’s dark outside, they’re ducking low in their seats staking out military guy’s house, peeping the camera above the rim to film it… WHILE ALL THE INTERIOR CAR LIGHTS ARE ON. (Is it any wonder extra-terrestrials are probing us, trying to discern exactly how organisms this IRRETRIEVABLY STUPID can still function?)

Common sense: In the deserted, snaking corridors of Area 51, to look around corners to check if the coast is clear, the idiot with the camera puts the camera around the corner to look! When they’re running desperately from pursuers, panting and swearing and searching for a way out, douchebag is FILMING THE CORRIDOR HE’S RUNNING DOWN, not – heaven forfend! – stopping the camera and fleeing properly, and not even letting the camera run while it’s in his running hand, no, FOCUSING THE CAMERA IN FRONT OF HIM WHILE HE RUNS.

You know the first rule in acting before a camera? Don’t Look At The Camera. Actors train themselves not to do this. Thus – the first reaction of civilians who are being filmed by a handheld camera would be to look at the camera. Yet in this film NO ONE looks at the camera, not even the supposed amateur talking heads they interview at a truck stop. Is everyone a professional actor? Answer, of course, is yes. Extras gettin’ their SAG card on! “Did you see me in that alien film, Mom?” “No dear, I had to take my heart pills and go lie down, because the camera was shaking too much…”

They film themselves walking to the door of their trailer. They find the door unlocked! Let me interject again, as I fall out of the film entirely: This moment happened to be a plot point – but what would have been the purpose of keeping the camera running if they were supposedly just walking to the front door and going inside? Exactly how narcissistic are these hipsters that they think we need to see every single inane waking moment of theirs? You’re here to film the interior of Area 51. Exactly how many disks did you bring to waste on all this irrelevant “walking to the door” footage? And did I forget to mention that other pet peeve of Irritating Shaky Cam movies? Unlimited Battery. Thank you, Energizer!

Filmmaker Oren Peli (the mastermind behind the original and best PARANORMAL ACTIVITY 2009) has been Producer to more crap than quality since his 2009 breakout hit. This is only his second directorial effort since PARANORMAL. And he has not grown at all. In fact, he’s completely dropped the ball. If you think this Method of dumbass Irritating Shaky Cam is the future of film, Oren, appealing to a tween-scream set that will laud it as “classic cinema” in years to come – get thee to a nunnery! Your myasthenia-inducing crapfest will ironically become as lost as actual found-footage film.