The Year of Living Hollywoodly.

When your facial hair says yes and your fashion sense says no – that’s ARGO. 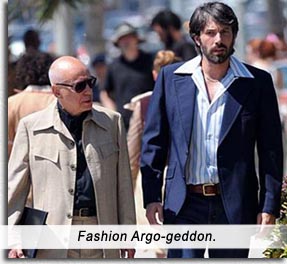 ARGO is a Hollywood movie Based On A True Story, which means everything in it is fiction. So stop complaining through your faux sophistication.

Why ‘faux’? Cos while everyone’s arguing over What’s Authentic and What’s High Fashion, this movie’s very existence tells you that what you thought was true was NOT. Since these events in 1980, world governments put it over on you for 17 years before this mission was declassified in 1997 – and suddenly everyone’s a CIA scholar with insider knowledge on what’s real and what’s fake…

Whatever you may think about ARGO’s authenticity, Ben Affleck doesn’t care: He’s made a nail-biting, pants-wetting geopolitical thriller, gone triple-threat as producer, director and star, taken artistic license and cinematic trope and piled it mustache-over-bellbottom into this popcorn rollercoaster, and attained critical and commercial acclaim – and all while wearing ’70’s fashions disco enough to kill a small pony.

Shades of modern Benghazi as protesting Iranians in 1979 overthrow the U.S. Embassy in Tehran during Carter’s presidency, and capture 56 American hostages. Six Americans escape and hide out in the Canadian Ambassador’s home. The CIA – that stalwart, mud-brained organization that gives ‘intelligence’ a bad name – comes up with rescue ideas for the six, like providing bicycles for them (to cycle across hundreds of miles of mountain in the snow during the insurgency). (I found it strange that the CIA were only talking of the six fugitives, as if there were not scores of other actual hostages whose lives were in graver danger – but I guess this was a ‘movie decision’ by Ben’s beard, so as not to muddy the plot.)

Mendez (Affleck) comes up with the daring plan to pose the fugitives as a Canadian film crew scouting exotic locations, and to fly them out in plain view. For this “best bad idea” to work, Mendez had to accrue all the sundry elements that a film in production would have – script, posters, actors, a business office, press junkets (to say nothing of the fake identities, personal backstories and passports, etc.) – to make it “real” for the imminent interrogations at checkpoints. He enlists the aid of makeup expert John Chambers (John Goodman), who actually worked on the PLANET OF THE APES movies, and producer Lester Siegel (Alan Arkin), who is a figment of someone’s imagination – both of whom bring a savvy, self-effacing anti-Hollywood smirk to the proceedings, even though they are neck-deep Hollywood insiders.

The science fiction script they find amongst a pile of screenplays, that calls for “exotic Middle Eastern locations” – is titled ARGO…

And at the time, the world was fed the patchwork piecemeal propaganda-quilt that was The Official Version: that Canada baked the plan and hatched the snatch; that Canada gave out medals and won awards for freedom and such. To protect the hostages remaining in Iran (who were released hundreds of days later), any U.S. involvement in the fugitives’ escape had to be suppressed, and Canada – oh sweet, neutral, soft-bicepped Canada – were the badasses on toast.

And who are we to argue when the gubmint tells us so?

If you thought GONE BABY GONE and THE TOWN were flukes, Affleck proves he’s got the directorial sac-hair with ARGO. Along with screenwriter Chris Terrio, Affleck has taken his liberties sensibly, inserting all those elements into this “real life” story that make it “cinematic”: the excellent scene where the Iranian woman reads the insurgents’ demands on air while simultaneously, the Argo cast are performing a read-through of the script with all their cheesy costumes on; the character arc of one of the fugitives (Scoot McNairy) who didn’t trust Mendez and refused to take the cover story seriously, who eventually saves the day when he explains the full plot of the fake movie in Farsi to a checkpoint guard; the reconciliation of Mendez with his estranged wife at the end – even though in reality he wasn’t separated from her at the time of this event; the ticking clock of the authorities painstakingly piecing together the fugitives’ shredded pictures, which ultimately leads to the grandest cinematic flourish of all – armed vehicles chasing the plane down the runway during takeoff.

Really? Has anybody EVER chased a plane down a runway, except in action movies? When you can just as easily force the air traffic controllers at gunpoint to order the plane to abort its takeoff? But all these elements are the mark of a good filmmaker – it’s what drags you into the story, panties wet, nails bitten, popcorn flying.

Cinematographer Rodrigo Prieto shoots ARGO with that ’70’s sheen, recreating riot scenes that look exactly like those old news broadcasts. And the cool soundtrack (Zeppelin, Van Halen, Dire Straits, et al) always makes me ask: Do the adults of the day listen to the actual popular music of the day? Isn’t pop music what ‘those danged kids’ listen to? And Costuming and Makeup have outdone themselves, dressing everyone like dorks with badass ‘staches that only looked good on Burt Reynolds.

Affleck’s duty as actor is an impeccable study in quietude. See his face on the poster? That’s pretty much it throughout the movie. Frozen in anguish. A grand, understated performance. Keep in mind that Affleck’s film persona is action hero, yet he has cast himself in this lead role knowing that his character is a man of calm. In embracing the Clint Eastwood Method (“Don’t Just Do Something – Stand There”), he never raises his voice – even when barking orders, he does so “quietly” – yet creates a powerful compelling presence. Is this young actor-director the New Eastwood? Fifteen years ago, I would have had my License To Insult Celebrities revoked for even thinking that, but now with ARGO, it looks ever possible, what with the god Eastwood revealing himself as a Low Information Voter and talking to empty chairs. 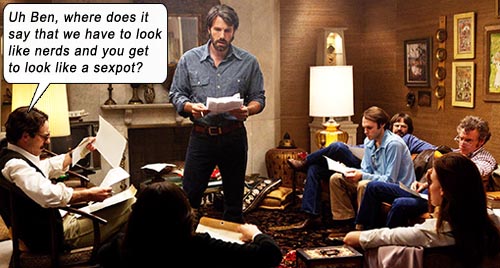 ARGO is a pretty slanted movie, in that it portrays the Middle East as an uncoiled spring, a livid mess, in constant turmoil, and regarding the United States as The Great Satan; the movie serves as one more argument towards doing what many politicians and pundits have thought at least once in their wretched lives: Nuke Em All… and start again, with people less inclined toward religious and political insanity and more devout to the religion of amity toward their species, black, white, jew, infidel or lawyer.

Many nationalities are unhappy with the way they are portrayed in ARGO – there are slights to the British, New Zealand, etc. who all helped with the mission – yet the Iranians get the brunt of the derogation. Can you blame the filmmakers? They’re just reflecting reality: any little stupid thing over the last 5,000 years and Iran explodes in religious fervor, suspicion, beheadings and magic carpet riding.

After Siegel deflects a nosey reporter by telling him the meaning of the title is ARGO Fuck Yourself, it becomes the unofficial title of the mission, an in-gag between the producers. But it’s the credo of Iran, isn’t it? THEY are the only people on Earth chosen, sacred, and allowed to kill in the name of god. And everyone else can Argo Fuck Yourself. (I guess this applies to any religion, just with less magic carpet riding.)

The main thing that laypeople should take away from this movie is that there are things happening in the world right in front of us that are really behind our backs. What caused the Tunguska Event? What crashed at Roswell? Who shot J.R.? Where’s the beef? Oswald worked alone. Burning jet fuel brought down the Twin Towers. And Seal Team 6 killed Osama bin Laden in Abbottabad on May 2, 2011 at zero dark thirty.

Who are we to argue when the gubmint tells us so?

Did the Iranian guard really grill the fugitives about the Argo film at the runway gates? Did the Iranians really piece together pictures of the fugitives from shredded photos? Did the U.S. government almost abort The Canadian Caper due to a planned military strike to free the actual hostages? Did Tony Mendez have any facial expression other than Concerned Face No.6?

It matters not whether the cars chased or the market vendors threatened, or the phones buzzed hot at the last minute, ARGO will go down as the official version of what transpired over those fateful Canadian bacon nights.

Ben Affleck’s beard tells us so.

Who’s Right? Who’s Wrong? We’ll find out when there’s only a Who’s Left.
So here’s a thought: maybe America installing Shah Reza Pahlavi in Iran in 1953 was its way of “nuking em all” in a civil manner; trying to eradicate the religious and political fervor of the Middle East by planting a man on the inside. I once regarded America as the unequivocal Bad Guy in that geopolitical psychodrama, but maybe they were just trying to avoid bloodshed and actually playing The Long Con. (?)

The point of contention with that coup d’état was its blatant hypocrisy: the United States leading the overthrow of democratically elected Mosaddegh to install dictator Pahlavi, while crowing about democracy!

Can Iran be blamed for hating America for decimating its sovereignty? Or can America be blamed for trying to ease the coiled spring mentality of Iran by putting puppet Pahlavi in charge? Can Iran then be blamed for overthrowing Pahlavi in ’79? Imagine if someone overthrew the American Presidency and installed a dictator? What would YOU do to get your country back?

Iran storming the American Embassy and taking hostages was in response to America safeguarding Pahlavi after he was deposed. In other words, the Hostage Crisis of 1979 was blowback for America’s actions in 1953! But America’s actions in ’53 were in lieu of another Nagasaki; it was trying to quell the spread of geopolitical idiocy (and get cheaper oil) without dropping another bomb. Who’s in the wrong? We’ll find out when the winners eventually rewrite history.

How The CIA Used a Fake Sci-Fi Flick to Rescue Americans From Iran
The original article that inspired the film
by JOSHUA BEARMAN, April 2007