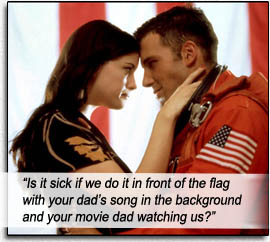 ARMAGEDDON is a painful exercise in squeezing every cliché possible into 150 minutes of swooping camera moves, slomo shots of blond American farm kids, nauseous flag-waving and the movie’s heroes walking abreast towards the camera, with smoke billowing in the background in slow motion. At least twenty times.

ARMAGEDDON is also about an asteroid (“the size of Texas”) on a collision course with Earth, which only Bruce Willis’ team of oil-drillers can destroy, able to perform the requisite deep-core planting of a nuclear device on the asteroid to blow it up. You can’t train actual astronauts to do technical stuff like that, no way.

While a slightly perverted subplot revolves around Ben Affleck pursuing Willis’ daughter, Liv Tyler, a cavalcade of B-stars makes A-holes of themselves in the middle background: Billy Bob Thornton, Steve Buscemi, Michael Clarke Duncan, William Fichtner, Will Patton, Owen Wilson, and trusty Chris Ellis (Deke Slayton in APOLLO 13, and forever cast as Some Guy In Mission Control in all these space films).

A movie with less science than STAR WARS (if that’s even possible), less physics than MOONRAKER (which had none), less credible operating procedures than CAPRICORN ONE (which faked them), and less street cred than DEEP IMPACT (which preceeded this film by two months). And – of course – ripping off Arthur C. Clarke and Isaac Asimov so bluntly and banally, the filmmakers should be roasted over an open spit when they make that big science fiction convention in the sky which Clarke and Asimov preside over.

Only one example of the thousands upon thousands of uneducated scenes should convince a viewer what an eye-candy fool’s joke ARMAGEDDON is: two space shuttles are launched simultaneously – okay, fine – but fifty feet apart? Just seeing them attain low Earth orbit together and jettisoning their Solid Rocket Boosters should give even the most “unscientific” bananahead (i.e. the filmmakers) an idea of why this was such a monkeybrain scene – the SRB’s are ejected via explosives which propel them away from each vehicle – into the flight path of any other vehicles in their vicinity. Of course, in the film, tragedy is averted by making the CGI SRB’s jettison AWAY from the path of the following shuttle. But anyone with common sense will look at this scene and realize what a brainless berk Michael Bay and his writers are for allowing it onscreen.

CAPRICORN ONE was an uneducated mess, but space movies made before the 90’s at least had True Ignorance on their side. The general public only knew so much about orbital mechanics and physics laws. Now there is NO EXCUSE for movies to treat outer space like a thrill ride at Six Flags. We’ve all seen footage of actual space shuttles in space – so how can Michael Bay’s shuttles fly around as if they’re in an atmosphere, following NO orbital mechanics, trajectories, or laws of physics. Why is there sound in space? Shouldn’t these people have their glare-shields down on EVA in sunlight?

We know all this via the very technology these movies flaunt, yet pretend to ignore, in order to serve the asinine plot.

Everyone in space shouting at each other like they’re actors doing something really hard and important – even though they’ve all got headset radios; everyone extolling information which should have been imparted in training (“you’re about to hit minimal gravity, so you might get nauseous” – thanks for telling me two seconds before I hit minimal gravity!); non-sequitur action, like Buscemi picking up a machine gun and firing arbitrarily, simply to cause concern for the characters (which I lost as soon as they started singing Leaving on a Jet Plane like the Oil Riggers Men’s Choir), rationalized as “space sickness.” THIS MOVIE is space sickness.

Every scene an epic moment waiting to happen, like Liv Tyler with her hand on a monitor after tearful goodbye to her father in space; camera pulls back and every single monitor in NASA is showing that same transmission – not like they have anything important to monitor, like the incoming space shuttle with a thousand malfunctions represented by all the white-hot Movie Sparks jumping off the consoles. And if the epic shot doesn’t happen, Michael Bay jumps on his Chapman crane and makes it happen, annoying inspirational music padding the faux-Six Flags thrill-ride-just-to-get-The-Shot.

Best line is when William Fichtner describes the other crashed shuttle as being “off the grid” and Buscemi retorts, “Off the grid?! What’re you, a freakin’ cyborg?!”

One redeeming factor of ARMAGEDDON is that it actually delineates what a “hero” is – for this society which tags foopball hooligans and people jumping out of buildings and army grunts doing their jobs as “heroes.” Bruce Willis stays behind to detonate the nuclear bomb. He is a hero because HE HAD THE OPTION NOT TO.

The two halves of the asteroid “miss the Earth by 400 miles” and around the globe everyone cheers, Chapman crane swooshing in ecstasy, blond American farm kids hugging their parents in slomo – with everyone once again ignoring the physics law that puts those pieces (each half the size of Texas, mind you) in orbit around Earth (unless they’re pulled out of orbit by another celestial body), which means, in Earth’s future, another flyby, another potential collision…

Let’s hope next time that ignorant human species is wiped out.