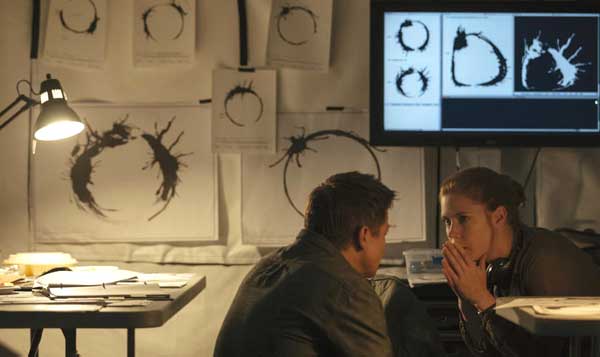 “Don’t look now, but I think our coffee stains are trying to invade us.”

Mind Encounters of the Close Kind.

Unless I’m mistaken, she’s stuck in a time-loop, where extra-terrestrials, having arrived, affect her past, present and future… How do we say Hello? And how do we tell the stupid people of Earth to butt out of the conversation?

ARRIVAL is an intelligent science fiction Möbius strip that speculates on the first contact between humans and extra-terrestrial beings. Speculations not just on how to say Take Me To Your Leader, but on the nature of time and space; a pondering on communication itself, and how we as a species are so lost in translation amongst ourselves. 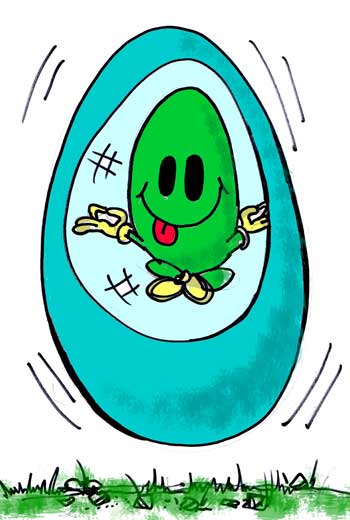 In twelve locations around Earth, gigantic cylindrical extra-terrestrial ships hover soundlessly; made from unknown materials, warping gravitational fields, causing widespread panic with the primitives that call themselves the rulers of the planet.

Linguist Dr. Louise Banks (Amy Adams) is called in by the U.S. government to translate the language of the aliens hovering in the Montana skies. Physicist Ian Donnelly (Jeremy Renner) also plays a part in translation, and somehow a part in Louise’s life that is not your average boy-girl meet cute. What they discover is an ambiguity wrapped in a warning and twisted into fourth dimensional pretzels.

And world governments and all of humanity react accordingly, i.e. like a monkey house, screeching unintelligibly and flinging feces at each other.

Reportedly an excellent filmic adaption of Ted Chiang’s 1998 sf story, The Story of Your Life, ARRIVAL is that rare, controlled film that does not talk down to its audience, and asks us to ponder every scene like the presumably intellectual beings we claim to be. In Chiang’s own words: “it seems like the project has managed to avoid the typical Hollywood disasters you hear about.” (interview, Electric Literature).

The aliens (whom the scientists call “heptapods” due to their seven appendages) communicate via a written language unlike any other we have witnessed in science fiction – splooshing out an inky substance that forms a rough circular shape, with each minute striation and blotch carrying meaning.

The first word Louise tries to communicate is “human.” This is where the film tripped and bashed its face on ego. How about “hello”? Or – as Carl Sagan judiciously instructed in his brilliant novel Contact – how about a basic course on mathematics, as that – not English – is truly the universal language?

Forest Whitaker (with a strange Boston accent that might be alien), is Colonel Weber, in touch with military and political bases around the world communicating with their own hovering aliens, all of whom gradually become wary of each other because each reads into the aliens’ messages their own insecurities. Louise even makes an analogy: if you communicated via chess, then everything would be about opposition and battle; if you communicated via game tiles, then all your messages are based around that strategy; if you taught someone just to be a hammer, then (Weber completes the thought) “everything else is just a nail.” And human military is trained to be nothing but a hammer. They prove the analogy with the single explosion in this film – a bomb placed by American dopes in camo, acting on limbic instinct and tribal parochialism. Now the good thing about this human stupidity is that it is regarded as such by the filmmakers – this is not a “Go USA” or heroic moment; it is seen as stultifying if not damaging irreparably the progress made by Louise.

“So this is what a VHS video tape feels like…”

Louise tentatively translates, knowing it could mean myriad things in different contexts, but it’s ambiguous enough that the monkey house goes nuts and sends countries fleeing offline and executing their generals for deciphering it, in order to keep it secret from the world.

The heptapods clarify that they are trying to help humans in the present, so that in 3,000 years, humans will return the favor and help the heptapods… Not regarding time as linear, they sense the past, present and future all at once… Wait – they need humans to help them as a species? Man, they really picked the wrong end of the galaxy on that one.

The heptapods’ written language is a metaphor for the plot that wends in and upon itself. “Their writing is free of time, no forward or backward direction. Imagine writing with both hands from either side: you would have to know all the words you’re going to use and the space you would need for all of them.” Only after viewing the movie in full, do we realize it too is constructed this way. In the heart-breaking prologue, Louise births a daughter named Hannah (her name, a palindrome), who grows to a teen and dies of cancer (“Come back to me…”); and like Hannah’s name, the movie itself palindromes us, as it winds to a wondrous conclusion that mirrors its beginning. Come back to me.

It’s a brilliant concept that treads mysticism in its final moments, but then, as Arthur C. Clarke told us, “Any sufficiently advanced technology is indistinguishable from magic.” And in the final moments, Ian (Renner) calls Hannah “starstuff” – a conscious nod to Sagan, one of his favorite phrases from COSMOS: A PERSONAL VOYAGE.

This cerebral film is not for Marvel-lites who expect punching in place of thinking; it is not for fans of INDEPENDENCE DAY et al, who expect alien ideas based around human concepts instead of out-of-the-box technology that can hardly be comprehended by human standards.  ARRIVAL is true science fiction, updating Carl Sagan’s ideas of extra-terrestrial contact. Sagan postulated in Contact that extra-terrestrial intelligences would initiate contact with only those civilizations who could understand the means of communication. In Sagan’s story, mathematics was used as the universal language, for indeed it is, no matter what it might be called by other intelligences. In other words, only those who could decipher the message – with radio astronomy, and technology beyond fire and the wheel – would be recipients of the message. Those who did not possess the means to understand the message would simply not see it; in essence, it would not even exist for them. 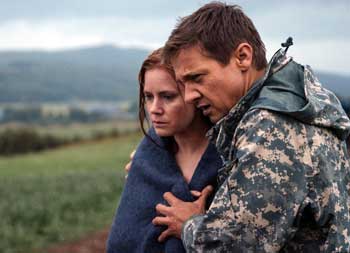 A traumatic alien encounter is good enough excuse
for a quick grope.

So too, this movie, screenplayed by Eric Heisserer (HOURS) and directed by Denis Villeneuve (SICARIO), is only for those who have the necessary axons and dendrites to perceive it. This concept is built into the reason the ships hover and do not land: According to production designer Patrice Vermette [from imdb Trivia]: “The twelve identical ships would hover twenty-eight feet above the ground in delicate equilibrium, leaving it to Earth’s people to make the final outreach to contact them.” Any organisms too primitive to do this – the ships’ message is not for them.

I like the “kangaroo” story. Louise tells of the British who landed on Australian shores, asking the Aborigines what that animal was that hopped around and put their babies in their pouch. The Aborigines said “kangaroo”– and only later was it discovered that kangaroo meant “We don’t understand.” A story as bullshit as the phrase “shrimp on the barbie” – the point being, you can never really know what the other person is saying…

Another movie that elevates scientists, linguists, mathematicians – you know, smart people – and portrays the military as the belligerent, fearful dumbasses they are trained to be. The military minds opine the heptapods are cajoling humans to fight amongst themselves until one faction prevails. So they start fighting. I imagine that when aliens do arrive, they will never fathom the small-mindedness, fear and ignorance of this civilization that somehow conquered space travel. I have no faith in the intelligence of humanity any more. America keeps jowling about “minorities” taking over – but in the America of 2016, the intelligent have been proven to be the biggest minority! Being browbeaten into the shadows by necks redder than baboon asses.

Pfuh! Humans! The quicker we are wiped out, the better. Really. If a smarter extra-terrestrial civilization exists, is there any reason for us to clutter the galaxy with our irrepressible petulant selfishness, our dripping dicks and our amoeba-brained Trumps?

Hel-LO? How do we tell the stupid people of Earth to butt out of the conversation when extra-terrestrials, having arrived, affect our past, present and future? Unless I’m mistaken, we’re stuck in a time-loop…