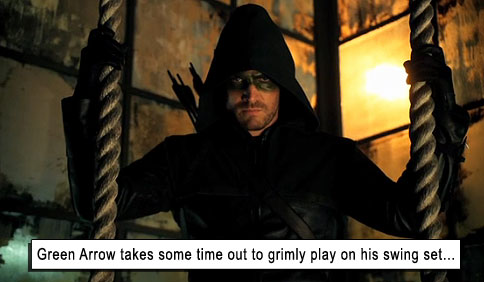 Through an Arrow Greenly.

He’s green. He shoots arrows. He’s – The Hood. Uh, I mean, he’s Green Arrow, um, at least, that’s who he’s meant to be – but no one ever calls him that in ARROW… the CW TV series that is too-kewl-fer-skool or sumpin. (What is it with these “grounded” superhero tales? So it’s not legit to call someone Green Arrow but it’s totally legit to smear green snot over his eyes and pretend like his girlfriend doesn’t recognize him?

Slightly tweaking DC Comics canon, billionaire playboy (where’ve I heard that before?) Oliver Queen is lost at sea on his father’s luxury yacht and presumed dead. He spends five years on a deserted island, gaining combat training from a mysterious Asian warrior, tightening up his pasty doughy richie body, getting Gilligan out of scrapes with headhunters, and talking to Wilson.

He returns to Starling City (Star City in the comics) and resumes his privileged life as a billionaire playboy, but with an alter ego – a hooded vigilante with a bow and arrows who prowls the night, determined to clean up the corporate criminals making his life hell by taxing him higher than Mitt Romney.

Stephen Arnell (who looks alarmingly like Chris O’Donnell) is Oliver Queen aka Green– um, whatever: raspy-voiced, grim as stones, archer extraordinaire, requisite dreamy body covered in TV scars to prove how gangsta he is from his island torment; seared scar tissue not icky or offensive, just to make girls moist (those aren’t scars, they’re aphrodisiacs). The filmmakers have captured the athleticism of the character; Green Arrow was always a-swingin’ and a-leapin’ through those comic panels, and they’ve modernized that skill to make him a “free runner” aka Parkour. (We can also see that the fit Arnell is doing many of his stunts; another aphro.) His father’s list of corporate swine clutched in one green-gloved fist, he dons a faux-vinyl ballet outfit and shish-kabobs everyone.

And that’s the coolest part about this TV series: murder. Green Arrow (uh, the guy from the comics) developed into a real “outlaw,” even for those who advocated vigilantism. He stepped on everyone’s toes, in the comics world and the real world. And the series has steered into the curve by having The Hood (uh, Green Whatever) actually skewer numerous henchmen and crime bosses, actually killing them. They’ve replaced his fruity little Robin Hood cap from the comics with a green hood (as his comics designers did in the mid-70s), because as we learned from Trayvon Martin, anyone who wears a hood is an outlaw.

Green Hooded Fella recruits ex-military John Diggle (David Ramsey) to help him skewer baddies; starting as Oliver’s bodyguard who couldn’t keep up with him (cos Oliver was so ripped and scarred and sexy). And Katie Cassidy is unbelievably hot as Greenish Hoodie’s casual girlfriend reporter Laurel Lance, whose cop father (Paul Blackthorne) suspects Oliver is The Hood/ The Archer / That Green Guy, because no two men could have butts that perfect.

Why is everyone so goddamned PRETTY?! How hard can life be – morally ambiguous or not – when your features have set in that manner that guarantees you will have the opposite sex pounding at your back door to pound at your back door? Also, how hard can it be to assume a life of crime-fighting when you’re a privileged, enabled billionaire playboy with nothing better to do? Try maintaining your weapons and training regimen and sleepless nights and raspy voice when you have to spend four hours on the phone trying to be assigned a doctor through the limpdicked American health insurance program; try fighting crime when your car needs to be taken to the mechanic three days in a row and you have no money to pay for a rental car to take you to jobs that you are missing; try training your body to muscle perfection when you can’t afford to buy food. And look at how he was “lost at sea” – on his father’s luxury yacht. We should all be lucky enough to have a luxury yacht to get lost at sea in….

As with all matter in the universe: action/reaction. In the late 1960s, writer Denny O’Neil (with cartoonist Neal Adams) wrote out Oliver Queen’s fortune, turning him into a voice for the poor. Musta paid heed to the voice of the poor, who obviously were not buying the comics (in more ways than one).

How to get viewers interested in ARROW for television? Casting. Man or woman, your groin will hurt watching these pretty people prance. Arrow. Just don’t say Green. Problem solved. 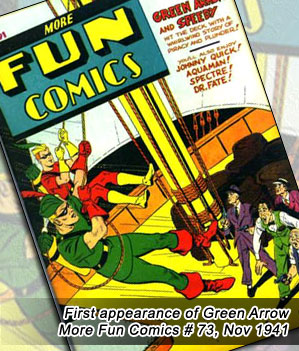 GREEN ARROW
created by Morton Weisinger and George Papp in 1941.