Lost between the Moon and New York City. 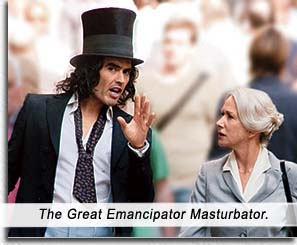 Or just be drunk.

The filmmakers should have asked themselves – and the public that they planned to foist this movie on – that age-old question reprised after most tragedies (Holocaust, Kennedy assassination, 9/11), “Too soon?”

The slogan of ARTHUR is “Meet the world’s only lovable billionaire.” Isn’t that the most antagonistic of oxymorons in this economic climate?

This remake of the iconic 1981 Dudley Moore movie of the same name is an embarrassment to that original movie, to Dudley Moore, to British comedy, even to the Statue of Liberty. Even with all its wink-wink references to the original, it is not merely “slightly worse” than that movie, it does not “fail to capture” the spirit of that movie – it is simply a stand-alone abomination.

The half-brained filmmakers (whose names are pointless) have retained director-writer Steve Gordon’s story (from 1981’s ARTHUR) – that of drunk playboy billionaire Arthur Bach (Russell Brand) standing to inherit the corporate family fortune on the provision that he cease dragging the family name through the tabloids with his idiotic antics, and marry a corporate socialite (Jennifer Garner) with whom he shares no chemistry. Arthur would rather marry a down-to-Earth penniless blond hustler he meets on the streets of New York.

Right there, the plot smells. Maybe in 1981 millionaires were worried about their spawn creating tabloid headlines, but in 2011, we don’t see Richard Hilton giving an ultimatum to his retarded alcoholic slut daughter Paris to stop being a retarded alcoholic slut on the threat of disinheritance. On the contrary, the more tabloid press, the more publicity for the Hilton brand. And any publicity is good publicity.

Brand has been asked to portray more of an arrested development child than an alcoholic; he has studiously been made to slur his speech ever so slightly to pretend to be inebriated, because in this anti-drinking, anti-smoking society, heaven forfend he actually portrays the “loveable drunk” that Moore gave us, never mind vomit on someone’s dress or pee on himself while lying in the gutter. The replacing of Arthur’s male butler with a female liege (Helen Mirren) twists the original theme from that of jaded, enabled heir seeking true love rather than manufactured marriage, to a man-child seeking an Oedipal mother figure.

Though they’ve retained the story structure, the filmmakers have rewritten Moore’s witty verbal onslaught to accommodate people who don’t read; they’ve replaced Moore’s phenomenal piano interlude with some guy tinkling jazz at a bridal shower; they’ve given Brand a magnetic bed for no apparent reason other than one sight gag that isn’t funny; and though the brilliant Brand’s talents are wasted here, at least his accent sometimes conjures nostalgic recall of Moore at his finest.

Mirren staunchly plays Hobson, the role made Oscar-worthy by the imperious Sir John Gielgud. Arthur’s down-to-Earth love interest is the bland, vanilla, uninteresting, insipid Naomi (Greta Gerwig, who was unfortunate enough to be born with no personality – but I guess you don’t need a personality with legs like that). Luis Guzman is even more pedestrian than Gerwig, as Arthur’s driver. Nick Nolte is the tough-as-nails (literally) father-in-law. And Jennifer Garner is still on that diet that keeps her unnaturally thin and distressingly ugly.