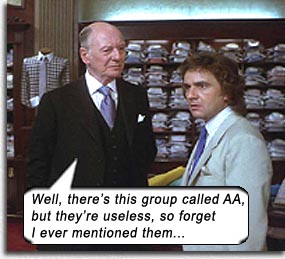 Back when being just a millionaire was sufficient enough to be an absolute arsehole, ARTHUR hits the screen with the impact of passing out and whacking your temple on the table – as we meet millionaire playboy Arthur Bach (Dudley Moore) in the back of a stretch limousine, blind drunk, picking up a prostitute, taking her to a swank restaurant and loudly embarrassing his rich peers, then keeping her overnight until his butler loquaciously disposes of her the next morning, whereupon Arthur languishes in a bath sipping on martinis.

Such a lovable arsehole!

But look deeper: within this raunchy opening sequence, thematic seeds are sown that raises ARTHUR above the simplistic alcoholism meme it has been saddled with. During dinner, Arthur asks the prostitute, “Do you like me?” Her answer that he is “cute” elicits insistence from Arthur, “Yes, I know, but do you like me?” The pathos and sadness of his query is masked behind boorish laughter – a defense mechanism we can all relate to – and that, fellow binge drinkers and whoremongers, is the crux of this tale:

Arthur is super-rich, over-privileged, spoiled beyond rotten, and the cavalcade of females through his bedchambers does nothing to make his lonely existence more bearable. He’s aching for something more – actual love and earned respect.

So let’s dispense with the meme that has crippled this movie – Arthur is not an “alcoholic,” he’s a drunk. We have to make this distinction, to differentiate ARTHUR from a politically correct message movie. Arthur doesn’t seek pity for a “disease” which he cannot control – there are many scenes where he is stone cold sober – he drinks merely to punctuate the boredom of his enabled life. Dudley Moore made his inebriated passages such a cackling feature of this movie that that small character trait was misinterpreted as thematic grist.

Arthur’s real spiritual burden is MONEY. It is money he can’t do without. (In that sense, he is just as diseased as any Wall Streeter in this modern age.) When he meets the fun, sexy girl of his dreams, Linda (Liza Minelli), his dilemma has nothing to do with alcohol, but rather, his father and grandmother threatening to cut him out of his inheritance if he marries her, instead of the arranged marriage they have set up in order to unite two business dynasties. Arthur’s arranged betrothed (Jill Eikenberry) represents just another facet of the wealthy lifestyle that Arthur is inured to, yet can’t live without, which is why he can’t stand his fiance, yet accepts he is trapped, and drinks to ease the horror.

Linda’s explosive bubbliness and straightforward manner (as opposed to the sophisticated facades of the polo-playing, horse-breeding yacht-enthusiasts he is surrounded by) provides Arthur with just the right amount of earthy reality check he needs. Not to stop drinking – to realize he can go on without money.

Also providing Arthur with grounding is his liege Hobson (Sir John Gielgud, as tender as a twisted noose), his regal wit deployed as a hatchet is deployed to traitors of the Crown. Gielgud steals the movie, not only with his impeccable high-browed delivery of barbs, but with his poignancy; of someone who knows his end is near and wants his surrogate son to find happiness in life.

Every supporting player is dynamite: from Linda’s starstruck dad (Barney Martin) to the rich girl’s forceful father (Stephen Elliott), who wields a shotgun ostensibly as a big game hunter, but metaphorically reminding us how to term Arthur’s impending marriage; to the flower vendor who was “married once… she’s still alive”; down to the little boy who sprays his breath before dancing with the little girl at the engagement party. And the guy at the diner whom both Arthur and Linda shout at, “Eat your roll!” – is The Thing from RESERVOIR DOGS! (“You’re Mr. Pink – and that’s that!”)

For the plot to work, we have to gloss over a few realities: For Linda, a penniless waitress who resorts to stealing a birthday present for her father, how hard is it to “fall in love” with a millionaire? For Arthur, simply promising to give up his riches to marry her is also vapid, as he has no idea what the lower classes have to do to survive. When Linda rejects Arthur, that is meant to signify that she doesn’t just want his money. When Arthur is cut out of the will and still pursues Linda, that is meant to signify he truly means to become a pauper for love. But everything works out fine in the end when Arthur gets the money AND the girl – so we never know for sure whether each of them could have held to their principles had the worst scenario transpired. Jobless and penniless soon creates loveless.

But wealth will at least always guarantee that you’ll be lovable. Even if it’s just a lovable arsehole.

• ARTHUR is the role that most people associate with Dudley Moore as a lovable, comedic drunk. Moore aficionados would be aware that his funniest work was produced earlier in the ’70s, on records with Peter Cook, in actual drunken studio sessions as DEREK AND CLIVE.

• In ARTHUR, Moore performs a jazzy version of Santa Claus Is Coming To Town on the piano, and Liza comments, “You look like Santa’s elf!” A few short years later, Dudley’s career would take a down turn when he did indeed play Santa’s elf in the weird SANTA CLAUS: THE MOVIE (1985).

• A gifted pianist, towards the end of his life Moore would tragically be stricken with a degenerative brain disorder, a palsy that robbed him of control of his hands and made him resemble a drunk!