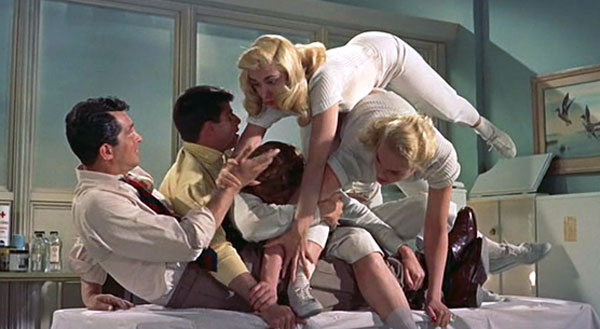 Any given day after sunset in the Martin-Lewis trailer.

Comics and comicbooks, cultures and vultures.

Colors scream louder than Jerry Lewis dreaming about Vincent the Vulture, catchy songs and willing dames, snappy writing and vivid characters careen at us in this 14th Martin and Lewis musical-comedy farce, ARTISTS AND MODELS.

Rock-chinned Eddie Mayehoff (THAT’S MY BOY), in another flamboyant performance, is publisher Murdock, who wants his Bat Lady comics filled with gore – something that Abby refuses to do for ethical reasons. However, Rick, for monetary reasons, secretly accepts a job for Murdock drawing a new comicbook – a torrid, gory space adventure cribbed from Eugene’s sleep-talking rants about Vincent the Vulture and Zooba the Magnificent…

There are three plot anomalies in ARTISTS AND MODELS:

ANOMALY ONE: Abby is shown refusing to insert gore into her Bat Lady comicbook – yet Eugene’s screaming nightmares are supposedly precisely because of the violent nature of his regular reading material, Bat Lady comics! (Also, does this mean she is out of a job, and that Bat Lady comics cease production? We are never told.)

ANOMALY TWO: Rick keeps his cartooning gig a secret from Eugene and Abby, or he would face their contempt for perpetuating violence in comics. (Abby and Eugene would even appear on a TV show deriding the bad influence of comics on kids. A hot button topic of the ‘50s, I remember the same illegitimate charges leveled against comics during my upbringing in the 70s.) After the Vincent The Vulture comicbook is a success, Rick can take the guilt no longer and quits Murdock’s company – but it is a shallow, wasted moment, because he gives no reasons for turning down barrels of money, and Eugene is never told that Rick quit OR that he even took the job in the first place. It is merely to appease the kid viewers whom Rick might be alienating with his duplicity. The anomaly comes when Rick’s betrayal is discovered (during ANOMALY THREE) – and nothing happens! So what was the point in quitting?!

ANOMALY THREE: The movie’s tone suddenly shifts from farcical to political in the last act, as the American military are introduced – and wherever the American military are, there follow Russian spies. And a Hungarian undercover femme fatale – wait! Have we landed in a James Bond movie?… It seems that Eugene’s fever dreams (which Rick tabulated verbatim) coincidentally contain a secret rocket formula, which the American Military discovers, to its chagrin, in Vincent comics (“General, my son purchased that comic at the corner store!”), and which the Russians desire. So begins the final chase, while the “Artists and Models Ball” is in progress, starring Rick and Eugene. (Wait! A cartoonist and writer are also singers and performers? Who woulda thunk?! And how broke can they possibly be if involved in such a large scale production? – ANOMALY FOUR?) Now keep in mind that this chase only exists because Rick stole Eugene’s ideas and published them in comics! No one stops to ponder this causation – they just exist in the moment, fleeing and punching and yelling. But after the fracas has quieted, Rick is going to be in bigger trouble with his pals, for:

1) taking the violent comics job that
2) Abby turned down, and
3) stealing Eugene’s ideas without crediting him! 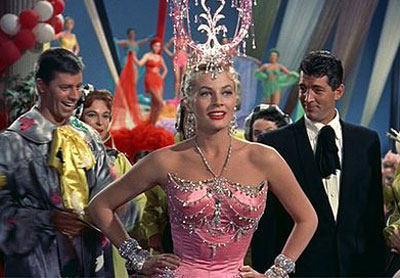 Anita Ekberg’s stage direction: Shut up and be pretty.

Rick’s reconciliation pertains only to his “cheating.” But the cheating issue with the femme fatale (Eva Gabor, Zsa Zsa’s sister) is a sophomoric misunderstanding. What might have happened if Abby discovered the real ethical betrayal of Rick’s cartooning job?

Shouldn’t the compelling arcs have been Eugene and Abby falling out with Rick (as best friend and girlfriend), and then reconciling with him when Rick tells Murdock to shove it? Wouldn’t the denouement work better if both cartoonists, Rick and Abby, start their own comicbook with original ideas rather than stolen ones, and that comic was a success?

But no. Those three anomalies are just ignored out of existence as the film wraps with Rick’s and Eugene’s double wedding.

It may seem like I’ve gone a long way to deconstruct what is in essence another Martin-Lewis kiddie comedy with emphasis on laffs rather than plot, but these anomalies are glaring, and may have contributed to the critics lambasting ARTISTS AND MODELS upon its release.

As a Martin-Lewis vehicle, ARTISTS AND MODELS is one of their better offerings, for its many hilarious moments (the “fat lady and the Bat Lady” bit; Eugene on TV admitting he’s “a little retarded”; Eugene in his Freddie Fieldmouse costume), and for the fact that Martin and Lewis seem on great terms during the production.

Adapted from a play by Michael Davidson and Norman Lessing, screenplayed by Herbert Baker (JUMPING JACKS, SCARED STIFF), Hal Kanter (MONEY FROM HOME) and Frank Tashlin (also director), ARTISTS AND MODELS boasts three pretty catchy songs: the title track (first sung by Dean during opening credits, then by Dean and Jerry during the ball), Jerry’s When You Pretend (which also closes the film), and Dean’s Innamorata (reprised by MacLaine). God knows why I find some of the Martin-Lewis song catalogue catchy and some insufferable; maybe the reprises sealed these songs’ catchiness?

After the mature love interest granted Jerry in MONEY FROM HOME, four films later he has another (MacLaine), but she has reverted to an infantile type again, because he is playing his “nine-year-old” character. MacLaine (one of few women who can look cute and sexy in short hair) reflects the tenor of the times with her spiels on astrology and numerology (although she is probably bringing her own delusions into that character as well!).

Of the many connections and references in the film: 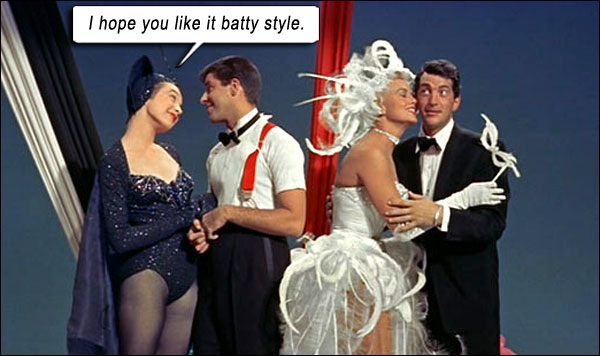 There is one touching moment where Jerry can be seen channeling his greatest influence, Chaplin: When Rick threatens to leave their apartment and packs his bag, Eugene comes to stand at the doorway, his back to camera. No shouting, no big gestures, no comedy; over Eugene’s shoulder, we see Rick look up at Eugene, then bow his head in sadness and slowly, wordlessly, start unpacking his hastily-packed bag. We cut to Eugene, smiling, with trails of tears running down his face. It’s a moment which threatens to elevate the film into real emotion, but the next scene is Jerry shouting about Vincent the Vulture again…

Behind the scenes, Jerry was feeling his power grow, and feuding with producer Hal Wallis more openly, yet working with director Tashlin more collaboratively (a precursor to his coming ascendance to auteur). Dean was, as usual, Dean, staying in the background letting “the kid” run things.

One of their songs describes everything about this movie’s omission of emotional plot points, the real life tangles that Jerry and Dean got into with their producers and staff, and the treacly ending of the movie itself:

“Life is full of happy endings / When you pretend.”