A man-size Jack in a girl-size film. 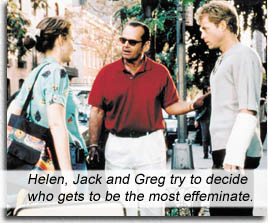 Saw this movie at the cinema with a male friend. We were two men – men who discovered the wheel and built the Eiffel Tower out of metal and brawn. And AS GOOD AS IT GETS blindsided us.

The marketing was smart. Yes, Helen Hunt and Jack Nicholson were probably going to end up a “romantic couple,” but the trailers appealed to the man of brawn in each of us, showing us off-kilter Jack; an obsessive-compulsive author who tells it like it is, insulting and alienating himself along the way with men, women and other social castes; he didn’t step on cracks in the footpath AND he put the weaker sex in their place. It looked biting. It looked cruelly funny. It looked… manly.

But in the film’s final moments, Helen Hunt spews a line that only a Girly Movie can’t be criminally prosecuted for, “Why can’t I just have a normal boyfriend?” Isn’t she a little old and cynical to be using that juvenile term? And is that all this farce was aiming towards? The pabulum of girlfriend/boyfriend-ism?

Cuba Gooding Jr. had to play feyer than a hairdresser for this? Greg Kinnear had to be a gay artist and get bashed and robbed by Skeet Ulrich for this? Helen Hunt had to be a waitress and have a sick kid which fortified her against Jack’s insults for this?

And suddenly – it didn’t feel so comfortable sitting next to another man in that theater. We gulped hard, hoping no one would see us two men attending this Chick Flick with no girly dates having dragged us here. Uh, we came to see Jack, really we did; we came for the insults and uh, the insouciant philandering and uh, the lies that make chicks cry inconsolably and uh – how about them Dolphins, hey?