The Shooting of an Olde Worlde Epic by a New World Filmmaker.

This classical western draws us into 1800s Americana so richly that we feel our teeth rotting from lack of dentistry not invented yet. 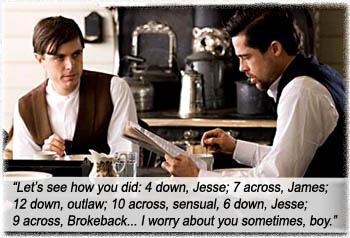 Written and directed by Andrew Dominik (from a book by Ron Hansen), THE ASSASSINATION OF JESSE JAMES BY THE COWARD ROBERT FORD is a study in authenticity; the set dressing, weaponry, music, the arcane vernacular of the characters, even the wordy title itself transports us back to grainy film and honky-tonk pianos, thrusting us bodily into the grimy, wild, paranoid frontier that was romanticized beyond its harsh reality.

Dominik’s photoplay is a deconstruction and a rambling paean to a bygone era. And, at 160 minutes, way too long for the iPod generation…

Jesse James (foreboding Brad Pitt) is already a legend when we meet him. Nineteen year old Robert Ford (whining Casey Affleck) is obsessed with everything Jesse, collecting and poring over every dimestore paperback featuring the outlaw, now starstruck that he rides with the man himself. Vouched for by his brother Charley (Sam Rockwell), Robert comes onboard a ragtag new James Gang assembled for one last job by Jesse and brother Frank (mighty Sam Shepard).

Even Jesse senses there is something peculiar about Robert’s hero worship: “I can’t figure it out: Do you wanna be like me – or do you wanna be me?”

A tragic, insecure, yet dangerously ambitious runt, Robert Ford wants the fame that riding alongside the infamous Jesse James will bring. When the gang fragments and Robert finds himself still a nobody, he sees one last stab at fame in being Jesse James’s assassin.

A narrator lifts passages directly from the Ron Hansen book that inspired the film. Not only is there an ancient poetry in the words: “…and the omens promised bad luck which moated and dungeoned him,” the accompanying scenes look like 1800s photographs, with the edges of the screen blurred. There is so much detailed thought that has gone into making this movie experience an ancient wonder that–

–it is almost a pain to watch!

You heard me, Movie Maniac. ASSASSINATION OF JESSE JAMES seems to come at us through a time warp from the 1800s, as every aspect that elevates it also detracts from its “modern” enjoyment. It might be called “controlled direction” but we can also say that events unfold in this movie with the rapidity of swimming through tar; we can call it challenging to listen to the olde worlde vernacular, but most of the time, it is ear-strain, and I had to turn on the English subtitles (“for the hearing impaired” – that always gets me!) if I was ever to decipher their jargon: “I’ll say, How come an off-scouring of creation like you is still sucking air when so many of mine are in coffins? I’ll say, How did you get to reach your 20th birthday without leaking out all over your clothes? And if I don’t like his attitude, I will slit that phildoodle so deep he will flop on the floor like a fish!” Without subtitles, you ask yourself, “Did he just say what I thought he said?”

ASSASSINATION OF JESSE JAMES is very successful at creating the paranoia of Jesse and all those around him, Jesse unceremoniously killing ex-gang members if he caught a whiff of betrayal in the air. He may have been the prettiest of the gang, but he was also the most unbalanced, prone to mood swings that would make a high maintenance girlfriend look almost sane.

Though the film’s title suggests Jesse James was an honorable man betrayed, we realize its irony in the film’s depiction of Jesse as a wary coward himself, so paranoid that he would stoop to any lengths to stay one step ahead of the law or the people who might betray him, not averse to torturing young boys for information or shooting friends in the back.

This is not a shoot-em-up western, yet all the violence is sudden and unflinching, therefore more dreadful than the glamorized violence we’ve grown inured to. The realism of the guns sounding like cap pistols and head-smacks sounding like bone on meat makes us realize how much fantasy we’ve been listening to all these years, from the cannon reports of FISTFUL OF DOLLARS to the wet-towel punches of any John Wayne west-fest.

On April 3, 1882, Robert Ford shot Jesse James in the back of the head. Jesse was not wearing his guns.

For a while, Robert Ford seemed to get what he wanted, as he became more recognizable than the president, touring with a stage play recreating Jesse’s final moments, with his brother Charley playing Jesse and Robert reprising his own ignominious role.

Only after Jesse’s death do we realize this tale is Ford’s point of view, as the movie continues for another half hour in a world where Jesse James is dead. Robert’s star would rise in the aftermath of the killing, only to plummet as the Legend of Jesse James grew into romanticized pulp.

By the time Robert Ford was shot down himself for being the “coward who shot Jesse James” – by a nobody named Edward O’Kelly – his spirit was at such a low ebb that he welcomed it.

An ambitious movie, with power names on the production credits: David Valdes (UNFORGIVEN), Brad Grey (THE DEPARTED), Ridley Scott (AMERICAN GANGSTER), and Brad Pitt himself; DP Roger Deakins (NO COUNTRY FOR OLD MEN); music by Nick Cave – even a cameo by Clinton dogsbody, James Carville, playing an iron-fisted governor, of all things. Andrew Dominik brings back epic, emotional filmmaking to this world stunted with Transformers and Iron Men.