When the cute robots take over the skyways…

The points in his hair are as iconic as Mickey Mouse’s ears; they exist in their own reality, where they are always seen, no matter the angle of his head! 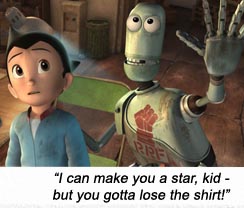 It’s ASTRO BOY, Osamu Tezuka’s manga creation from the 1950s. Cartooned in the 1960s in Japan, then re-cartooned in the ’80s (remember those cute cartoons with his big pointy head and bigger eyes, where they couldn’t even synch the “Oouah!” exclamation – over a mouth position that looked like “Oouah!”?); now re-rendered in CG animation – where Astro’s spikes must necessarily migrate from one side of his head to the other in different shots so we can still always see them. (These things affect me; what can I say?)The cartoon was cuter because his head was bigger. Still, ASTRO BOY has a lot of heart; it’s an adult cartoon clothed in tiny metal undies and yeti boots.

Young Brit Freddie Highmore voices the 2009 Astro, speaking with an American accent – but isn’t Astro (aka “Tetsuwan Atomu,” “Iron Arm Atom”) Japanese? He was styled like a 10-year-old boy in the cartoons, but here, Astro is definitely at an older age of latent lust, so that he can tent his metal undies in the direction of tween Cora (voiced by Kristen Bell, whose spinner blondness surely deserves tenting ovations, if it weren’t for Astro being a robot whose man-apparatus, we suspect, is non-existent). Onward…

Like a junior version of FRANKENSTEIN meets PET SEMATARY, Astro starts as a human boy named Toby, who is disintegrated in a lab experiment. Very gruesome. In the throes of despair, Toby’s scientist father, Dr. Tenma (Nicolas Cage) recreates his son as a robot, implanting all Toby’s memories and breathing life into his creation with an inexplicable “blue energy life force.” Tenma ultimately rejects the robot boy for reminding him of his lost son (uh, I thought that was the idea) in a sad scene, that also raises questions about artificial intelligence.

How do we discern between true emotion and “programmed” emotion? Toby loves Tenma as a father because Tenma programmed Toby that way. Though aren’t we all “programmed” from youth with principles, fears, insecurities, and a love for yeti boots? What is “love” from a child toward its parents except devotion/gratitude for sustenance and protection? But Tenma wants “real love” from the young automaton – whatever that is – not programmed love.

The themes are deep, and rife for endless discussion, over resurrection (for Christies), anatta (for Buddhies), soul transmigration (for Hindies) and katra (for Vulcans).

But to keep it light (for kiddies), light up those yeti boots and let’s punch some evil robots!

Astro lives on Metro City, floating above Earth, the Metro government dumping their garbage on Earth’s surface. After discovering his super powers (flight, super strength, power rays – and butt guns! Now I get it: Ass-tro Boy!), a chase scene leaves Astro stranded and an exile on Earth’s surface, where he meets Cora and her outlaw gang of kids – and a dog-bot named Trashcan who reminds us of R2-D2. As Astro must go through adversity trying to regain his home and father, movie takes on shades of Pinocchio. Ironically, Astro also gets wood for Cora.

Matt Lucas (LITTLE BRITAIN) is Sparx, heading a trio of British robots (The Robot Revolutionary Front) who have been watching too much Python. Very interesting that the robots of this world are acquainted with Asimov’s Three Laws of Robotics.

Donald Sutherland is the evil president of Metro City, whose campaign slogan is, “It’s Not Time For Change” (obviously styled after John Boehner), who is subsumed by the giant evil robot whose life force is the “red energy.” (Get it? Blue, good, democrats; red, evil, Republicans.)

Astro proves his worth as an all-round effeminate nice guy by battling robots and doing good deeds (he even holds up the whole of Metro City, which makes him pretty much as strong as Superman), but this movie’s mettle is revealed when Astro is called upon to make the ultimate sacrifice – and he never flinches – as he goes Shirtless Kirk in his death plunge into the heart of the evil Republican robot. The mark of a true hero, the likes of which senile coward John McCain could never fathom.

Even though everyone treats Astro like a unique creation, his father should have Astro’s master files somewhere, so if Astro “dies” it should not be too much of a task to download another Toby robot. At least, not as hard as getting a Republican to stop lying. And the “blue energy” that makes Astro kind and strong and metrosexual is also merely a matter of technology. (Astro’s sacrifice is diluted if we realize this, so they treat him as a one-off, almost as if he has become a Real Boy at the climax… cough–Pinocchio.)