Keep The Nuts Out!

To cut straight to the chase, my enjoyment of articles such as your planetary grouping segment (April 9, 2002) is somewhat diluted when I see credibility afforded The Nuts that abound among us – I’m speaking of astrologers and all things astrological. (As Stephen Jay Gould has pointed out, it seems a tragedy of the English language idiom that semantics portend the deeper meaning behind words, when words are merely reference tools; what does the word ‘logical’ have to do with anything that an ‘astrologer’ purveys? – yet there it is, deeply cemented as the second half of the word, implying subliminally that their bean-curd has some grounding in rationality.)

I am enthralled by all things astronomical – the wonders of the true physical universe, boundless in its seemingly locked-bag of bafflings (dark matter, superstring theory, gravity waves) and am almost as amazed at the boundless STUPIDITY displayed among entities of my own species when they term themselves ‘Christians with free will’ and then advocate predestination caused by planet positions!

My point: I was shocked to see at the bottom of your aforementioned article, a link to “Read more about why alignments are significant to astrologers.” Let’s face it, Planetary Society: whether alignments (which, as Geoff Chester points out, are almost statistically impossible) are significant to astrologers or not, means absolutely nothing – because astrologers are insignificant from the outset! Their “professions/vocations” mean ZERO; they “predict” nothing; they have no planetary knowledge; they can’t even hold a decent conversation without making me want to hit them with my shoe until we’re both crying.

How many times have I asked astrologers, “You say that Mars is in retrograde now – do you know what retrograde means? Do you know where Mars actually is right now? Can you even point to it in the night sky?” Invariably, they leave my presence as they see me bend down to get my shoe. 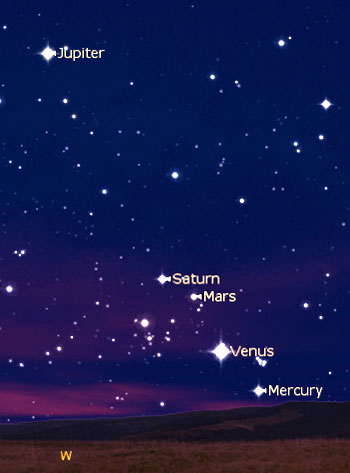 Five naked eye planets: Mercury, Venus, Mars, Jupiter, Saturn – all of which have nothing to do with anyone!

In trying to eradicate superstition from the mind of humanity, one must forego affording it any kind of credibility whatsoever. The best way to do this is to ignore it. Don’t even attempt to explain its inconsistencies or irrationalities, for in doing so, we lose from the outset – we have fallen into the trap of making it real enough to care passionately about, even if those passions are aimed against it. The more that those terms and irrationalities are seen in print or mentioned, the more they are solidified as ‘real’ to the weak-minded, whose only solace from the world in which they are too IGNINT to eke a respectable living are these fantasy idioms which place them at the center of things – anthropocentrism raised to universal proportions. (If I remember correctly, it was this same universal anthropocentrism which vilified Galileo – how the hell has it survived through the Renaissance into the Technological Age? But nowadays, the geocentrism and anthropocentrism is more subtle: so the Great Unwashed will accede that the Earth revolves around a star. But they believe that that star and its attendant planetary system are actually affecting their nonsensical, irrelevant lives – in essence, that the planets are revolving around them!)

A friend recently commented that he should stop using words like “retard” and “moron” because people might get offended. I pointed out that those words are specifically designed to offend people so that they might change their retarded and moronic ways. (No one is going to call Stephen Hawking a retard, because the connotation of that word has degenerated to only cover real idiots. If you’re behaving like an idiot, someone needs to tell you so, otherwise you’d never learn nuthin.) The technical definitions of idiot, imbecile, feeble-minded, etc. are not up for discussion here; Stephen Jay Gould does a bang-up job of re-visioning these particular misnomers in his book, The Mismeasure Of Man.

If we simply let the retards of this world keep on promulgating the fecal matter that they maintain as truth, we do a disservice to all the incredible thinkers who have wrought us to this stage in our technological and social development; who have inspired us to continue the search for the real universal truths. By allowing the morons to infiltrate your sobriety, you sully everything that is established in your factual article, in giving them as much a right to voice their idiotic mumblings as a scientist with a clutch of degrees.

I implore you, Planetary Society: please cease this politically-correct compromise. Desist with the cretinous links to irrelevant sites. Flense the fools from your corridors of knowledge, keep the birdbrains at bay. Fill the moat. Raise the drawbridge. Here, you can borrow my shoe…

“Astrology” rears its retarded head.
When the five naked-eye planets of this solar system clustered apparently together in the noon sky of April 2002, The Planetary Society (of which I was a member at the time) ran an article online describing this rare line-of-sight event, written by Geoff Chester.

Under that article was a link to an “astrology” article on the same topic! Titled, “Read more about why alignments are significant to astrologers.” I couldn’t believe what I was seeing! Hence this e-mail addressed to the Planetary Society, imploring sensibility and to: