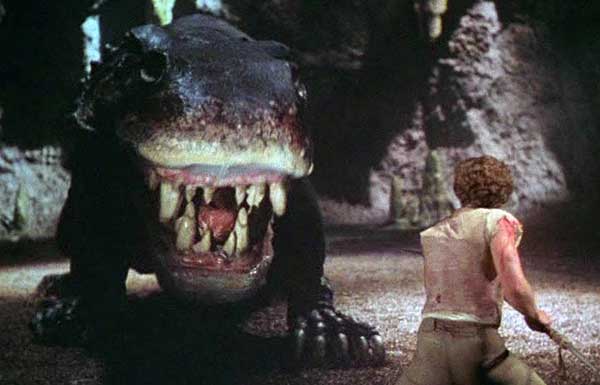 Director: “Watch out you don’t poke a hole in the screen, Doug!”

Rotten to the Core.

Much like the 1975 film THE LAND THAT TIME FORGOT, Doug McClure once again discovers a prehistoric land AT THE EARTH’S CORE. And he must once again battle unevolved natives and outlandish beasts to survive. However this time, the beasts are not dinosaurs, but actual monsters, ruled over by giant telepathic bird-things (or maybe just guys in rubber suits) called Mahars, that McClure defeats with his Sweet American Right Hook. 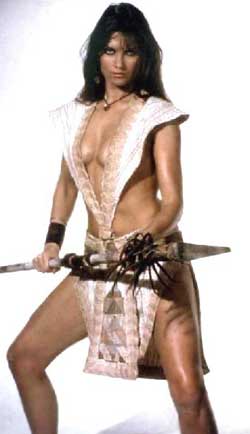 Before fire, before speech, before civilization – caveman wet dreams.

Lifted from the 1914 Edgar Rice Burroughs novel of the same name (the first in his hollow Earth/Pellucidar series), movie opens at a British test site where two men are preparing to travel through the Welsh hills in a gargantuan drilling machine called The Iron Mole. The men are professor Abner Perry (Peter Cushing, overseeing the Mole’s construction like a Grand Moff Tarkin, until called upon to overact like a potty old English scientist) and his financier/student David (McClure, doing some kind of Vaudeville Overacting. Keith Barron is here as a reporter (he was the captain of the sub in LAND THAT TIME FORGOT).

Not to be confused with another Burroughs story, Tarzan at The Earth’s Core, 1930 (unless you want to squint real hard and imagine doughy McClure as the Lord of the Apes), the story finds our scientists thrown off course by the exigencies of drilling into the Earth in an obviously non-scientific apparatus. When they come to a stop, Abner estimates they are near the Earth’s core, even though they’re in a lush plastic jungle.

After being chased by a towering squawking bird-thing, they are captured by humanoid natives and linked on a chain gang with other humans, many of whom are wearing quite obvious Harpo wigs for no apparent reason. Amongst the chained humans – Carolyn Munro as Dia the cavegirl (who knew they had mascara and push-up bras at the Earth’s core? Is she the sexiest woman alive? Poffy say yes!).

The chain gang passes by a couple of brontotherium-like creatures battling. Just for the sake of it, I guess. Then they are taken to a cave where they discover the humanoids are subjects to ruling giant birds, which pick off the humans for food.

David escapes the chain gang by using his Sweet American Right Hook, teams up with another escaped cavemen, and returns to rescue Abner and the hottest chick on (or under) the Earth. The strange thing is that by now, McClure’s Vaudeville Overacting has been replaced by the generic American Heterosexual Male Laconic Hero. Thus, it is no surprise his sleeves are gone, baring his doughy guns. He has literally turned into himself in THE LAND THAT TIME FORGOT, probably because he forgot which forgotten Land he was supposedly in, his mind probably on his next contracted picture, the sequel to LAND THAT TIME FORGOT – THE PEOPLE THAT TIME FORGOT (1977). More like the career that forgot Doug… 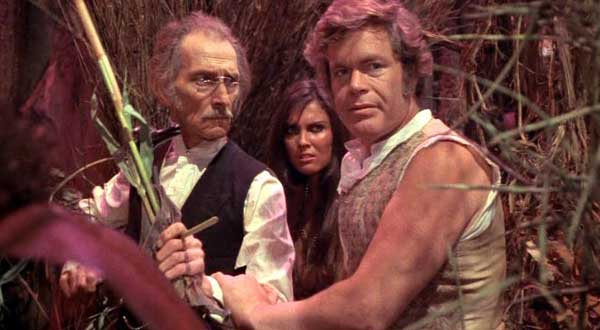 “You stay here. Maybe I can scare them off with my massive guns.”

Screenplayed by Milton Subotsky, and directed by Kevin Connor (who also directed LAND THAT TIME FORGOT), the ecosystem Burroughs was trying to create is lost amongst the cheesy effects and rubber monsters. And McClure’s manliness is belied by his dual acting method that confuses the tone of the movie. When we were kids, we loved these reptilian creatures and rear-projections that fooled us into believing the monsters and men were in the same scene, but now it’s quite laughable to watch McClure taking these action scenes so seriously.

The Iron Mole escapes by drilling on through the Earth and comes out on the White House lawn. And Doug McClure brings ripped-off sleeves to America, kickstarting Bruce Springsteen’s career. From Britain to… uh, meaning they didn’t dig straight through the Earth, but at a considerable half-assed angle. Kinda like the angle that Doug McClure’s career took with these prehistoric movies…