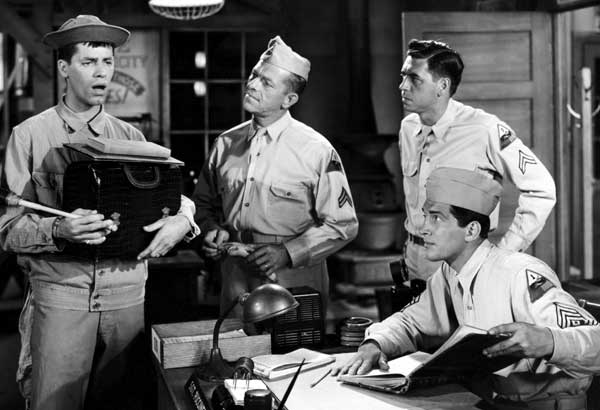 Fall down, yell, or pull a face; the audience is waiting…

Technically, the first film appearance of “Martin and Lewis” is MY FRIEND IRMA (1949), where they played B-characters to the two female leads. AT WAR WITH THE ARMY is the first starring vehicle for the world’s premier comedy team at the time – Dean Martin and Jerry Lewis. The most amazing thing about this stagnant yawner is that it launched their film career into the stratosphere.

AT WAR is set during WWII at a military base, where Vic (Dean Martin) and Alvin (Jerry Lewis) are buddies who used to perform together at nightclubs, now in the army as Sergeant and Private, which strains their relationship. Movie opens with Alvin as the army cook, doing a musical number. (To Millennials: A “musical number” was when an actor started singing an irrelevant song during the action, complete with orchestral backing, though there is no orchestra in the scene. It grinds any film to a halt, and personally, I can only take it in very small doses, even in films which I love. The only exception to this rule is JESUS CHRIST SUPERSTAR, which was musically magnificent.)

Sergeant Vic enters and expositions all over Alvin: “Just because we were friends before, and used to work together…” (I guess all those books on clunky screenwriting have yet to be written.) Vic also sets up Alvin’s premise, “You’re going on a long journey and you might not be back…” which should be the underlying plot point, but which is quickly forgotten in lieu of gags.

At this point in their career, Martin and Lewis were already the hottest act in America, from their stints on the nightclub circuit, television and radio, at one point, the “highest paid act in show business” (LIFE Magazine). Though they had their crooner-monkeyboy comedy act down for nightclubs and TV, I presume director Hal Walker had yet to find a filmic stride for the superstars. Though he plays his “nine-year-old” character (with the squeaky voice, pout and slouch), Lewis seems reined in, not as frenetic as we’re used to seeing him in live performances, and Martin’s impatience with the rambunctious Lewis comes off as a bit too mean-spirited. So though Martin and Lewis found their comic stride as B-characters during MY FRIEND IRMA GOES WEST, they need to re-jigger that formula as stars of their own movie.

AT WAR seems too concerned with its storyline, rather than its comedy, or even working that comedy into its storyline. People walk in and out of rooms, dialogue and leave; Alvin comes in constantly to try for a three-day pass and Vic keeps shouting at him, all while B-characters wander in and out of frame with their own mundane subplots (usually involving “dames”), while the camera holds static shots of all the rooms the action takes place in. (How long can they draw this out? Answer: the whole movie!)

SOPRANOS fans, note Martin’s redheaded date, Helen. That’s Polly Bergen, young as sin, who, as an old woman, would regale Tony Soprano with tales of her halcyon days dating Jack Kennedy and Frank, in the episode In Camelot.

There is a scene in the third act (after much nothing in the first and second acts) where we eventually see Martin and Lewis in their element, recreating a nightclub act for their fellow soldiers. Their expertise at synchronized tap-dancing, and their ease at commanding attention is a wonder to behold. Then it unfortunately returns to the movie storyline…

Women are treated like airheads or sex objects. And the movie seems to be militarily-themed simply because that was the trendy thing to do in that decade after WWII. Easy to get the costumes. During training maneuvers, Alvin performs some unintended slapstick and a drill sergeant laments to him, “Alvin, you gotta stop this clownin’!”

Uh, Sarge, we were waiting for him to start…